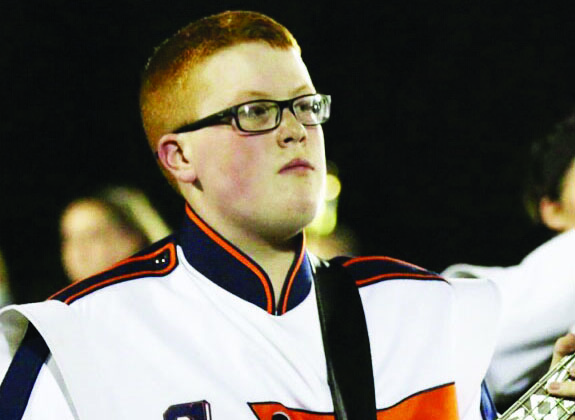 CHINA GROVE — It took less than a month for Shannon Cheeseman’s life to turn upside down.

On Oct. 7, Cheeseman took her son, Logan, to the emergency room with a high fever. A few days later, Logan was diagnosed with cancer.

“We just had no idea,” Cheeseman said.

Logan, 14, a freshman at Jesse C. Carson High School, is a humble, music-loving kid who’s active in his church and school.

For the past year and a half, she said, Logan has been sick off and on. But the family’s worries were always dismissed.

“We’d take him to the doctor, and they’d say he had a sinus infection,” she said.

But in early October, another bout of illness ended with a constant, 103-degree fever. Cheeseman took Logan to the hospital. That was when a chest X-ray showed something unusual.

Logan was transported to Levine Children’s Hospital in Charlotte, where tests confirmed he had cancer. He was diagnosed with Hodgkin’s lymphoma on Oct. 11. Two days later, he started chemotherapy.

For Logan and his family, there’s nothing to do but move forward.

“It’s here; we have to deal with it,” Cheeseman said of the cancer.

Hodgkin’s lymphoma has a sudden onset, doctors told the Cheesemans, so it’s unlikely that Logan has had it for a long time. Logan is at Stage 4B, but Hodgkin’s is also measured differently than other cancers.

“It’s the amount, not the severity,” Cheeseman was told.

Stage 4B means that Logan has four affected areas in his chest. His mother said he’s been prone to coughing and high fever.

The family has found support in each other — including father Chad and older brother Jacob — and in the community.

“So many people have been so supportive of him,” Cheeseman said.

When Logan was diagnosed, the family’s church, Ebenezer Lutheran, took up collections for them and delivered care packages. Cheeseman said the family’s faith has kept them going.

Members of the Carson band, of which Logan is a member, wear ribbons on their marching outfits and had hats with his initials made.

Former teachers at Bostian Elementary and China Grove Middle schools have sent cards, and Carson has helped arrange homebound schooling. And when Logan’s hair began to fall out from chemo, his hometown barber made the trek to Levine to give him a new look.

Carson High School and others who are connected with Logan have been raising money to help cover his medical bills and medication, as well.

But the family’s most important supporter has been Logan himself.

Even on that first ride to Levine, when no one knew what was happening, Logan kept his chin up and encouraged her.

“He always thinks of the positive when things happen — when anything happens,” Cheeseman said.

When at the hospital, he talks to staff members and makes witty remarks to doctors. When nurses come into his room, they say, “You’re the kid that always plays all the instruments.”

They ask him to bring his guitar and play them a tune. One of these days, Cheeseman said, he’s planning to.

But it hasn’t been easy.

For the past month, Logan has been in and out of the hospital for more than chemo. His recent sickness is something doctors and his family hope is nothing more than an allergic reaction to some of his medications.

“We just have to deal with what we have. Just one day at a time, is all I can say,” Cheeseman said.

There is good news. Logan started his second round of chemo — out of five — recently, and the cancer has already shrunk.

Cheeseman said there’s no doubt in her son’s mind that he’ll come out victorious.

Those interested in donating to help Logan’s family cover medical costs may do so at https://www.gofundme.com/ktaz4p-loganstrong.