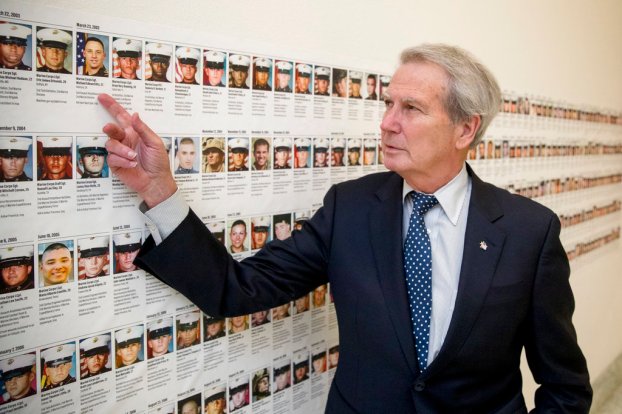 Rep. Walter Jones, R-N.C. points at a photograph of Marine Sgt. Michael Edward Bits of Ventura, Calif., the first military funeral he and his wife attended, and one of the many pictures of soldiers killed this century based in Camp Lejeune along a hallway leading to his office on Capitol Hill in Washington. (AP Photo/Andrew Harnik)

Other voices: Lessons of war, letter by letter

By all indications, Republican Rep. Walter Jones of Eastern North Carolina is a man who has learned the lesson of war: It’s real and it has permanent consequences.

More than 11,000 times in the last 14 years, Jones, a Republican who represents the 3rd congressional district of North Carolina, has signed letters to family members of troops who died in service, The Associated Press reported recently.

Jones signs the form letters personally with the same pen. And he asks permission from a military liaison who makes sure that family members want to hear from him. He says his dedication is penance for voting in favor of the Iraq war in 2002, a war he believes was based on unfounded claims of Iraq’s possession of weapons of mass destruction.

“For me, it’s a sacred responsibility that I have to communicate my condolences to a family,” Jones told the AP recently in a telephone interview.

“Obviously, the majority of these families will never know me and vice versa,” Jones told the AP. “But I want them to know that my heart aches as their heart aches.”

Janina Bitz-Vasquez, the widow of a Marine whose funeral Jones attended in 2003, says that Jones’ letter writing “sets a standard for taking personal responsibility and accountability” for other political and military leaders.

She’s right. We wish every political official followed Jones’ example — and had his strong conscience. It might prevent future disasters.

President Trump has been rattling his sabre at both North Korea and, to a lesser degree, Iran for months.

Senators recently questioned Trump officials about his authority to launch a pre-emptive strike on Pyongyang. Congress takes the threat seriously, as it should. It’s best to also discuss war’s true cost now rather than in the heat of unpredictable events.

Jones has criticized President Trump for arguing with the widow of Sgt. La David Johnson, one of four soldiers killed in a firefight with militants tied to the Islamic State group in Niger earlier this fall. Jones has asked the Department of Defense for specifics regarding their deaths and the future of U.S. military personnel in Africa.

“The American people, specifically our military families, deserve to know what is going on when they send their sons and daughters to risk their lives for our country,” he said in a letter to the department.

The latest incarnations of Congress and the presidency should finally realize that wars seldom go as we plan, and there’s a steep human price involved.

We must finally learn the lesson: That price should never be taken lightly.

Colin Campbell: Municipal elections say a lot about our state

RALEIGH — An unusually contentious season of municipal elections has come to an end, and 2018 races for legislature and... read more