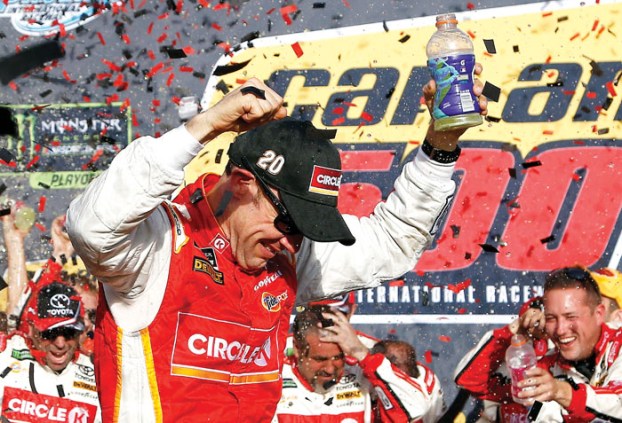 AVONDALE, Ariz. (AP) — Matt Kenseth doesn’t get to end his career the way he hoped. He thinks he’s got a handful of good years left in him, and can win races and compete for championships.

But, the economics of the sport have made Kenseth a casualty of NASCAR’s new youth movement. He doesn’t have a job for next year.

So he’s going away. But he’s not going quietly.

Kenseth won for the first time this season, snapping a 51-race winless streak, to earn one final victory celebration.

“Just got one race left and everybody dreams of going out a winner,” a tearful Kenseth said after climbing from his Toyota.

“It’s just been quite a journey, and today was a really special day for me, to know that next week is almost for sure my last week behind the wheel.”

Kenseth passed Chase Elliott with 10 laps remaining to win Sunday at Phoenix International Raceway and deny Elliott the final berth in next week’s championship race. Had Elliott hung on for the win, he would have qualified for the championship finale at Homestead-Miami Speedway.

Elliott finished second for the seventh time in his career.

Brad Keselowski earned the final spot in the championship on points because a playoff-eligible driver did not win the race. Keselowski will race Martin Truex Jr., Kyle Busch and Kevin Harvick for the championship next Sunday at Homestead. The field, two Toyota drivers and two Ford drivers, includes three former series champions and Truex, the most dominant driver of the season.

Kenseth had already been eliminated from the playoffs, so his victory was purely personal satisfaction. The 2003 NASCAR champion is a two-time Daytona 500 winner and consistent playoff driver, but he’s 45 and being replaced at Joe Gibbs Racing next season by Erik Jones.

Too expensive to land a competitive ride for next season, Kenseth has decided to take time away rather than drive a car that can’t win races.

“He’s been really down and frustrated and trying to figure out this season and what it’s all about, to try to go out there and try to win in his final season, not on his own terms final season,” said teammate Busch, one of many drivers to congratulate Kenseth.

“I think it shows that there’s no reason why he couldn’t have gotten a job anywhere else. It’s just, I guess, the industry didn’t see Matt Kenseth as their driver, and that’s really, really unfortunate because I love the guy and have raced with respect for him for a long, long time and will forever respect him for what he’s done for the sport.”

“I probably knew around August that it really wasn’t meant for me to be racing anymore at this level, you know, going forward,” Kenseth said. “I probably fought it for too long and kind of looked at different opportunities and thought about doing something different, but then just really embraced it.

“Not many people get to go out in really good cars and win races and have a chance to win a championship.  It’s really a blessing to be able to go to work every day and work as hard as you can on it, put everything into it that you’ve got and finally get one here.”

From staff reports The Livingstone women’s basketball team fell to 0-2 with a 73-47 loss to Bloomsburg on Sunday at... read more