Braised in the South food truck makes a stop in Salisbury 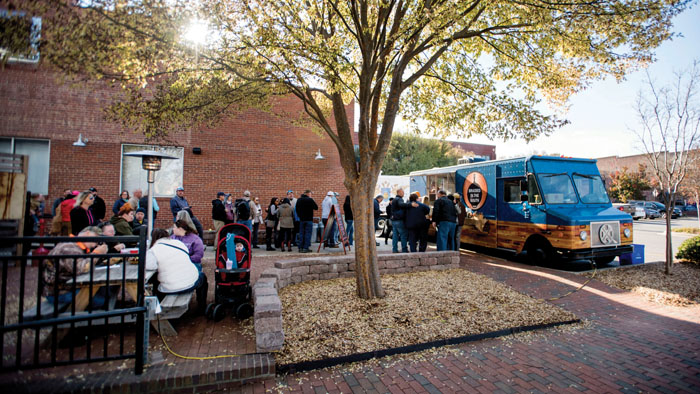 SALISBURY — The first words out of Sharon Alderidge’s mouth in between bites of food was that the food she was eating was “delicious.”

It was the most often repeated word Saturday among many who attended the the pop-up event for Braised in the South food truck held at New Sarum Brewery. The business, based in Charleston, and run by three friends — Nick Hunter, Steve Klatt and Brandon Lapp, was featured on season 8 of the Food Network show The Great Food Truck Race.

The men won the show earlier this year, which featured their southern-inspired food that included barbecue shrimp tacos and cajun chicken “totchos.”

Hunter’s wife, Brynn, was raised in Rowan County and when the men thought about a way to thank their adopted North Carolina family for the support of the show, they decided to bring the truck and some of the most popular items from their menu.

Hunter collected the orders, kept people smiling, rang everyone’s orders and even sold some of the B.I.T.S. merchandise on the side while Klatt and Lapp kept the food coming.

Alderidge said she’d been following the group on Facebook and knew Brynn and her family.

“It’s awesome that they came to Brynn’s hometown,” she said.

She ordered the totchos, which were tater tots layered with creme, smoked chicken, tomatoes and lettuce topped with homemade hot sacue.

Hunter said the men probably got the most support from North Carolina, Salisbury in particular, while they were on the show.

“We wanted to give back for all the love they showed us. It humbled us,” he said.

John Lanier along with his wife, Claudia; daughter Meagan Mooney and her husband, Dustin and their daughter Annelise.

Meagan said she followed the show toward the end of the season and they all wanted to try the food. Audra Loman and friend Marla Hathcock followed the event on social media and decided to try the food. The two friends made an afternoon of it and dined on totchos, homemade Moon Pies and lemonade and a beer from the brewery.

Michael and Caroline Cook are fans of New Sarum Brewery and the couple attended for some beer and food. Michael said he enjoys trying new food and was looking forward to trying Braised in the South.

Jessica Olson traveled from Portland, Maine, to be with her mother, brothers and their friend to try the food. Olson used to cheer with Brynn at East Rowan High and wanted to show support.

She mostly followed the food truck business on social media. Her brother’s friend, Robert Owens, who was visiting Salisbury for the first time said he enjoyed the meal.

When asked what he was most excited to try, the New York resident said everything caught his eye, but he settled on the braised brisket.

For more information about Braised in the South, visit their Facebook page at https://www.facebook.com/braisedinthesouth/