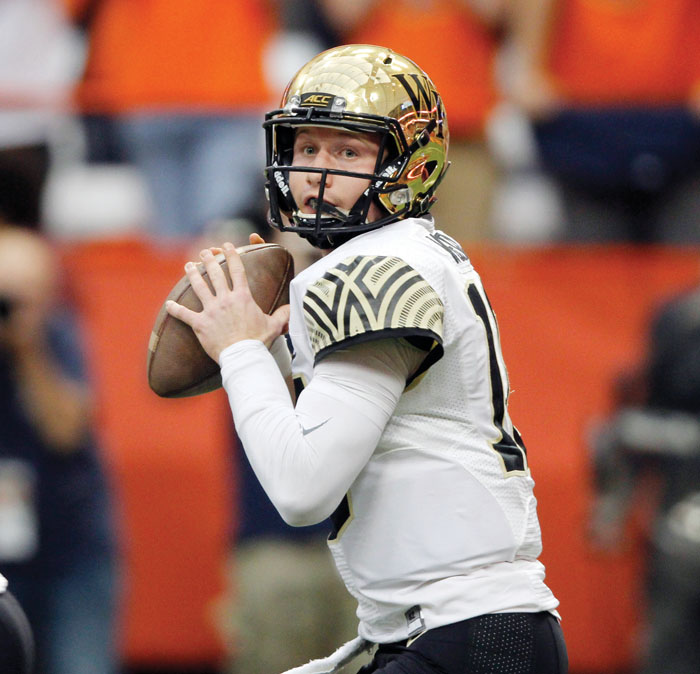 Syracuse had a 38-24 lead at halftime and held a 41-27 advantage with nine minutes left in the third quarter. But then it all fell apart for the Orange.

Led by a historic performance by quarterback John Wolford, Wake Forest (6-4, 3-3 Atlantic Coast Conference) stormed back for a 64-43 win over Syracuse (4-6, 2-4), outscoring the Orange 40-5 in the second half and clinching a bowl berth in the process.

“The defense played lights out in the second half and we obviously put up some points,” Wolford said in a classic understatement. “When you put all of those things together you’re going to come out with a win.”

“Obviously, John (Wolford), the offensive line, (running back) Matt Colburn (237 yards rushing) — it just goes on and on. It was a great win. It really was,” said Wake Forest head coach Dave Clawson.

The teams combined for an ACC-record 1,355 yards of total offense — 734 by Wake Forest, a school record, and 621 by Syracuse. Wake’s 64 points were the most ever for a Syracuse opponent in the 37-year history of the Carrier Dome.

“We’re extremely disappointed. We have to do a lot better than we what we did out there today,” said Syracuse coach Dino Babers.

Syracuse must win its final two games to secure its first bowl berth in four years. The Orange closes its season at home against Boston College.

Wolford passed for three touchdowns and ran for three more, accounting for 499 yards of total offense.

He was 25-of-38 for 363 yards passing and rushed for 136 more, the first 100-plus-yard game rushing in his career. He has accounted for 69 touchdowns in his career, shattering the school record of 65.

Babers credited Wake Forest with their second-half adjustments, and had high praise for Wolford.

“Their quarterback is a shifty guy, a fifth-year senior,” Babers said. “He knows all the tricks I thought the game he played was ‘Wow.’”

Alabama (10-0, 7-0 SEC, CFP No. 2) won its 10th straight game against Mississippi State, but this one was much more difficult than most of the others.

Mississippi State went three-and-out on the ensuing drive and Alabama took over with 1:09 remaining. That was more than enough time for the Tide, who drove six plays and 68 yards in 44 seconds for the game-winning score.

The game was tight throughout with neither team leading by more than a touchdown. Mississippi State pushed ahead 7-0 in the first quarter on an 11-yard touchdown run by Aeris Williams. It was the first touchdown the Bulldogs had scored against Alabama since 2014 and the first time they’d taken the lead against the Tide since 2008.

Banks ran it in from 16 yards out to give the Green Wave (4-6, 2-4 American Athletic Conference) the edge in overtime. He finished with 110 yards passing and 96 yards and two scores rushing.

East Carolina trailed 24-14 early in the fourth when Kiante Anderson recovered a Banks fumble, which the Pirates (2-8, 1-5) quickly converted into a field goal, closing the gap to 24-17 with 12:18 to play.

CLEMSON, S.C. (AP) — Travis Etienne always dreamed of helping his team win a title. It didn’t take very long for the freshman to turn that dream into reality at Clemson.

Etienne ran for 97 yards and two touchdowns to lead the fourth-ranked Tigers to a 31-14 victory over Florida State that clinched the team’s third straight ACC Atlantic Division title and a trip to the league championship game.

There could be a lot more smiling ahead as the Tigers (9-1, 7-1, No. 4 CFP) try for a third straight berth in the College Football Playoff. Their opponent in the ACC final will be No. 7 Miami, which wrapped up the Coastal Division with Virginia’s 38-21 loss to Louisville.

For Florida State (3-6, 3-5), it marked its first losing ACC record since 2006. And the Seminoles’ landmark streak of 35 straight bowl games is in jeopardy, too — they have three games left against Delaware State, rival Florida and Louisiana-Monroe.

Jones opened the game with a 91-yard return and made the score 14-7 later in the first quarter with an 87-yarder, tying an FBS record held by many.

Ahmad Bradshaw scored on an 18-yard run, Javhari Bourdeau returned a blocked punt for another touchdown, and Army beat mistake-prone Duke 21-16 on Saturday to finish the season unbeaten in six games at Michie Stadium.

It’s the first Army team to be perfect at home in a season since 1996. That the victory came on Veterans Day and two years after Duke had embarrassed the Black Knights 44-3 on their home turf made it that much more special.

Army (8-2), fresh from a dominating 21-0 victory at Air Force, has won six in a row. Duke (4-6) is headed in the opposite direction, having lost six straight, and now has to win its final two games to become eligible to play in a bowl game.

Duke was 4-1 in its previous five meetings with Army, but the Blue Devils were done in by the blocked kick and a lost fumble despite a staunch defensive effort.

CULLOWHEE (AP) — Tee Mitchell had 26 carries for 120 yards and a touchdown, Alex Lakes ran for 87 yards and two scores and Mercer held off Western Carolina 35-33 on Saturday.

Western Carolina drew to within 35-33  when Tyrie Adams completed a 48-yard touchdown pass to Terryon Robinson with 3:47 left in the game.

The Catamounts opted not to attempt an onside kick, and Mercer (5-5, 4-4 Southern Conference) picked up two first downs on the ensuing drive and proceeded to run out the clock.

Elon (8-2, 6-1) came in with an eight-game winning streak and tied atop the Colonial Athletic Association with top-ranked James Madison, the Phoenix’s opponent in next week’s regular-season finale.

ATLANTA (AP) — TaQuon Marshall made the most of his only two completions.

Marshall threw a pair of long scoring passes, including an 80-yarder to Ricky Jeune with 6½ minutes remaining , and Ajani Kerr swatted away a fourth-down pass in the end zone to preserve Georgia Tech’s 28-22 upset of No. 17 Virginia Tech on Saturday.

This one felt especially good for the Yellow Jackets (5-4, 4-3 Atlantic Coast Conference), who had lost three games by a total of six points .

The Hokies (7-3, 3-3 Atlantic Coast Conference) went ahead 22-21 when Greg Stroman returned an interception 24 yards for a touchdown off a terrible pass by Marshall with 7:27 left.

GREENSBORO (AP) — Lamar Raynard passed for 252 yards and two touchdowns and Marquell Cartwright ran for 127 yards and two scores to lead unbeaten North Carolina A&T to a 36-17 win over Savannah State on Saturday.

The victory clinched a share of the Mid-Eastern Athletic Conference title for the Aggies (10-0, 7-0). It’s NC A&T’s third conference title in the past four seasons and ninth overall. NC A&T and defending champion James Madison are the only undefeated teams left in the FCS.

Cartwright’s 1-yard TD run in the first quarter and two Noel Ruiz field goals staked the Aggies to a 13-3 halftime lead. Raynard, who has never lost in 24 starts for NC A&T, hooked up with Trey Scott for a 54-yard TD just three plays into the third quarter, but D’Vonn Gibbons answered with a 2-yard TD run to pull the Tigers (2-8, 2-5) within 19-10 at 11:39 in the third.

After a three-and-out for the Aggies, Jeremy Taylor picked off a Gibbons pass and returned it to the Tigers’ 2-yard line. Cartwright scored from the 1 three plays later and the Tigers extended the best season in school history.

Cartwright has 1,020 rushing yards on the season.

Gibbons ran for 93 yards and a score and passed for 137 and a TD with two interceptions for Savannah State.