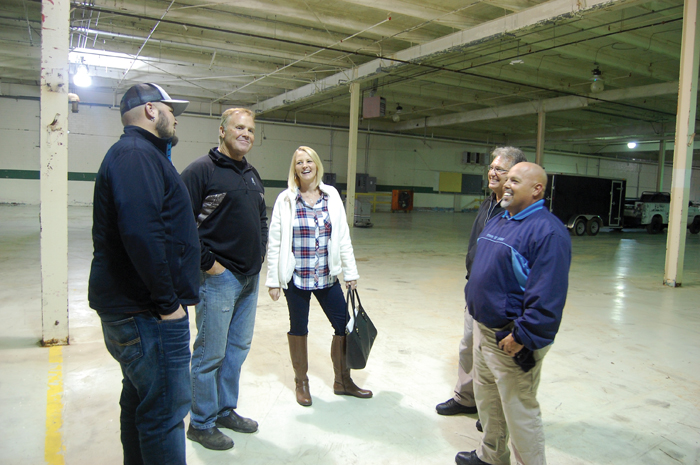 LANDIS — If, two years ago, you had asked NASCAR veteran Mike Wallace where Landis, North Carolina, is, he wouldn’t have been able to tell you.

“I’m going to be honest with you. I didn’t know where Landis was at,” Wallace said.

But, as a resident of what he calls the “Concord-Kannapolis corridor,” Wallace was able to find Landis relatively easily when it came time to find his next big project.

“I said, ‘OK, I’m going to put a parameter of 10 miles from my house and I’m just going to get, when I have spare time, I’m going to drive up and down every road I can find. Because you always hope you find the diamond in the rough,” Wallace said.

That diamond became the old Corriher Mill, located at 501 Main St. in Landis.

“This will be a metropolis someday, this 37 acres here,” Wallace said of the property.

Wallace bought the 37 acres — which includes two warehouse buildings and a baseball field — in January.

He said that he’s still not sure what he and his family want to do with it.

“The goal is — we’re business people, as much as anything else — is to turn this into a lucrative piece of property that has high benefits for all people involved,” Wallace said.

Town Manager Reed Linn said that, even with only a few months of work put into the property, the old mill looks better than it has in years.

“The last time we were in here, (there was) no electricity, the lights were out. There was just trash and debris all over the floor. Standing water. The roof had problems. So this was 100 times better than when we first came up,” Linn said.

Wallace said that town staff has been “great to work with,” especially considering Wallace didn’t ask for any government grants.

“They’re just nice about it. There’s other communities that we’ve dealt in (that) have just kind of got this…it’s like they think it’s a privilege for you to do business in their area, where the city of Landis is, like, ‘We’re happy you’re here. What can we help you with?’” Wallace said.

He said the town has been particularly helpful with things that he described as “on their side of the fence,” like turning the water back on at the property and helping cut down and remove trees that were interfering with power lines.

Wallace said that he and his family have thought of numerous ways that they can use the property. But he said it is important to him that it benefits the community in some way.

“I like buildings you can buy at a fair price and make look nice and the area works with you to make it look nice and you’re trying to enhance the whole area. This isn’t just all about me or us. It’s what can it do for the area,” Wallace said.

The first thing the Wallace family is planning to do with the space will serve not only Landis, but its surrounding towns and cities as well — a beer and wine festival.

The festival — called the Landis Beer and Wine Festival — is being organized by Wallace; his daughter, Lindsey Van Wingerden; and family friend and Charlotte radio personality Phil Tabakelis, better known as “Big Sexy.”

Tabakelis said that, for his job as a radio deejay for The New 103.7, he’s hosted beer and wine festivals all over the Charlotte area.

“And I was saying to Lindsey, why is there not one around here? Like, I’m tired of driving to South Charlotte to go have a good time or somewhere else when there’s a lot of people who drink beer and enjoy festivities here,” Tabakelis said.

Van Wingerden said that some portion of the festival’s proceeds would benefit the charity Bring It 4 Braylon, which raises money to help families dealing with pediatric cancer.

Wallace said that he hopes the event will also give potential leasers a chance to see the building and decide if it’s something they’d like to utilize.

For more information about the Beer and Wine Festival, contact Van Wingerden at landisbeerandwinefest@gmail.com.

For more information about the building, contact Boston Reid of Lead 2 Real Estate at bostonreid@me.com.