Veterans honored for their service on Veterans Day 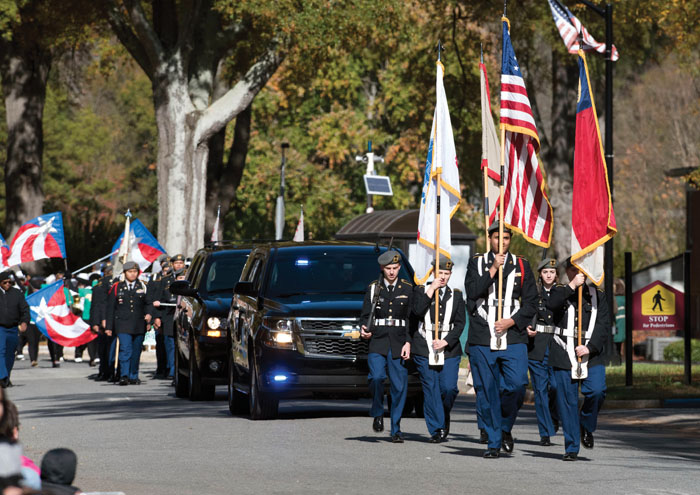 SALISBURY — Military veterans Basle Roberts and Tony Fleming graciously accepted the “thank yous” and handshakes from passersby during the annual Veterans Day parade. It was a welcome exchange, but a far cry from the treatment many men and women received decades ago on their journey home from war.

As the two friends sat on the back of a pickup truck parked on the Hefner VA Medical Center campus, they watched the parade together as they do nearly every year.

“It feels real good,” he said the accolades from strangers.

Roberts said he feels as though within the last few decades people have begun to get a sense of the sacrifices veterans like him have made for this country.

He said he really enjoys the spirit of the day and being together.

His father, Basle Roberts Sr., was also in the military and served in the Army during WWII during the Vietnam era.

Of his idea to join the military, Roberts said that’s what the young people in his day were doing — enlisting.

Fleming, a Rowan County native, said he attends the parade and makes sure he has a seat on the campus mostly for the camaraderie. He said it’s great to be able to watch the parade at the VA around men and women who understand about military service.

“The older folks, they are our mentors and with the sacrifices they made we are able to do what we do,” he said.

Fleming said it’s awesome to receive a thank you or a smile from strangers and children regarding his military service.

“That’s payment for your service. It’s an example of outward love,” he said.

Fleming served in the Air Force for 20 years and two months. Two of his uncles served in the Army and Navy, which he said influenced his military service.

“It was my pleasure to serve,” Fleming said.

Nichole Isabella said she wanted to watch her daughter, Trinity King, who is a Girl Scout march in the parade and to honor her father who served in the Army for a few years.

Her daughter, who is a member of Troop 3155 out of Milford Hills, also spends time at the VA visiting with veterans and playing Bingo.

Isabella lived in New York during Sept. 11 and says she has respect for military service men and women and first responders because she witnessed firsthand their selfless sacrifices on that day.

Ronnaldo King, who was also there to support their daughter, Trinity, said it’s great given the climate that the country is currently in that people can still reflect on the good that others do.

“At the end of the day people still appreciate those who served,” King said.

Thomas Wayne Goodman stood along the sidelines of the parade wearing his military hat and occasionally waving at the people in the cars.

Goodman, a native of East Spencer, served in the Air Force from 1962 to 1982. He maintained and refueled planes that would fly supplies in and out during the Vietnam War. He also helped unload and load the aircrafts. He spent time in Guam, the Phillippines, Da Nang and other places in Vietnam.

“I was afraid sometimes,” Goodman said of the bombs that were coming in overhead during the war.

Just before the annual parade, many of the veterans filled the community room for a Veterans Day ceremony where local heroes were honored.

North Carolina Rep. Carl Ford was the keynote speaker who spoke about honoring the men and women who fought and what the American flag meant to him. Ford said he wasn’t old enough for the draft and was 18 when the war was over.

“I stand for the flag. I appreciate what it means. It’s to honor those who fought for this country,” Ford said.

He said he thinks about what his freedom of speech grants him. He joked that he’s in the radio business and is a politician so he speaks a lot.

“I think there is a time and a way to protest,” he said.

He added there is a way and a place to do it.

“I appreciate the brave men and women every day. I pray for you every day,” Ford said.

“I cannot thank you enough for protecting us,” he said.

Ford said he had uncles who served in the military.

Vietnam veteran Ronnie Smith, who was a captain in the Air Force, read the names of the 40 deceased Vietnam veterans, some of who remain missing in action. Smith said he spent six years flying airplanes in the military where he carried medical supplies. He said on the way back from the war areas the planes weren’t filled with supplies, but the remains of those who died in combat.

“Some gave all, all gave some and today we are going to recognize all,” he said of the names.

Sue Wall and her sister Glenda Ball spoke of the legacy of their father, Hayden Lingle, who was a staff sergeant in the Army and was captured by the Germans near the end of World War II when his plane went down over Holland in February 1945. He was freed in May 1945 but never talked about his time in the war.

Glenda researched online to see if she could find out about what he may have experienced and was able to connect with people who lived in the village where his plane went down. She and her sister have visited that village and met people who say they prayed for those men to survive and make it home and they did.

• Gary Barringer, veteran of the year

• Roger Ellerbee, chaplain of the year