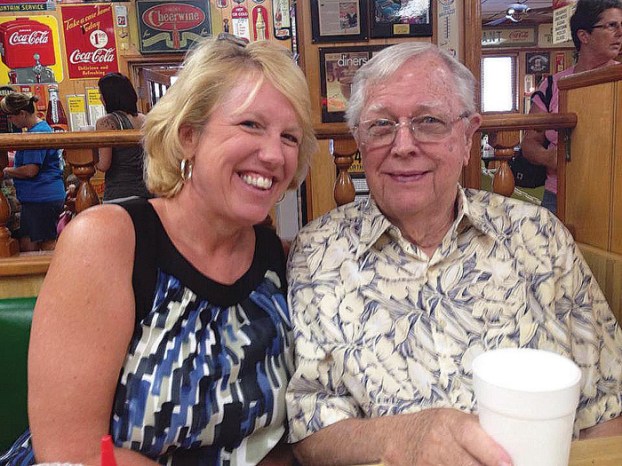 Dad and I often reward ourselves with trips to Gary's. Here we are in summer 2016.

My daddy and I planted daffodil bulbs Friday — a pretty slick trick since we now live two hours from each other.

Earlier this fall, Daddy gave me the daffodils that he finally dug up. He turned 90 this summer, and has reluctantly set aside his gardening gloves. This probably has something to do with my Mother insisting it be so, but it was mostly his choice. I think.

That didn’t stop him from telling me how to plant the daffodils in my Raleigh yard. Thanks to the magic of Face Time, he was right there with me.

“Is that the only tool you have?” he asked, when I held up a small trowel.

I thought I remembered one propped beside my husband’s basement workroom, and, when I walked around to the back yard, sure enough, there it was. In the mean time, I turned the phone around so he could see the back yard.

“Let me see the back of the house,” he said, so I panned across to show him the deck and laundry room — my home away from home.

We then “walked together” to the front yard. I showed him my across-the-street neighbor’s house (she happens to be Doug Kearney’s sister — small world), and then I showed him the front steps, which I’d recently cleaned and swept.

“How are you going to get that moss off the sidewalk?” he asked.

“With a power washer,” I said. I’d scrapped the front steps clean and was disinclined to do the same with the sidewalk. Luckily, a friend of my husband’s has one we can borrow. My daddy and I think a lot alike, I have to say. Even at 90, my dad is a lot more observant than I thought. I panned more quickly as I walked back to the front yard, shovel now in hand.

“Do you have gloves?” he asked.

“Dirt is not good for your hands,” he said, plainly.

OK, I said, and I went into the house to fetch a pair of cotton running gloves. They wash up quite well.

“OK, now take your shovel and put it in the ground, then wiggle it around a little, and take the dirt out,” Daddy explained. “You want the bulbs about six inches down and six inches apart from each other.”

That sounded easy enough. I told him I’d call back later and got to work.

With all of the bushes and ivy in the front yard — I’m pulling ivy every chance I get — I hit roots right away. Either that or rocks.

I texted my husband.

“This is the darndest thing,” I said. “I’m either hitting rocks or roots. Anywhere else I can go that I don’t have to kill myself to dig a hole?”

“Pick a spot!” he texted back. “EVERY SPOT I PICK IS LIKE THIS! THE STUPID GROUND HATES ME!”

(There were actually many more exclamation marks.)

“Have a little patience and just work with Mother Earth!” he texted back.

Clearly, he knows by now that patience is not one of my strong suits. Maybe he was being ironic.

I kept digging. After nine holes (not nearly as fun as golf), I gave up and switched locations, farther up the driveway. Nine more holes there. Kept hitting roots. I decided to go all the way to the mailbox. Maybe the ground would be friendlier up there.

Sure enough, there were fewer roots. It got a little easier. I tried to spade the earth like I’d seen Daddy do it a hundred times, smooth and easy. I found I stuck my tongue out just like he did when he was concentrating. I tried to get in a rhythm. I did not. Mostly I just sweated and dug.

I remember one summer Daddy had a back tooth pulled. It was not much of a big deal for him. By the afternoon, he was back in his huge garden, digging and spitting blood, which mingled with the red dirt.

(Mother vowed and declared Friday evening that he most certainly did not have a tooth pulled. I didn’t argue. But the memory is too vivid to have been a dream. That’s not an image you just forget.)

Luckily, I didn’t lose a tooth on my project. But I was so tired that I had to wait until Saturday morning, to sprinkle plant food in the holes, and cover up those precious bulbs, one by one.

Daddy and I celebrated our project’s completion on Monday at Gary’s Barbecue. I’ll Face Time him this spring, so we can ooh and ahh together over the blooms.

Angela Smith: Is church playin’ out?

What?? What did she just say? Hold up; Let me explain. This post is primarily to leaders in our churches.... read more