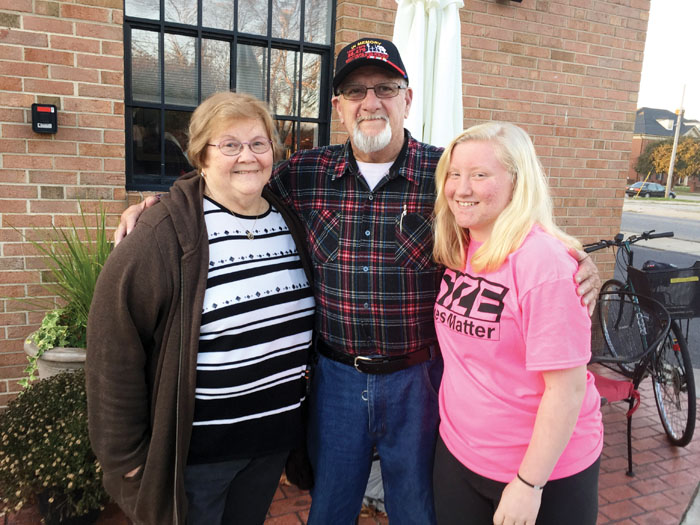 Here is Gary with his wife Brenda and granddaughter Destiny (all Barringers). Gary was awarded Veteran of the Year during Saturday during Veterans Day festivities. Photo by Andie Foley, for the Salisbury Post.

This is the amount of time Gary Barringer, of Rockwell, spent in active service between the army and National Guard. Numbers roll off his tongue, representing a knack for dates and timespans.

He recalls with ease the dates he spent on the repurposed U.S.S. Albemarle in Vietnam: December 1968 to April of 1970. In the next breath, he’s on to August 1970: the date he attended his first North Carolina Veterans of Foreign Wars meeting and was thrust into the role of quartermaster.

His time working as a brakeman conductor for Norfolk Southern and as National Sergeant-at-Arms share a common timespan: 22 years.

Gary, it seems, has done it all and at length — but there’s a new date for him to remember. On Saturday, he was recognized as Rowan County’s Veteran of the Year.

Alecia Judd, the commander for Veterans of Foreign War Post 9134 in Rockwell, was the voice behind his nomination.

“As post commander, I have called on Gary’s vast knowledge in which he has spent numerous hours to train me after becoming a new commander,” Judd said in her nomination letter. “He ensured that proper procedures would be carried down to my generation.”

“He’s for the veterans. He’s always been there pulling for them, rooting for them, being there,” said Brenda. “If there’s anything he could do for them to help them, … he was just there.”

For Gary, his decades-long involvement with veterans’ organizations stems from what he feels to be a vital community need. Veterans, he says, need more than advocates. They need the chances to talk with and listen to other men and women who have also served.

“There’s so much said that veterans won’t talk to anybody,” he said. “A veteran will talk to a veteran.”

Accordingly, Gary served in local and national capacities to increase membership in veterans’ organizations. He even attends Thelma’s Frontier Coffee Shop, a place known for its free coffee and conversation.

“Things like these coffee shops that they’ve opened, to me that is the most important thing that’s happened for veterans,” said Brenda. “They’ve been where some of these guys have been. Maybe not the same place, but they’ve been against things like that.”

At Post 9134, Gary’s mentorship has Judd just six members shy of her goal of 50.

“We try to build these posts up and get new members in,” Gary said. “If we as members now don’t do anything, the whole organization is going to fall apart.”

Judd, speaking in earnest after learning that Gary had been selected for Veteran of the Year, summed up her thoughts simply.

“He really deserves Veteran of the Century.”