Following through: Gerry Fitzpatrick closes in on pledge to make 100 quilts for veterans 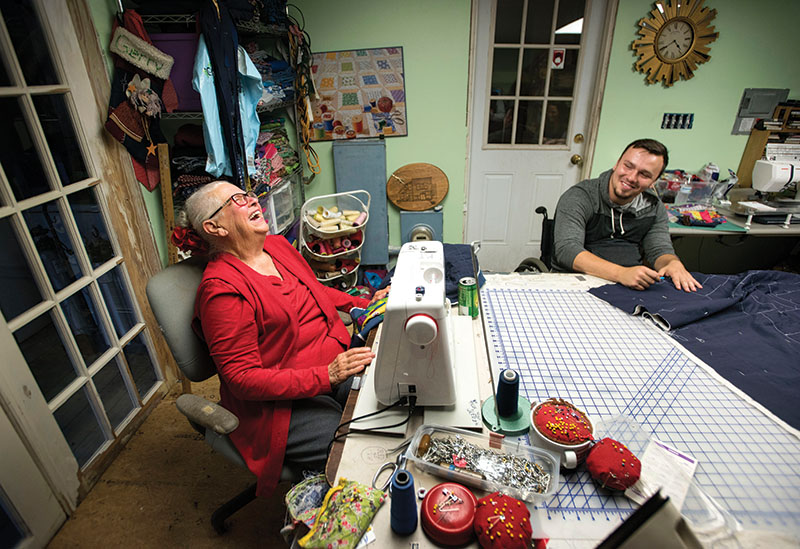 JON C. LAKEY / SALISBURY POST Gerry Fitzpatrick (left) is using her long-time sewing skills as a fundraiser and a outreach to veterans. After her great grandson Michael Socorro (right) had his wheelchair stolen from a parking lot at High Rock Lake, Fitzpatrick came up with the idea to make a quilt for every $30 donation to raise money to replace the stolen chair. The wheelchair quilts in turn will be dontated to a veterans.

ROCKWELL — When Geraldine “Gerry” Fitzpatrick makes a promise, she keeps it.

About a year ago, Gerry pledged to sew a quilt for every $30 that was donated toward buying her great-grandson Michael Socorro a new, custom wheelchair. And each quilt, the 89-year-old Fitzpatrick declared, would go to a military veteran.

The circumstances behind the 25-year-old Socorro’s needing a new wheelchair — his first one had been stolen — prompted an outpouring of support from the community.

In only a few months, a Go Fund Me page set up for him by an aunt had collected $3,000, which was enough for the New Motion TI-Lite model he now relies on.

Doing the math, Gerry realized she would have to sew 100 quilts, and she was not going to welch on a promise.

As of Thursday of this past week, Gerry lacked only 16 quilts from reaching her goal.

“There are going to be 100 veterans who get a quilt,” she says, seeing the finish line in sight.

The quilts she already has completed have been handed out, mostly to patients at the Hefner VA Medical Center.

“She’s like a celebrity now,” granddaughter Joanne Socorro (Michael’s mom) says of Gerry’s reception at the VA hospital. “This has been truly a blessing for me and Gram. They really, really love to see us come in.”

But Gerry is as likely to ride down a street or highway, see someone in a wheelchair and yell for Joanne to stop. She then exits the car, chases down the person and asks whether he or she is a veteran.

If so, they receive a quilt. “You don’t get a quilt unless you’re a veteran,” she says. “… I always have two quilts in the car.”

As she hands out her quilts, “I tell them a little joke or two,” she says.

Gerry has been making what are essentially wheelchair quilts. They’re not full-size because she doesn’t want them to be catching in the wheels continually, but they still measure a solid 36-by-45 inches.

Why give them to veterans? “We owe everything to the veterans,” Gerry says. “Without the veterans, we wouldn’t be able to be here.”

Needless to say, the sewing room at the back of Gerry’s house off Phaniel Church Road has for months been a busy place, crammed with fabric and the measuring, cutting and stitching activities of Gerry and others.

Michael Socorro, Joanne Socorro and Michael’s girlfriend, Becca Raywood, have become proficient in quilt-making skills themselves, learning from the perfectionist dictates of Gerry. Michael has a separate sewing machine he can operate with push buttons, taking the place of a pedal on the floor.

Michael was paralyzed from the chest down on June 9, 2015, when his motorcycle ran off N.C. 152 and hit a utility pole. He was only about a half-mile from home.

“He broke his whole body in half, basically,” Joanne says.

Michael was 23 at the time and a manager at the Food Lion store in Rockwell. He went through months of recovery, rehabilitation and physical therapy. He also received a specialized wheelchair customized to his legs and the way he sits and moves.

Back on Sept. 7, 2016, Michael had been fishing on High Rock Lake all day with his Uncle Bill and cousin Emile. The men did not bring the boat back to Tamarac Marina until late at night.

Michael rolled up to their truck to go home and pushed himself from the wheelchair into a passenger seat.

The wheelchair had started to roll backward, so his cousin secured it and placed it on the opposite side of the vehicle while all the fishing gear was loaded up. The men drove away and forgot the wheelchair.

They realized their oversight about 10 minutes down the road, turned around and headed back to the marina. But the wheelchair was gone. They searched the water by the boat ramp and everywhere else in the parking lot, day and night.

The family placed an advertisement in the newspaper, offering a $100 reward — no questions asked — for the return of the wheelchair. No one ever came forward. Meanwhile, Michael relied on a borrowed, standard wheelchair that was tough on his body.

Then came the idea for the Go Fund Me effort to finance a new wheelchair, followed by Gerry’s pledge to make quilts based on the contributions.

Call her old school, but Gerry thinks her family should not be the recipient of such kindness without giving something back in return.

“Back in her day,” Joanne says, “you don’t get something without giving something.”

Michael Socorro says he can’t believe the sacrifices Gerry and the rest of his family have made for him. “They’re annoying as hell, but …” Socorro says. You see the smile and recognize how appreciative he is..

If you haven’t figured it out by now, Gerry Fitzpatrick is a character. She had two husbands, both of whom died, and a boyfriend of 16 years who also passed away.

Family members have said Gerry’s coffin will have to be nailed shut to keep her inside.

Gerry acknowledges she usually has to have a project.

“I failed sewing in school — it didn’t go fast enough for me,” she says.

Though she can’t remember exactly how many years ago it was, Gerry says she made her first quilt at the Mayo Clinic in Minnesota during her six weeks of treatment for breast cancer.

“I can’t stand to go six minutes without doing something,” she says.

She traveled to a quilting store, bought an instructional book and materials and made her first quilt during her treatments.

Most of her fabric for these latest quilts came via a friend in Minnesota, where two of her daughters live. The friend telephoned while attending a yard sale, because a woman was selling material for 50 cents a yard. Gerry agreed to pay $300 for all the fabric.

Joanne Socorro and Gerry say some of the military veterans to whom they have given quilts have broken down in tears. Most of them immediately offer to pay Gerry for her gift.

“It’s more than making quilts,” Gerry says of what she is doing. “It’s so heartwarming.”

When her most recent visitors leave — people seem to come and go from the sewing room all the time — Gerry reminds them she has lived a good life and had a lot of fun along the way.

“Stay long enough, Sweetheart,” she adds, “and I ‘ll show you how to quilt.”