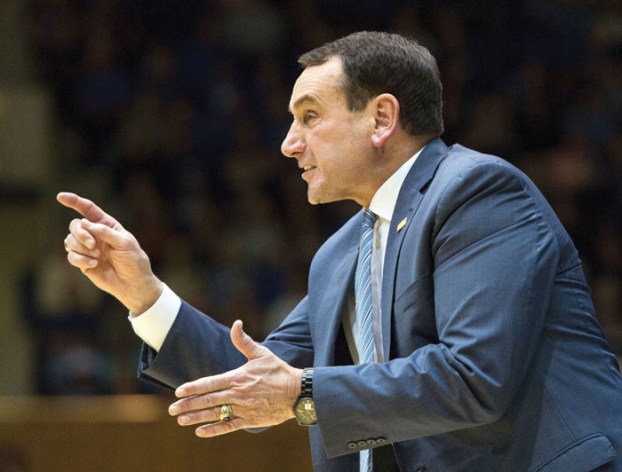 DURHAM (AP) — Make it another 1K for Coach K — with all of these coming at Duke.

After the game, the Duke players donned T-shirts with the “Coach 1K” logo that also adorned signs given to the fans at Cameron Indoor Stadium and former Duke star Shane Battier hugged his college coach during the postgame ceremony that marked the milestone.

Krzyzewski called it “a nice thing on the court to share” but declined to talk about the milestone with the media, preferring to keep the focus on the game.

“It’s pretty awesome to be a part of two pretty historic moments for Coach,” said Allen, a freshman on that Duke team three years ago. “This one being in Cameron, felt a lot more love for Coach and I think this one was the coolest just because of the fan support and being at home.”

Utah Valley, which pestered No. 5 Kentucky a night earlier, gave Duke about 10 minutes’ worth of trouble before the Blue Devils pulled away on the strength of arguably the nation’s best freshman class.

Each of Duke’s first 40 points was scored by a freshman, including every single one during the 27-8 run midway through the first half that gave the Blue Devils a comfortable lead and put Krzyzewski well on his way to the latest milestone of his Hall of Fame career.

Duke: The freshmen will be the story of the season — the Blue Devils even used five at once for the 3-minute stretch that sparked the game-breaking run — and now the focus is how they’ll handle their next game, the showdown with second-ranked Michigan State in Chicago.

Without question it will be the biggest stage so far for a Duke team that starts four freshmen — the first time the Blue Devils have done that since Johnny Dawkins and Mark Alarie were first-year players in 1982-83.

Bagley started his college career with consecutive 20-point games and double-doubles, after finishing with 25 points and 10 rebounds against Elon on Friday night. . Duval has 20 assists and one turnover in two games.

Duke had five freshmen on the court — Bagley, Carter, Trent, Jordan Goldwire and Alex O’Connell — after Allen picked up his second foul with 11:38 left in the first half. In that group’s 3 minutes together, they reeled off nine quick points and forced three consecutive turnovers.

Allen became the first non-freshman to score for Duke when his dunk with just under 3 minutes before halftime. That made it 42-31 and put the Blue Devils up by double figures for good.

Utah Valley assistant Chris Burgess was on the Duke teams that reached the Elite Eight in 1998 and the national title game a year later.

“And here’s to the next thousand wins at Duke!” — Battier, to Krzyzewski.

Duke: The Blue Devils face No. 2 Michigan State on Tuesday night in Chicago in the Champions Classic.