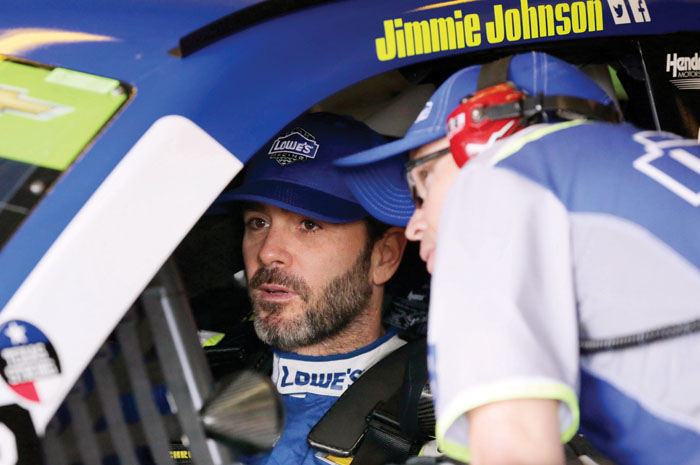 AP Photo/LM Otero ... Jimmie Johnson, left, talks to a crew member in the garage during a practice session for last week’s NASCAR Cup series race at Texas Motor Speedway. Johnson is looking to win this week in Arizona.

AVONDALE, Ariz. (AP) — It wasn’t supposed to be this difficult for seven-time champion Jimmie Johnson to chase a record-breaking eighth NASCAR title.

Yet here he is, with one race to go before next weekend’s championship finale, and Johnson needs to pull off the performance of the year to earn the right to defend his crown. There’s only one slot left in the final four, and five drivers will be chasing that berth Sunday at Phoenix Raceway.

A win by Johnson or the other four playoff drivers will earn them the right to race Martin Truex Jr., Kyle Busch and Kevin Harvick at Homestead-Miami Speedway for the championship.

Johnson is a four-time winner at Phoenix, but this season has been a struggle. Although he has won three races this year, they all came in the first third of the season. He is winless since Dover in June, and Johnson has just one top-five finish in the last 21 races.

“At the end of the day, chasing speed is really the culprit,” Johnson said Friday. “The start of the process is just trying to make our cars faster. And, at times, we’ve not made the best decisions and have made them very hard to drive. I think Texas was an example of that and also Kansas. We spun twice there. So, it’s just trying to make the cars faster.”

This strange position for the seven-time champion led to a question Friday about his future with crew chief Chad Knaus. The two have won all seven titles together, but Johnson admitted 2017 has been one of the most challenging seasons of his remarkable career.

Could that lead to changes at the end of the year for the No. 48 team?

“I started this with Chad and I want to finish it with him,” Johnson said. “Crew chiefs live in dog years versus drivers. I think he’s made that known that his time might expire before mine does, just because of the wear and tear of being a crew chief.”

On Sunday, the duo will be chasing Brad Keselowski, Ryan Blaney, Denny Hamlin, and Johnson’s own teammate, Chase Elliott.

The curious part of Johnson’s struggles is that Elliott has actually excelled during the playoffs and might have locked in a berth for the finale at Martinsville if he hadn’t been wrecked out of the lead by Hamlin in the waning laps.

While Johnson is chasing speed, Elliott has his eyes only on victory lane.

“Our task at hand is pretty simple, we have to win the race to move on next week, everybody in here knows that,” Elliott said. “It’s not the most ideal situation, but if you were able to pull it off, it would be a lot of momentum moving into next week.”

Busch won at Martinsville to earn his spot in the finale, Harvick won at Texas and Truex clinched his spot on points. Truex, the strongest driver all season and favorite to win the title, will race the final two weeks without team owner Barney Visser on hand.

The Furniture Row Racing owner suffered a heart attack last weekend and was recovering from bypass surgery in Colorado. The timing is heartbreaking for Visser, who has largely spent most of his own fortune on fielding a NASCAR team.  The car is fully sponsored next year and Visser will get some financial relief.

“It’s a chance of a lifetime to be in position to win the NASCAR Cup Series championship,” said Visser. “I hope to be in touch with Martin and Cole (Pearn, crew chief) leading up to Homestead and participate without too much excitement.”