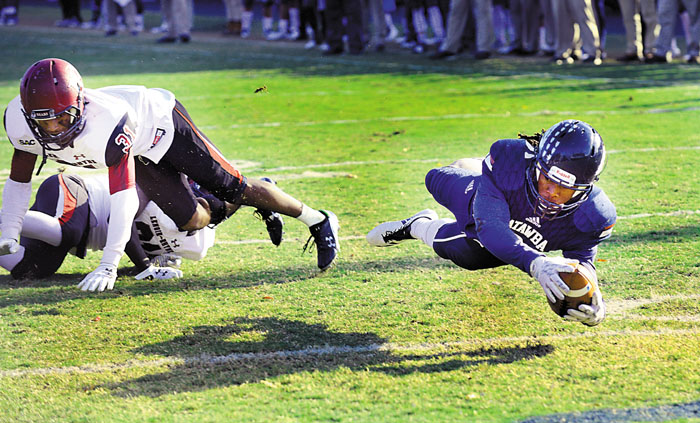 Wayne Hinshaw/for the Salisbury Post ... Catawba running back Kenyatta Greene, right, dives into the end zone for a touchdown as two Lenoir-Rhyne players missed the tackle, during Saturday’s game. The score put Catawba up 17-10 and the Indians went on to win, 24-20.

SALISBURY — The Catawba Indians overcame their own emotions and an inspired Lenoir-Rhyne team and punched their ticket for the Division II playoffs.

Catawba dominated the stat sheet on Saturday afternoon at Shuford Stadium, but the visiting Bears still had a chance to shock the region until Catawba’s defense made a stop with two minutes left. Catawba prevailed, 24-20, beating its ancient rival for the third straight time.

“Lenoir-Rhyne definitely came here with the intention of spoiling our party,” said Catawba senior quarterback Patrick O’Brien, who threw for 178 yards and handed off to backs Kenyatta Greene and Eamon Smart, who stampeded for a combined 235 on the ground. “L-R isn’t as big as a lot of the teams in our league, but those guys are tough. They were hard to block at times, but through it all, we stayed positive.”

Catawba head coach Curtis Walker was relieved. He wanted a special senior class to go out as winners on their home field. Catawba (9-2, 5-2 SAC) is almost a lock for a playoff berth (pairings and seeds will be announced today), but the Indians will likely hit the road in the first round. Seeds 5, 6 and 7 are on the road. Catawba was ranked sixth entering play on Saturday.

“We did some crazy stuff today,” Walker said, shaking his head. “All we talk about is not getting beat on a deep ball, and we got beat deep (for 60 yards) the second play of the game. We let them hang around and hang around until the very end. I wish we’d played better, but we did enough to win the ballgame.”

That early deep ball led to a Lenoir-Rhyne touchdown on a 1-yard dive by 1,000-yard rusher Nelson Brown. The Bears added Chase Allbaugh’s 39-yard field goal to put Catawba in a 10-0 hole — eight minutes into the contest.

The first sign of life from the Indians came on a sudden, 60-yard sprint up the middle by Greene with six minutes left in the first quarter. It appeared Greene would out-race the Bears to the end zone, but free safety Kyle Dugger made a last-ditch lunge that toppled Greene on the L-R 3-yard line. A holding penalty pushed Catawba back, but facing third-and-goal at the 8, O’Brien connected with Keyon West on a corner route for the TD  that lifted the Indians back in the game.

“My pre-snap read was they were covering Keyon with a safety one-on-one, and I was looking for Keyon all the way,” O’Brien said. “He came open and he made another great catch.”

Catawba tied it at the 9:10 mark of the second quarter when Lee Brackman nailed a 43-yard field goal. It was still 10-all at the break.

“We didn’t execute on a kickoff return and we gave them a touchdown, and when you give up a touchdown on special teams, you will usually lose the ballgame,” Walker said. “I’m just glad we were able to settle down.”

That huge play by Huff could’ve swung things L-R’s way, but Catawba responded. O’Brien marched the troops 75 yards on eight plays. Catawba caught a break when record-setting receiver Sam Mobley lost a fumble after a catch, but the ball skittered sideways to his teammate, West, who got on it. Smart and Greene did the rest on that drive, pounding behind an offensive line that was missing right guard Kerin Castillo. Kevin Norton, normally one of Catawba’s rotating centers, was at right guard. Greene got his second TD to finish what would prove to be the decisive drive with 5:09 left in the third quarter. The Indians led, 24-17.

“Our o-line was dinged up, but after we struggled adjusting to that early on, we settled in with our running game,” said Smart, a senior who rushed for 93 yards. “I think our emotions were just so high at the start that we didn’t play very well. In the second half, we calmed down and we relaxed.”

Cornerback T.J. Lowe-Foston made a leaping interception for the Indians, but Catawba couldn’t cash in. It was still 24-17 going to the fourth quarter.

Facing fourth-and-2 at its own 38 early in the final quarter, L-R lined up to go for it. The thinking was that the Bears were simply trying to draw Catawba offsides, but the Bears ran a play. Brown carried the ball off the right side and was quickly wrapped up in the mighty arms of Catawba’s All-America linebacker Kyle Kitchens. He was a yard shy of the first down.

“I was surprised they went for it there, but they really didn’t have anything to play for — except to beat us,” Kitchens said. “That was a stop we needed, and I’m glad I made it, but we had a lot of guys who made very big stops today.”

Kitchens’ tackle provided the Indians with a great opportunity at the L-R 39, and the Indians advanced to the L-R 25. On fourth-and-7 at the 25, Brackman would’ve been looking at a 42-yard field goal, but Catawba opted to go for the first down. O’Brien’s fourth-down pass to Mobley fell incomplete.

“Looking at all the options, I was comfortable with the decision to go,” Walker said. “We’ve got complete faith in our kicker, and he’d already made one from that distance. But our offense was clicking.  I had full  confidence we’d get that first down.”

Catawba was able to burn almost four minutes off the clock on its next possession because West, who has blossomed into a fierce player as a senior, dragged three tacklers for a first down he had no busy getting.

When the Bears got the ball for the final time with 4:04 remaining on their 29, it was crunch time. Brown hammered the ball forward three straight times for solid gains. The Bears had third-and-1 at midfield, and most of the 2,088 fans in attendance were afraid to watch anymore.

But that’s when Catawba freshman Cameron Davis, a backup defensive end, made the play of his life. It was supposed to be a run to the flank by the speedy Huff, but Davis was smashing into Huff as soon as he got the ball. The loss was 3 yards. On fourth-and-4, the Bears had to try the air, and a pass by Jarrod Kellar, the coach’s son, eluded receiver Jaquay Mitchell, who had gotten open in the middle of the field.

Catawba ran out the clock from there.

“All of our seniors, I can’t thank them enough for this day and for what they’ve meant to this program,” Walker said. “I can’t say enough good things about them.”

NOTES: Mobley had four catches for 73 yards. His 1,046 receiving yards are a school record for a single season. Catawba assistant coach Corey Ready had 1,043 in 2003. … Catawba’s five new Hall of Famers were recognized at halftime.  … Kitchens added two more sacks to his school-record tally. … Cornerback Cris Page had an acrobatic breakup in the end zone and senior linebacker Trey Evans had a hit on the quarterback that forced L-R to settle for the field goal that made it 24-20. … L-R coach Mike Kellar said the Bears made strides this year, despite a disappointing record (3-7,2-5). “I gotta be the most optimistic 3-7 coach in the country,” Kellar said. “I feel really good about the direction that we’re headed.”