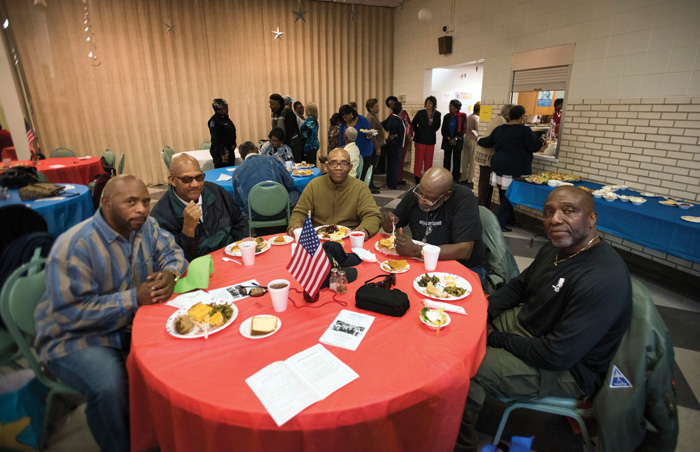 Al Heggins, who was elected to a seat on the Salisbury City Council in Tuesday’s election, was the guest speaker.

The luncheon was first held eight years ago when Tangy H. Roseborough brought the idea to the late Rev. Clary L. Phelps.

“I said, ‘We should do something for veterans,’” Roseborough said. “He came back soon after saying, ‘Let’s have a banquet for veterans.’”

This year is the first time Phelps was not there. He died in August.

The Rev. Ruby Steele chose to continue the luncheon, saying the program expresses the church’s “thankfulness for the veterans’ service and for standing in harm’s way for our freedom.”

Steele said the program will continue because “we have an obligation to remember our veterans.”

The program opened with music led by the church’s music ministry and everyone in attendance joining in singing “Life Every Voice and Sing.”

Before lunch was served, the Rev. Sherry Ford read Psalm 121 and Deacon John Ford offered a blessing and prayer.

The Senior Care Bible Study class offered a baked and fried turkey lunch with yams, collard greens, ham, corn pudding, and rolls. For dessert, a variety of cakes and pies were provided by the church.

Veterans mingled as they enjoyed their meal. Many expressed appreciation for the luncheon.

After the meal, I. Jerome Heggins introduced his wife, Al, who is a retired captain in the Army. Before bringing her to the stage, he shared memories of the Marines as well as jokes about the Marine Corps-Army rivalry in his household.

“She steps up now as she stepped up then because we still need her service,” Jerome Heggins said.

Al Heggins spoke about her Army experience and her appreciation for those veterans who came before her.

“I felt proud to join the Army because I had a legacy to fall back on,” said Heggins. “Thank you for letting me stand on your shoulders to accomplish what we have.”

She said her military background will help her serve the city.

“I answered the call to duty before, so I understand the serious commitment and serious workload of being a public servant,” she said.

Heggins concluded by asking veterans to be active in the community.

“We still need your service, wisdom and fighter spirit in our community as we move forward writing the next chapter of our city’s story,” she said.

In addition to lunch, the program included a raffle for door prizes donated by members of the community. Pies, gift cards, cakes and gift baskets were all given away.