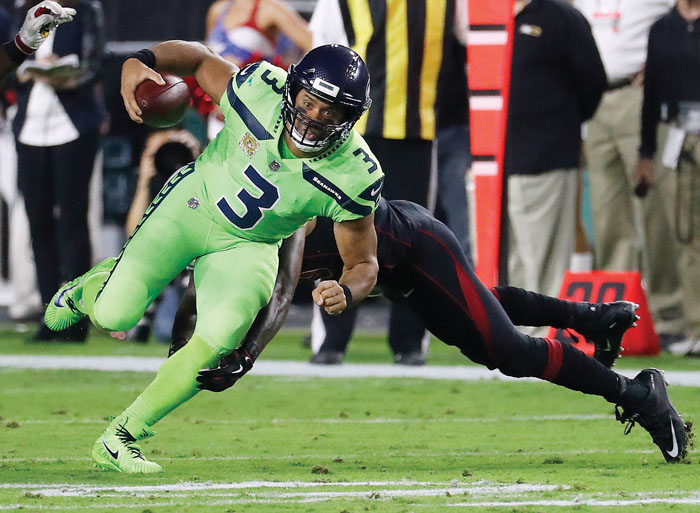 GLENDALE, Ariz. (AP) — Russell Wilson threw two touchdown passes to Jimmy Graham and the Seattle Seahawks added to their history of success in Arizona with a 22-16 victory over the Cardinals on Thursday night.

The Seahawks (6-3) limited Adrian Peterson to 29 yards in 21 carries in a game marred by a host of injuries and penalties, most of them against Seattle, to improve to 4-0-1 in Arizona in Bruce Arians’ five seasons as coach of the Cardinals (4-5).

The only time the Seahawks haven’t beaten Arians’ team in Arizona was in last season’s 6-6 tie.

Seattle’s Kam Chancellor forced a fumble by Peterson on Arizona’s first offensive play and later tackled him in the end zone for a safety.

At least seven players left the game with injuries, including Seattle cornerback Richard Sherman, who limped off the field in the third quarter with a heel injury. He had missed practice all week with an Achilles tendon problem.

Wilson, sacked a season-high five times, completed 22 of 32 passes for 238 yards. Arizona’s Drew Stanton, in his second start since Carson Palmer went down with a broken arm, completed 24 of 47 for 273 yards and a touchdown. Larry Fitzgerald caught 10 passes for 113 yards for the Cardinals, topping 15,000 yards receiving for his career in the process.

The night’s biggest play came early in the fourth quarter. With his team leading 15-10, Wilson scrambled and spun his way out of serious trouble repeatedly before throwing from his heels to Doug Baldwin. Antoine Bethea fell down trying to knock the pass away and Baldwin raced downfield on a 54-yard play to the Arizona 2-yard line.

Kerwynn Williams scored on a one-yard run with 20 seconds to play for the Cardinals and Seattle recovered the onside kick try to seal the win.

Arizona left tackle D.J. Humphries and safety Tyvon Branch both left with right knee injuries early in the game. Humphries injured the same knee in the season opener. Branch was the Cardinals’ leading tackler through eight games with 68.

Seahawks defensive tackle Jarran Reed left in the first quarter with a hamstring injury. And Seattle left tackle Duane Brown, in his second game since being acquired in a trade from Houston, went down with an ankle injury in the second quarter.

The Seahawks already were without safety Earl Thomas, who sat out the game with a hamstring injury.

Seattle entered the game as the most penalized team in the league with 82, nine more than its nearest competitor, the New York Jets and it looks like their lead in that category for another week is assured.

With their 12 penalties (for 108 yards) on Thursday, the Seahawks have 94 in nine games.

WITH NO ZEKE, IS ARROW POINTING UP FOR DALLAS?

The arrow was pointing up for the Cowboys, sideways or down for the Falcons.

Then a federal court on Thursday upheld the six-game league suspension for Ezekiel Elliott, a damaging blow to Dallas.

When they meet Sunday in a critical NFC match, the winner will be in decent position for a run toward the playoffs, hardly what either 2016 conference power projected.

The loser, particularly if it is Dallas with NFC East leader Philadelphia already 2½ games in front and Elliott presumably gone for much of the remainder of the schedule, will have used up significant margin for error.

“We know as a team what we’re capable of,” safety Ricardo Allen said of his 4-4 Falcons . “Just go out there and do our job. Just give a little more, take it to another level.

“We have another whole half of the season. Get it rolling. Get the small things right.”

Dallas (5-3) has done a lot of big things right after a 2-3 start. Somehow, the Cowboys managed through all the distractions from their star running back’s on-again, off-again suspension, and they handled Kansas City quite well last Sunday.

Now comes a huge in-conference test at the new Mercedes-Benz Stadium, where Atlanta is only 1-2, but plays four of its next five games.

“We’ve just got to keep on pushing,” says receiver Dez Bryant, who is bothered by knee and ankle woes. “We know exactly who we are. We’re going to show everybody. This is a real team that sticks together and fights for one another. We’ve been through a lot of adversity, and we’re just showing you how to get out of it. That’s what we’re going to do. We’re going to keep on fighting and see where it takes us.”

The action began Thursday night with Seattle’s 22-16 victory in Arizona.

The Seahawks (6-3) limited Adrian Peterson to 29 yards in 21 carries in a game marred by a host of injuries and penalties, most of them against Seattle, to improve to 4-0-1 in Arizona in Bruce Arians’ five seasons as coach of the Cardinals (4-5).

The Saints are one of the league’s main surprises. We all expect Drew Brees to load up on passing yards and touchdowns, but New Orleans’ ground game has been formidable with Mark Ingram and rookie Alvin Kamara. As for the defense, it’s been just as responsible for a six-game win streak.

“It’s just great to see young players bring the Saints back up, because a lot of people just wrote the Saints off and said that we were a bad team and everything,” says first-round cornerback Marshon Lattimore, a strong contender for Defensive Rookie of the Year.

Buffalo hasn’t won at home against New Orleans since 1983. But the Bills are 4-0 at home this season; only the league-leading Eagles also are spotless in their own stadium.

Up-and-down Carolina comes off a key division victory against Atlanta and now faces Miami’s abysmal offense. All the Panthers have is the NFL’s top-rated defense.

Miami is averaging a league-low 14.5 points per game, which must make head coach (and offensive guru) Adam Gase cringe.

The Panthers seem to be getting first-round pick RB Christian McCaffrey more involved in the offense.

A matchup the Steelers love — they are 22-6 and have won four straight — and tend to get off to strong starts without the ball. Pittsburgh’s defense hasn’t allowed a TD on an opening possession in 25 games, the longest active streak in the NFL.

Expecting Indy’s defense to handle RB Le’Veon Bell and WR Antonio Brown might be far too much. Plus, there’s turmoil on the Colts after Vontae Davis publicly complained about sitting out with what he says is a balky groin, but what the team called a coach’s decision. The veteran cornerback was released Thursday.

An unquestionable lift for the Vikings came this week with Teddy Bridgewater activated. He’ll serve as backup to Case Keenum, but his return from a devastating knee injury in training camp 2016 is a huge plus.

“He hasn’t had training camp. He hasn’t done anything,” coach Mike Zimmer said of the prospect of Bridgewater seeing any action. “We’re just trying to get him to where everybody feels comfortable with him.”

Minnesota is comfy atop the NFC North with a two-game lead and showing lots of balance on offense and defense during a four-game win string.

Washington comes off a comeback victory at Seattle made more impressive by the wave of injuries it has fought through. Its defense has looked formidable, led by LBs Zack Brown and Ryan Kerrigan.

This might look like a mismatch with the Patriots on a four-game winning streak and the Broncos in a four-game slide.

Beware of that: While New England is seeking a 12th consecutive regular-season road win, which would tie its own AFC record, Bill Belichick is 8-10 against Denver. Tom Brady is 3-7.

“I think they’ve had good teams,” Brady says. “Obviously, you play on the road, it’s tough communication-wise, but when you play good teams I think the margin of error is even more slim, and this team has always had a good football team.

“A lot of the games have been close. … You can’t go out there and make a bunch of mistakes and expect to win.”

The Patriots will practice in Colorado Springs next week before taking on Oakland in Mexico City.

Denver must protect the ball better. It’s minus-12 in turnovers with 19 giveaways and seven takeaways.

WOW! The Jaguars won a game at EverBank Field, beating Cincinnati. They were 1-6 there last season.

This is no gimme for the AFC South co-leaders. The Chargers have won six straight in this series, scoring 30 or more points in five of those and outscoring the Jaguars by a combined 116 points.

Jaguars rookie RB Leonard Fournette can become the first player in NFL history to score a TD in the first seven games of a career.

Former Jaguars coach and current Chargers defensive coordinator Gus Bradley returns to Jacksonville 11 months after getting fired to end one of the worst coaching tenures in NFL history. Bradley went 14-48 with the Jags.

Cincinnati ranks last in overall offense, so it’s lucky that star wide receiver A.J. Green was not suspended for his fight with Jacksonville CB Jalen Ramsey last week. The Bengals best hope probably is getting an efficient pass rush led by Geno Atkins.

These are the kind of games in which the Titans tend to stumble while in the playoff chase. But they have won three straight and have a dynamic rushing attack with DeMarco Murray, Derrick Henry and quarterback Marcus Mariota.

Titans S Kevin Byard has five interceptions in his past two games, tying him for the most in consecutive games since 1970. Byard leads the NFL with six picks and Andy Dalton has thrown eight.

The Rams could ravage Tom Savage in this matchup as LA returns home. The previous time the Rams played at the Coliseum was Oct. 8.

Houston was inept on offense for most of last week’s loss to Indianapolis as it needed to revamp much of the offense to suit the more stationary, less imaginative game of Savage with Deshaun Watson gone for the season (knee).

This is only the third time these franchises have met, with the Rams up 2-1.

Journeyman QB Ryan Fitzpatrick had one very good season and one horrendous year with the Jets. He’ll start against his former team — Fitz also has played for the Rams, Bengals, Bills, Titans and Texans — and face New York’s current journeyman QB, Josh McCown.

McCown is having a strong season as the entrenched starter, though, and leads the AFC in completion rate at 70.4 percent. Fitz goes for Jameis Winston, who will miss a start for the first time after 40 games as a pro.

While Minnesota appears ready to march off with the NFC North, these also-rans continue the NFL’s longest rivalry.

Will Packers coach Mike McCarthy loosen the reins a bit on Brett Hundley, who looked befuddled and frustrated last week standing in for the injured Aaron Rodgers (collarbone)? Maybe Hundley can be comfortable at Soldier Field, where the Packers have won seven in a row.

Give Chicago credit for playing hard as the roster is rebuilt. Like Hundley, second overall draft pick Mitchell Trubisky has been shackled in the passing game by his coaches; the Bears have the NFL’s lowest-ranked aerial offense.

Only four franchises have never made a Super Bowl, and these are two of them; the others are Jacksonville and Houston.

Not much to recommend here, although the Lions looked solid last week against undermanned Green Bay. Now, they get under-talented Cleveland in a lopsided series the Lions lead 18-5.

Oh, for the days of Joe Montana vs. Lawrence Taylor, Big Blue against the 49ers Dynasty.

This is the first time since 1984 these teams have played this late in the season with only one combined win.