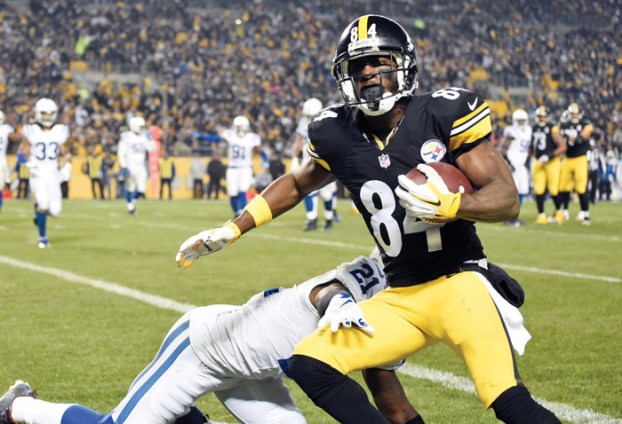 Steelers try to stay on task as schedule suddenly opens up

PITTSBURGH (AP) — The Colts in Indianapolis. Then the Titans at home on Thursday night.

That’s as much of his team’s schedule that Pittsburgh Steelers linebacker Ryan Shazier has allowed himself to memorize.

No looking down the road. Shazier stopped playing the “if we do this, then we do that” thing a while ago. Call it the residue of too many Sundays stumbling when the Steelers expected to sprint, a lesson the AFC North leaders are relentlessly reminding themselves of heading into a second half that doesn’t look nearly as daunting in November as it did in August.

“Honestly I think everybody’s focused right now on winning the games that we have,” Shazier said Thursday. “They see that if we overlook stuff, we let it slip away.”

Pittsburgh (6-2) insists it has grown up enough to avoid the traps that have popped up in recent years. The Steelers should get plenty of chances to prove it over the next eight weeks as they prepare to face just two teams currently with winning records and a steady stream of backup quarterbacks starting on Sunday against Jacoby Brissett and the Colts (3-6).

Brissett has played in all of 10 NFL games. Brett Hundley, who comes to Heinz Field on the last Sunday in November with the Green Bay Packers, has started just two.

Who knows who’s going to be under center for Houston on Christmas Day, though it won’t be rookie DeShaun Watson, out for the season with a knee injury.

The Steelers figure to be favored in seven of their final eight, putting them in prime position to claim home-field advantage in the AFC playoffs if they stay healthy and on task.

“I’ve always felt like I’ve been in the driver’s seat,” coach Mike Tomlin said. “That’s just my mentality even when I’m in the backseat.”

Which Pittsburgh is decidedly not.

Yet the Steelers are taking pains to not get ahead of themselves. Their two losses this season came against teams quarterbacked by Mike Glennon and Blake Bortles, reminders of what can happen if they lose focus.

“In the NFL, every week is hard,” defensive coordinator Keith Butler said. “Ain’t no patsies and we got to treat it that way. We’ve got to approach it that way and I think our guys, hopefully we will.”

Brissett is the sixth starting quarterback Indianapolis will send out to face the Steelers in the past six meetings. between the two. He’s getting comfortable in his new gig with the Colts, throwing for 308 yards and two touchdowns in a victory over the Texans last week. Still, the resume doesn’t exactly compare with the man he’s replacing: Andrew Luck.

That can put Butler in a tight spot. Brissett is still learning on the job. Figuring out what he can’t do — and then trying to exploit it — can be difficult compared to players such as Luck who have years of experience and a lengthy dossier on strengths and weaknesses.

“It’s tough to point out (his specific) talents, but you know they’ve got to run the scheme of their team,” cornerback Artie Burns said. “They still got to run the plays all the team runs. We just got to adjust to the person.”

Something the Steelers used to do as well as any team in the league. There was a stretch where they were nearly unbeatable against young quarterbacks.

Things have evened out in recent years.

So the Steelers insist they’re honing in on Brissett and no one else, even with Mariota and the intriguing if uneven Titans looming next Thursday.

While first-year defensive back Mike Hilton is doing his best to adopt the “week to week” approach preached relentlessly by the veterans, some games do stick out on the schedule.

The former Mississippi cornerback used to memorize when the Rebels would play Alabama and Mississippi State the second the schedule came out.

Though he doesn’t have Pittsburgh’s final eight games down pat, he’s well aware of when Tom Brady and the Super Bowl champion Patriots visit Heinz Field, a game that could — emphasis on could — determine home-field advantage in the AFC.

“I do: December 17th,” Hilton said with a laugh. “That’s a factor right there. I’m looking forward to that game. I’m not overlooking anybody, but I’m excited about that game.”

NOTES: S Mike Mitchell (Achilles) was limited on Thursday. If he can’t go, J.J. Wilcox will start in his place. … LB James Harrison (back) did not practice for a second straight day.