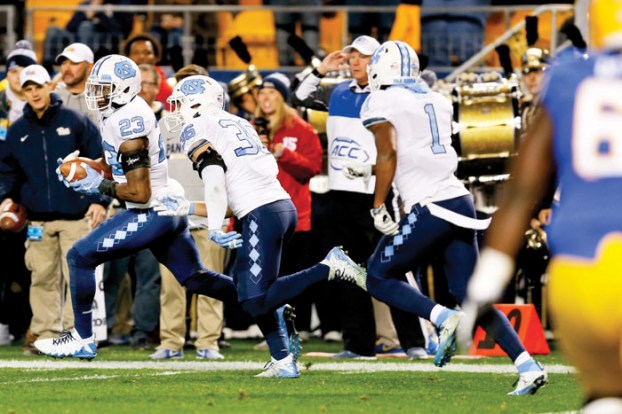 AP Photo/Keith Srakocic North Carolina linebacker Cayson Collins (23) runs with the ball ahead of teammates after recovering a fumble near the goal line by Pittsburgh wide receiver Quadree Henderson during the second quarter of Thursday night’s in Pittsburgh. The Tar Heels won, 34-31.

PITTSBURGH (AP) — Anthony Ratliff-Williams returned the opening kickoff for a touchdown, threw for another on a trick play and hauled in the eventual go-ahead score midway through the fourth quarter to lift North Carolina to a 34-31 over Pittsburgh on Thursday night.

Ratliff-Williams accounted for 230 all-purpose yards for the Tar Heels (2-8, 1-6 Atlantic Coast Conference), who ended a six-game losing streak by rallying repeatedly against the Panthers. Nathan Elliott completed 20 of 31 passes for 235 yards and two scores in his first start for North Carolina, which beat the Panthers for the fifth straight time thanks to Ratliff-Williams’ playmaking.

Darrin Hall ran for 121 yards and four touchdowns for Pitt (4-6, 2-4), but the Panthers saw their modest two-game winning streak come to an end and now face an uphill battle if they want to lock down a bowl berth for a 10th consecutive year. Pitt finishes the regular season against No. 17 Virginia Tech and No. 7 Miami.

North Carolina has struggled this season thanks in large part to an avalanche of injuries, including one to freshman quarterback Chazz Surratt last month against the Hurricanes that forced Elliott to get extensive playing time.

Elliott more than held his own against the Panthers, though it was Ratliff-Williams who did the majority of the damage. He took the opening kick and broke through several arm tackles while racing down the sideline for a 98-yard touchdown to give the Tar Heels the lead just 16 seconds in. He floated a 35-yard score to Josh Cabrera in the second quarter then hauled home on the winning score on a 3-yard flip from Elliott with 6:18 to go.

The Panthers responded repeatedly behind Hall, whose four touchdowns were the most by a Pitt player since James Conner scored four times against the Tar Heels in 2014. The Panthers lost that afternoon and fell again when quarterback Ben DiNucci couldn’t get Pitt past midfield on the possession after Ratliff-Williams’ touchdown grab.

Pitt punted with 2:54 to go and three timeouts but never got the ball back.

UNC: Elliott likely deserves another look. The sophomore needs work as a passer but his mobility kept Pitt’s improved pass rush in check for long stretches. He was at his best late while leading the Tar Heels on the late drive that put them ahead to stay.

Pitt: The Panthers are going to need something miraculous to keep their bowl streak alive. Virginia Tech and Miami will both have something significant to play for and Pitt will need to win both if it wants to extend its’ season beyond the day after Thanksgiving.

Prep Football: Salisbury at home in first round, North and West travel