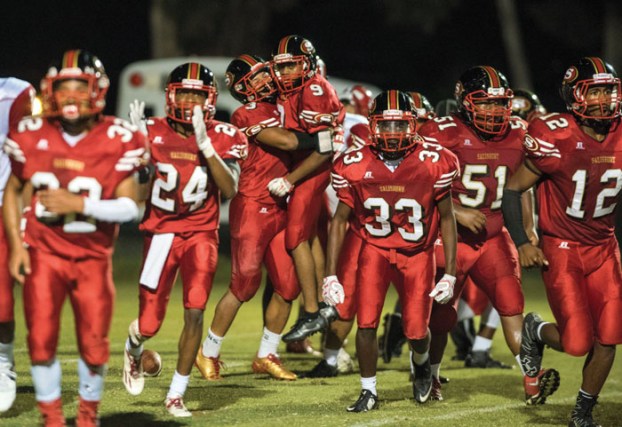 Prep Football: Salisbury at home in first round, North and West travel

North Rowan coach Ben Hampton had the right idea this week when he said it was time to stop growling about the playoff structure and start playing.

But first the last growls about the latest attempt to make the playoffs as fair and sensible as possible.

Sensible? The folks in Stanly County are paying for a lot of gas. Albemarle is riding to Pamlico County, four hours by car and longer by bus. South Stanly is topping Albemarle by making a journey to Murphy. Murphy is too far away from Norwood to even calculate.

The extreme cases as far as fairness are provided by South Caldwell, over in Hudson, and Heide Trask, a 2A school in Rocky Point, a town about 20 miles north of Wilmington.

South Caldwell went 1-10 and is in the 4A state playoffs. Actually, South Caldwell is already in the second round, It has a bye tonight.

The Trask Titans went 8-3, yes, 8-3,  and are sitting home tonight, watching TV or whatever.

South Caldwell’s situation is the product of being one of the two 4A teams in a 3A/4A split league. South Caldwell beat McDowell County, the other 4A team in the conference, so it’s seeded as a legitimate conference champ. That’s an obvious flaw in the NCHSAA system, but there are no easy alternatives. With the latest realignment, which reduced the number of 1As and 4As and increased the number of 2As and 3As, there aren’t any 4A schools in that area we broadly refer to as “the mountains,” with the exception of McDowell. South Caldwell, second among the 4A schools as far as western-most longitude, is located in the foothills.

The 4A school that is the third western-most in the state these days?  That would be West Mecklenburg. Seriously.

I’m not sure what can be done with isolated schools such as South Caldwell, but it’s easy to fuss about Trask’s situation.

The NCHSAA has tried hard to find a way to make strength of schedule matter.  The thinking is that if the only thing that counts as far as making the playoffs is won/lost record, then schools are encouraged to schedule cupcakes outside the conference. This season the NCHSAA, via MaxPreps rankings, has made strength of schedule matter a great deal, maybe too much. Now it’s probably more about who you played than who you actually beat.

It’s the NCHSAA that decides who the members of a conference are, so Trask, which finished in third place, played seven league games in the Coastal 8 Conference that it had no choice but to play and it won five of them. But Trask’s strength of schedule wasn’t up to snuff  because the bottom half of its 1A/2A split league was so weak.  Every time Trask smacked around a shaky opponent  —an opponent that the NCHSAA placed in its league —  its strength of schedule was diminished.

I have no clue how good Trask is, but in an era when so many teams make the playoffs, it seems silly that an 8-3 team isn’t a participant. Enough said.

The picks were 6-1 last week. The miss was a tremendously bad pick on Statesville-West Rowan. For the season, the record is 54-12. The record probably will not be good tonight. There are a lot of 8 vs. 9 games, a lot of games between teams with similar records and rankings.

That’s a lot of thirds, but a playoff win by any of those three tonight would make up for a lot of stuff that went wrong. Salisbury is a slight favorite. North’s game is a tossup. West is an underdog. In recent seasons, North and West have been good playoff teams. A.L. Brown almost always wins in the first round and is favored tonight. Davie, despite a 5-6 record, is a very slight underdog at Porter Ridge.

Red Springs is  considered the strongest of the six schools in Robeson County. This is an old-school team, three backs and a lot of smash-mouth running behind a physical offensive line. All that running sets up a decent passing game off play-action. Red Springs is a young team, with sophomore QB Denym McKeithan (he’s related to former Salisbury lineman Parker McKeithan) calling the shots. Sophomore Lee Mclean is the workhorse with 1,514 rushing yards and 14 TDs. The best player for Red Springs is 6-1, 240-pound fullback/linebacker Jerome Bass. The tough senior has made 140 tackles and has forced five fumbles.

For Salisbury, Griffin Myers has thrown for 1,391 yards and 19 TDs. Trell Baker has nine TDs. One of Salisbury’s best defenders, linebacker Jabril Norman, is questionable. He was hurt last week. The Hornets haven’t lost a home game.

North Rowan is led by running back Jaleel Webster, who has rushed for 1,416 yards and scored 17 TDs. Willis Mitchell  has thrown for 1,719 yards and 18 TDs. Receiver Quintous Smith Jr. has eight TDs. North’s defensive line is good. Matthew Hoosier has 23 tackles for loss. Darren Williams has nine sacks. Linebacker Tyzai Lyles is the leading tackler.

Polk County is an interesting team. Bruce Ollis returned as head coach this season after spending three years in South Carolina. Last year’s head coach, Jamie Thompson, has returned to being Ollis’ defensive coordinator. The team’s best athlete is Dillon Overholt (6-3, 190), who was playing quarterback until two weeks ago. That’s when he was moved to receiver. He’s also a starting safety. Junior Elijah Sutton has rushed for 1,200 yards. Defensive end Bryson Seay has nine of his team’s 21 sacks. Linebackers Austin Wilson and Braden Miller have 100-plus tackles.  Polk County was mostly a running team until Overholt switched positions, but new QB Avery Edwards will try to throw it to Overholt some. Offensive tackle Luke Sellers (6-3, 290) pancakes people. Quite a few Polk County players will go both ways.

Huss has athletes. Sophomore QB Zo Wallace puts the ball in the air about 16 times per game, but senior back Dallas Danner (1,058 rushing yards) shoulders most of the offensive load for the Huskies. West also has to account on every snap for senior Crawford Chandler, who might line up anywhere. He can throw, he can catch, and he averages 16.5 yards per carry. The Huskies have 23 sacks. That’s scary because as good a passer as Stolsworth is, he’s not elusive. Juniors linebacker Prince Bemah and Marcus Mauney are large and fast and both have eight sacks. Dondre Burris (5-10, 240) is a monster defensive lineman.

Davie will be looking to recapture the magic of its stunning win against Porter Ridge in the fourth round in 2010, back when current Salisbury High assistant Carson Herndon was the quarterback for the War Eagles.

A lot of people are picking Davie in this game, believing the War Eagles have been hardened by a schedule that included A.L. Brown, North Davidson and Page, as well as strong league foes Glenn and West Forsyth. That’s possible, but Porter Ridge has also played a fine schedule. It’s four losses were to very stout teams and three were on the road.

Quarterback Grayson McCall, a junior, has thrown for 1,281 yards, but Porter Ridge is mostly a running team. The Pirates have two backs at the 1,000-yard plateau in Malcolm Hines and Jaylon Coleman. That pair has combined for 22 rushing TDs. Isaiah Morgan, a 6-5, 260-pound lineman, has 11 sacks and leads the PR defense.

Davie’s running game has perked up lately behind sophomore Josh Robinson, but if the War Eagles are going to win they’re probably going to have to do it through the air with QB Josh Hall and receivers Matt Wilson and (record-setting) Cooper Wall. Linebacker Cody Hendrix tackles everyone in sight and leads a defense that has been hindered by injuries.

It’s hard to believe it’s been eight years since the Wonders outscored the Erwin Warriors, 45-27, in a wild second-round game in 2009.

It doesn’t have any bearing on tonight’s game, but it’s interesting that many people seem to believe Erwin High is haunted. The school was built on land that once was a cemetery.

Erwin is a spread team, but its offense is a 50/50 split between running and passing. QB Kendrick Weaver was a receiver when the season started, but he’s completing 64 percent of his passes and he’s run for eight TDs. Weaver had an amazing outing against West Henderson — 28-for-35 for 364 passing yards. Isaiah Poore is the backbone of the running game with 936 rushing yards.

Erwin started 0-4 with losses to powerhouse small schools Mitchell and Mountain Heritage, followed by losses to A.C. Reynolds and Asheville. After that, they started scoring 45 points per game and winning every week. They’ve won six straight.

A.L. Brown QB Jordan Medley has thrown for 1,884 yards while rushing for 585, and the Wonders boast a host of fast playmakers on offense and defense. Their defensive line should be able to take the run away from Erwin.

The Wonders shouldn’t have much trouble scoring. They’ll prevail in a shootout.