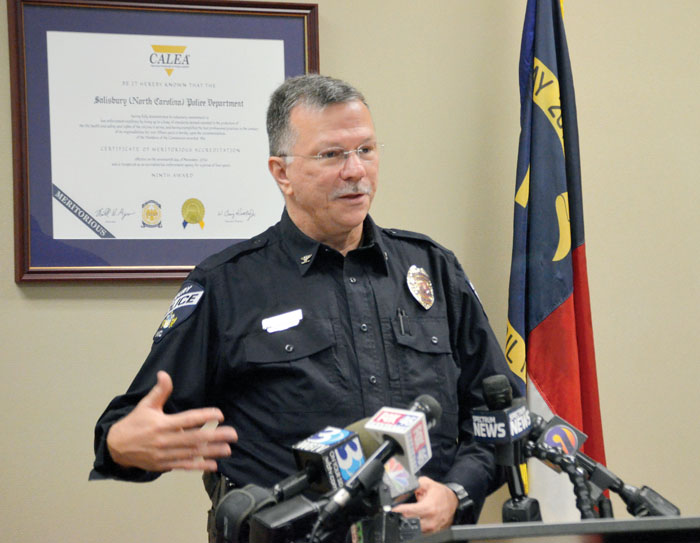 Salisbury Police Chief Jerry Stokes recounts during a press conference the events that led up to an officer-involved shooting subsequent to a bank robbery at Wells Fargo. Police say Paul Jones III, 25, robbed the Jake Alexander Boulevard branch, shot a customer inside, carjacked a man and shot him outside the bank and then shot at police. Officers shot and killed Jones. Shavonne Walker/Salisbury Post

SALISBURY — Salisbury Police Chief Jerry Stokes said no motive has been determined at this time following a bank robbery and subsequent shooting of the lone suspect by police.

Stokes recounted the incidents that led up to the shooting of suspect Paul Jones III during a Friday afternoon press conference.

Jones, 25, who most recently had been living in Salisbury, but had a previous address of Pinyan Pine Lane in Charlotte, went into the Wells Fargo at West Jake Alexander Boulevard around 5 p.m.on Nov. 9.

“In my initial review of the information we have at this point, I am comfortable saying that all officers, including those who fired their weapons, acted with the utmost bravery and valor. They clearly saved other people’s lives yesterday. We don’t know what led Mr. Jones to commit these evil acts and we don’t know what else he could have done had the officers not been able to locate him fleeing the area,” Stokes said.

Police received information about an armed robbery at the bank at 5:04 p.m. and while en route, learned someone was shot inside the bank. Stokes said Jose Santiago, 61, of Salisbury, was shot in the face and remains in critical condition at Wake Forest Baptist Medical Center in Winston-Salem.

He added that it was reported that shots were fired at Brenner Avenue during a carjacking where Larry Darnell Dalton Jr., 45, was thrown from his vehicle and shot in the head and arm. Dalton remains in stable condition, also at Wake Forest Baptist Medical Center. Dalton was the only person in the 2015 Acura, which was taken by Jones.

He said Jones fired a weapon at least once and officers defending themselves fired on the vehicle. Officers had approached the vehicle to arrest Jones when they were fired on.

Stokes said a number of officers were wearing body cameras during the shooting and he has reviewed the footage, which together shows multiple viewpoints of the shooting.

The chief said Jones fired at least one shot at Officer Jay Basinger and the officer returned fire and sought cover. Both Sgt. Michael Colvin and Officer Joseph Martinez then engaged the suspect, who had not yet dropped the firearm, and fired at him.

Stokes confirmed that all of the officers fired more than one shot, but he didn’t know currently which officer may have struck Jones.

Immediately after, the officers removed Jones from the car andbegan to administer first aid. Jones was conscious for a time. Rowan EMS arrived on the scene almost immediately and took over efforts to save Jones, but their efforts proved fruitless, Stokes said.

No officer was injured in the exchange of gunfire.

Stokes said the SBI will conduct an investigation of the shooting by the officers. They will present their findings to the Rowan district attorney to determine if their actions were lawful. “Once that investigation is complete, we will review the matter internally to ensure all policy and procedures were followed and if there are any lessons to learn,” Stokes said.

As is common practice, the three officers who discharged their weapons have been placed on limited duty, meaning they are not in an enforcement capacity while the investigation continues.

“I am saddened by the events of yesterday. No officer wants to take a life and the violence has no doubt affected our community sense of safety,” Stokes said.