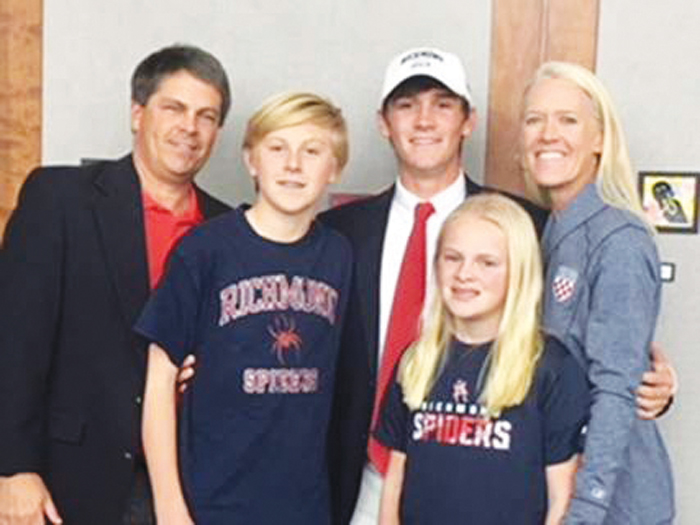 SALISBURY — As expected, Michael Childress signed his national letter-of-intent on Wednesday, choosing to continue his education and golf career at the University of Richmond.

For Childress, a Salisbury resident who attends Cannon School in Concord, his decision was as much about academics as it was about the Division I golf action.

“I’m so excited about going to Richmond,” said Childress. “For me, it’s not just a sports commitment. Obviously, I am excited about the golf part of it, but I’m just as excited about the academic opportunities and the other things like internships and leadership functions.”

Childress, one of the top junior golfers in the state for several years, can thank his mother, Dr. Donna Childress, for the attention to academics.

“My mom showed me the importance of understanding the balance that you need to be successful,” added Michael. “She’s always said that you’re a ‘student athlete, not an athlete student.’ Putting school work first has allowed me to go to a school like Richmond where, if professional golf doesn’t work out, I’ll have the opportunity to do something really enjoyable — that can also lead to success in life.”

At Cannon, Childress has been part of stable of excellent players that won two straight North Carolina Independent Athletic Association state titles in 2015 and 2016. The team finished runner-up to Ravenscroft last spring.

The 2016 state championship occurred at the Country Club of Salisbury, as Cannon won by 21 strokes over Christ School. Michael Sanders led Cannon with a brilliant 136 (67-69). Childress had Cannon’s second-best score at 145 (72-73).

Pat Whisenant is the coach at Cannon.

Those four signees will lead the Cougars’ effort to win another state championship before they graduate. “We’ll have a very good shot at it next spring,” said Childress. “We have two good freshmen coming up to help, so our top six can make it a special season.”

Away from high school golf, Childress’ performances in the junior ranks have been stellar. Mostly recently, he and Robbins qualified for next May’s U.S. Amateur Four-Ball championship.

Also this year, in July, Childress finished ninth out of 90 players in the North & South Junior Amateur at Pinehurst. In June, Childress reached the round of 64 in the 50th N.C. Junior Boys championship.

In all of his non-school events this year, Childress had a stroke average of 73.6.

Last November, Childress was recognized for raising over $10,000, three-fourths of which went to Rowan Helping Ministries. The remainder went to Jack Nicklaus’ Children’s Health Care Foundation in Florida. Childress was one of eight young golfers in the nation that were invited to visit the all-time great Nicklaus and current pro Rickie Fowler for the Leadership Links at The Bear’s Club in Jupiter, Fla.

In addition to his mother, Childress has had great guidance from his father, Jeff Childress, associate athletic director at Catawba (and former tennis coach there), and grandfather, Tom Childress, recently retired senior vice president at Catawba (after a 25-year career in athletics at Pfeiffer and Catawba).

“I have been extremely fortunate to grow up in a household where athletics are held in such high esteem,” said Childress. “Having a college coach as a dad, I learned so much, watching him deal with his tennis players.

“And I can’t really express how integral my grandfather has been in everything,” continued Childress. “Just observing the way he is around people, he has shown me how important relationships are with people, and of course, he has that coaching background as well, so he’s just been really, really important in getting me to where I am. He taught me that you want to compete as much as you can, but at the end of the day, it’s more about how you conduct yourself.”

At Richmond, Childress will have immediate help getting acclimated. Isabella Rusher, who, like Childress, calls the Country Club of Salisbury the home course, is a junior on the women’s golf team at Richmond. She has done well for the Spiders during her first two seasons.

“We talked a little bit about how neat it will be to have two from Salisbury there in the golf program,” said Childress. “We played a few times together at the club during the summer and it’s awesome to have someone who already knows the ‘ins and the outs’ around there.”

Childress credits local club pro Chad Campbell, his swing coach the past three years, as a major influence on his game.

“Chad has played a big part in my growth,” he said. “He helped bring some maturity to my game — he’s taught me that improvement doesn’t always happen quick. I’ve learned to be more patient.”

At Richmond, Childress plans to look into majors that are “business or law related,” or both. The possibilities are exciting to Childress.

“Again, Richmond is a really a good fit for me,” concluded Childress. “I think I could do well in the business realm of things, in marketing or some sort of athletic business — maybe a sports agent. Richmond has a dual degree in business and law and maybe I could put a sports turn on it. I’m looking forward to being pushed there — both academically and athletically.”

NOTES: Locally, Childress teamed with Charlie Graeber in 2014 to win the popular Crowder-Dorsett Labor Day Four Ball event at the club. … Childress has two teammates on the golf team from Salisbury at Cannon School this year — sophomore Mitch Jeter and freshman Charlie Barr.