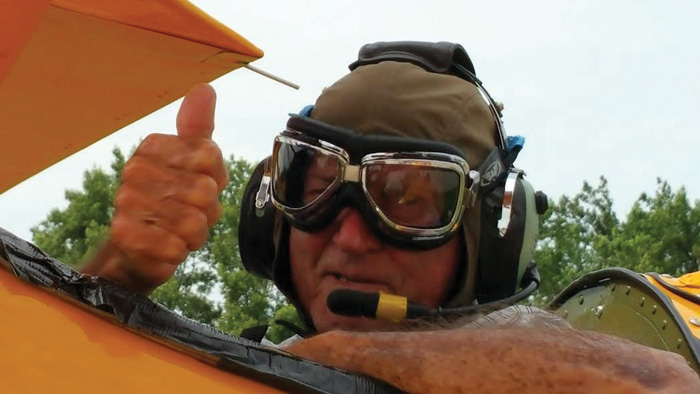 J.C. Ritchie of Salisbury gives a thumbs up before taking off in a Stearman PT 17 Kaydet, similar to what he trained on as a pilot in World War II. Photo courtesy of Darlene Ball

SALISBURY — It was a gift from Darlene Ball. J.C. Ritchie says it also was a way for them to take a trip so Darlene could visit her daughter in Virginia.

But what a present it was. Ritchie, who just turned 93 a few days ago, was able to take the stick again of a Boeing-Stearman PT-17 Kaydet — the same kind of open-cockpit, single-engine biplane he trained on during World War II.

In the air about 45 minutes with a pilot in the seat behind him, Ritchie was given the controls and allowed to do some dives and steep turns in the Kaydet on a beautiful, short-sleeve kind of day this past July.

He adds quickly he did not try any acrobatics, such as flying upside down.

“It was very interesting to me — and a real treat and exciting — to get back up there with the wind in your face,” Ritchie says.

The flight was offered through the Military Aviation Museum in Virginia Beach, Virginia.

Ritchie said he also was permitted to fly over the Atlantic Ocean. It was the first time he had flown a plane in close to 70 years.

A member of the Army Air Corps during the war, Ritchie just missed having to fly bombing missions in the Pacific. He had finished his training in Sebring, Florida, on B-17 bombers and was about to be trained on B-29s when the atomic bombs were dropped on Japan, ending World War II.

Within a week, Ritchie recalls, he was off the government payroll and going home, where many Salisburians remember him as a longtime Ford salesman, manager and dealership owner. The always active Ritchie still plays golf regularly. In fact, he has scored 10 aces over the years.

Ritchie trained in open-cockpit planes during wintry days in Helena, Arkansas. He and other pilots would chase barges up and down the Mississippi River toward Memphis, Tennessee. Ritchie says they also played chicken in their biplanes with trains and ruffled the feathers of locomotive engineers.

Ritchie downplays his flying experience, as he does most things. He was enthralled as much with the Military Aviation Museum, which has an impressive display of aircraft and depends heavily on about 250 volunteers.

The pilot for his PT-17 flight was an experienced Navy and commercial pilot — “well-educated, sharp personality,” Ritchie says.

They shared a lot of stories, and Ritchie says they became taller tales as their time together went on.

Before the men took off, Ritchie asked his new pilot friend whether he had gone through his checklist.

“I checked the gas; what else do you want me to check?” the pilot answered, and with a laugh they were off.

Ritchie says the PT-17s have a narrow landing gear and were always a handful to land on the grass runways. They could easily slide or flip onto their noses if you weren’t paying attention, Ritchie says.

Ritchie, a 1941 graduate of Boyden High School in Salisbury, was pursuing a civil engineering degree at N.C. State University when one night, as World War II consumed every conversation, he was among 12 fraternity buddies who recognized it was only a matter of time before they were all drafted.

So they decided that evening to enlist in the Army Air Corps and learn how to fly. The next Monday morning they showed up at the recruiting station in Raleigh, and Ritchie recalls how eventually they were sent all over the globe.

Ritchie earned his silver wings as a pilot and was commissioned a second lieutenant on June 27, 1944, at Spence Field in Moultrie, Georgia. Through all his training, Ritchie would never have to leave the States.

Back in Salisbury soon after the war, Ritchie made friends with a guy who was working on the transcontinental pipeline, and he briefly was able to fly his plane.

“I enjoyed it for a while,” Ritchie said.

But he already was married and raising a family and left the joy — and expense — of flying to others. Then, after so many years, came that great gift from Ball.

She had given the flight to Ritchie as a past birthday gift, and they combined it with the trip to see her daughter in Warrenton, Virginia. After a few days there, they stayed a night at the Williamsburg Inn and the following morning traveled to the aviation museum at Virginia Beach.

Once a pilot, always a pilot.

Forever Young: Dr. Clyde and his trumpet hit all…