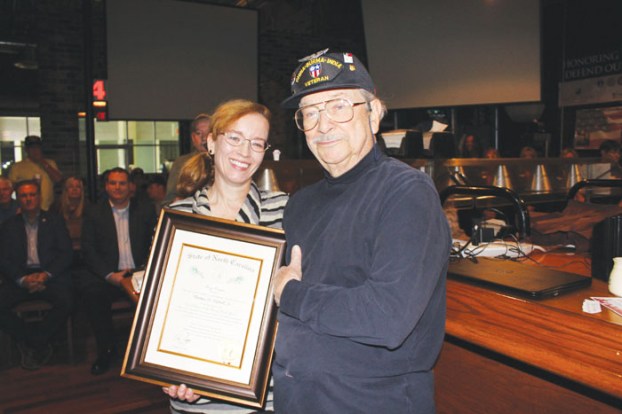 Tom Harrell shows off his Order of the Long Leaf Pine award at Thelma’s Frontier Coffee Shop on Thursday. With him is his daughter, Amy Williams. Andie Foley/Salisbury Post

Tom Harrell inducted into the Order of the Long Leaf Pine

SALISBURY — Retired radio professional Tom Harrell was inducted into the Order of the Long Leaf Pine on Tuesday.

The award is among the most prestigious of those conferred by the governor of North Carolina. It recognizes exemplary public service in the state, specifically that which goes “above and beyond the call of duty.”

Harrell, a 92-year-old veteran of World War II, co-founded the free weekly coffee shop for veterans in 2014. He was inspired to do so after visiting Richard’s Coffee Shop in Mooresville.

“I have had anything except a dull life, but one of the greatest things that’s happened to me along the way is when I walked into the coffee shop in July of ’95 in Mooresville,” said Harrell. “Richard Warren said, ‘Are you a veteran? … Come back on Thursday: the coffee is free, and the conversation is good.'”

Harrell said the concept of a similar offering in Salisbury just made sense because the city is home to one of the largest veterans hospitals in the state. His search for a willing restaurateur was on.

Many he approached showed no interest. They cited late closings and frowned on the thought of offering coffee for free, he said.

“When I talked to Thelma four years ago, that wasn’t the response I got,” Harrell said.

Beyond the coffee shop, Harrell’s lists of accomplishments are many.

Caskey said he and Harrell meet monthly over lunch or dinner, and his strong faith and love of country become apparent.

“(H)e talks every meal (about) how much he loves his country,” Caskey said. “The direction it’s headed in weighs heavy on his heart. He always talks about things that we need to do to try to make things better.”

With nearly 50 years in local radio and immeasurable time serving on local boards and committees, Harrell has been a man of action.

Harrell said the veterans he now serves as a nonagenarian have replaced many public and political figures in his personal circle. This, he says, is how he likes it.