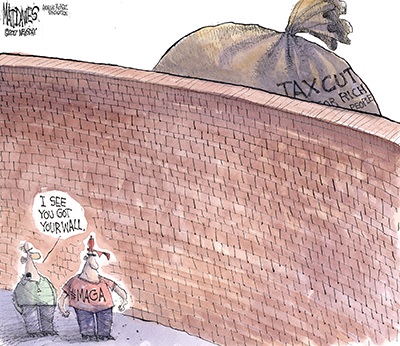 … Editorial: Salisbury gets a new start

My belief is that, for the most part, the diverse group that won this election will tackle the issues that the city of Salisbury.faces head-on — issues such as Fibrant, the dying downtown (the albatross around the neck known as The Empire Hotel), neighborhood safety and the outrageous amount of shootings (and deaths) must be solved.

This group, led by Al Heggins and David Post, must react swiftly, decisively and in the best interest of Salisbury as a whole. My congratulations to all.

I’m proud the city of Salisbury elected the first black female mayor. The city is growing and it’s time for a change. Historic firsts in Charlotte and Salisbury.

Some historical facts about this election:

4. First one-term mayor in the city’s history in well over two decades — Karen

This is an election of firsts.

… Cartoon is not funny

Too many PCs with media access and time to be petty. No blood, no harm, no foul.

It was not funny because it was not a comic. It was a political cartoon. They rarely are funny. A columnist could have cobbled together a thousand words about how commonplace mass shootings have become and how we are becoming hardened as a society, but the cartoonist deftly condensed all that rambling prattle into one terse, succinct, thought-provoking picture.

… Forever Young: Dr. Clyde and his trumpet hit all the high notes

Will miss Dr. Young and his trumpet at all the American Legion games.

I want the family to know how much Clyde meant to myself. He was a big influence on my younger years when his son, Mike, and I were best friends.

… Letter: Innocent lives lost in US should prompt action too

Should but won’t. Congress has a gun at their back — NRA.

… New yoga studio is a soulful addition to the SoFul neighborhood

This is such a special place. It has a great calming atmosphere. Morning sun streams in through the big windows overlooking South Fulton and there is a great variety of classes to choose from. Evening classes are offered, too. Good luck to all the ladies. I am so glad you are here.

So excited to be bringing more yoga to Salisbury. And gratified at the enthusiastic response we’ve received in our first two weeks.

Salisbury has so much more going on and so many things to do and see that last summer I gave my 16-year-old free rein to go and explore — until a group of them went out to eat and there was a shooting a block from them.

Still I let her go and made sure where she was at all times.  It happened again, and again. Now, none of us parents let our children go to Salisbury to do anything. Lexington, Concord and Kannapolis are the places to go now. How sad is that?

There has to be something that can be done. I love this town; it is my home. But home is where you feel safe, and I don’t feel safe uptown anymore.

Where does Salisbury have so much going at? The skating rink is closed and the affordable $2 movie is closed. There’s not even a mall for them to enjoy anymore.

Oh, there’s the Y, the bowling alley and Hall’s Gym.

We need a structured after-school program and skating, go-kart racing and another affordable theater — all of which could be housed in the old mall. They could use that as a youth center with law enforcement presence. … The children need something to pique their interest. I say get them early and keep ’em busy.

Yeah, there really isn’t anything to do here anymore for kids growing up. Every affordable option has been shut down. Can’t expect people to pay $30 to hang out at a movie theater. Bored teens are turning to drugs and committing crimes to have fun now. If you just look you’ll see it.

Here’s how you fix the problem: Suspend Section 8 housing, invest in the property of low-income neighborhoods, be harder on drug crimes and don’t worry about the overcrowding of our jail system. Until you do those things, this city will never be what it once was.

Increasing the war on drugs won’t help. Legalize it all; it undercuts dealers. It’s immoral to try and legislate morality. Suspend Section 8? How about we abolish all entitlements?

We as residents need to be aware. We need to talk to our kids and stop this crap. Teach them some responsibility for their actions.

Our police need to get really on top of this and our courts need to stop putting offenders back on the streets. Send a message; we are not going to put up with this behavior or anyone getting shot any longer — not in this county, not in our city. … We need a John Wayne-type of announcement: “Get out now cause we are waging a war on criminals and we are winning and they are moving out!”

That would not have happened with Fibrant. Local Fibrant service employees would have hopped on the problem immediately and fixed it.

Kids use internet-based textbooks and software to write papers and take tests. Not having the internet in schools — when each student has a laptop — is more than an inconvenience.

Many businesses cannot operate without an electronic cash register. Most take more credit cards than cash and use electronic equipment to track inventory and to order more goods. No internet, no way to do business. Few medical providers, especially drugstores, can just hand out change in cash — they simply cannot serve the patient without access to the internet.

Our esteemed county and state government officials should change the laws to ensure Fibrant is in our schools. Support local.

AT&T needs redundancy service for when a cable breaks, like Fibrant has.

The name leads one to believe that they are going to be aiding veterans in some way with the coffee business but the article says nothing about it. Am I missing something?

The story states discounts are given to military and their families, and that he is actively trying to be able to provide coffee in the waiting room at the VA. And the fact that he is marketing his product in patriotic-themed packaging is in itself more “aid” to the overall health of this country than many businesses exert in today’s upside down world.

… ‘My sunshine’: Family creates support group to honor son who died of overdose

I just lost my son Oct. 5.  Watching him battle his addiction was the hardest thing our family has ever done, and in the end we couldn’t save him. My heart goes out to all the families struggling, because if not helped the and result is death.

This is so great. Stephanie, this is wonderful. People really have nowhere to turn. Thank y’all.

These two are the strongest women I know. Hunter was my first love and I became very close to his family. My heart stays with them every day and I believe this group can really bring hurting or struggling families together. I love them both very dearly and pray for them every night.

I am so sorry for your loss. I am so proud of the work y’all are doing.

I lost a son to health issues and now I have my other son battling a drug addiction. I, too, have been with him to the ER after an overdose and basically have begged the doctors and social workers for help, just to be handed a list of places that the closest is in Charlotte.

I am grateful for what y’all are doing. There need to be more resources for drug rehabilitation in Rowan and Cabarrus counties

I lived in Granite Quarry all of my life, and I remember him coming by to see what we were up to. He used to get on to me when I was doing something stupid, and I always showed respect to him. It brings back childhood memories.

Chief Adams held a special place in my heart. He gave me my first opportunity to serve in law enforcement, as the first African-American to serve in Granite Quarry in April 1997, and later in the town of Faith with the Granite Quarry-Faith Police Department. A servant leader who cared for his community, and most of all his officers. No matter the time of day or night, I could count on him to assist in whatever the task. Farewell, Chief. You will be greatly missed.

While the shootings continue to be deplorable, I think the fact that, out of the 10 homicides, all 10 have seen arrests made is an important point that cannot be understated.

Major thanks and congratulations need to be made towards the Salisbury Police Department and the changes that have taken place within the department that have allowed them to get the job done.

However, major thanks must be shown towards those members within the community who have become fed up with the violence and have become silent no more. The police cannot do their jobs when witnesses do not share what they know, and the bravery and confidence needed to share that information has been crucial.

To me, a major corner has been turned. Those who are willing to commit nefarious acts should take notice that, if you do, people will point you out, you will be hunted down, you will be caught and justice will await you.

This is a great idea, Jeff.  Downtown could be an amazing destination paradise like so many other N.C. cities have already done, creating charm and excitement, drawing people to the the history, the shopping, the architecture and the food. Salisbury already has a lot going for her, and the new park will be an amazing addition. Let’s get this done.