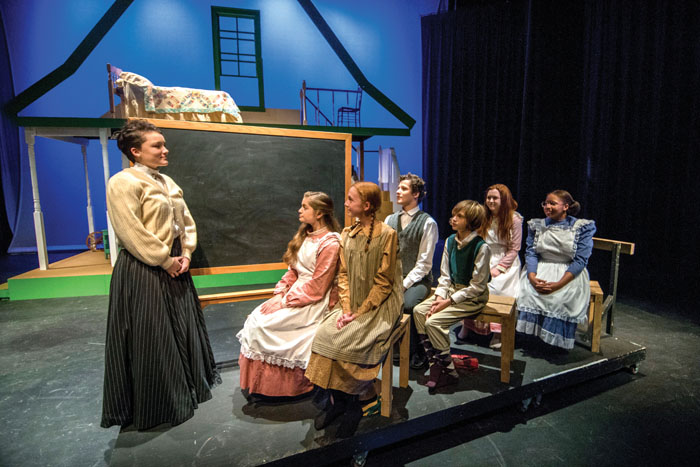 SALISBURY — Local students had the chance to see and review Norvell Theater’s production of “Anne of Green Gables” this week. The play brings to life the beloved children’s book by L.M. Montgomery.

Tickets are $12 for adults and $10 for seniors or students. For tickets, call 704-633-5471 or purchase them online at PiedmontPlayers.com

“I love ‘Anne of Green Gables’ because it was creative. The costumes were beautiful. The background was awesome. All the people were great.” — Adalyn Yost

“I rate this ***** (five stars). I loved the effort they put into it. It was also great because even though they had to cut out some scenes, it was still awesome. I felt the actors were actually in the play, not acting, but real. They showed emotion and grace while acting. I recommend watching this great play. I also want to add that I loved the setting and how they made the clothes. My friend Laura was in it, and she played Marilla. I got to hug her. She was great.” — Brooks Zino

“I loved ‘Anne of Green Gables’ because the costumes and scenery were amazing. The actors had so many lines to remember. The play was so wonderful, and I want to see it again. All the effort that was put into it was a lot. I thought it was cool because it looked like the house was built. It even had the upstairs too. If I were you, I would go watch it.” — Emory Haynes

“I thought it was great, although I thought the set could have been better. But Anne finally got adopted by a good family although at first the mom did not want her. But at the end, she loved her with all her heart.” — Avia Long

“The scenery was beautiful and amazing. It was kind of sad when Matthew died.” — Matthew Bowersox

“I think that the actors and actresses did very well. I also think that the costumes and scenery were very well done. The play ‘Anne of Green Gables’ was amazing.” — Emma Ott

“I enjoyed ‘Anne of Green Gables’ because they had incredibly realistic costumes, amazing scenery, and spectacular actors.” — Grace Taylor

“I really liked all of the play. It is one of my favorites. I definitely recommend it for other people to watch. I really liked the part when Matthew said, ‘Go, Anne.’ It was so funny that I laughed for at least 30 seconds. The play was just so creative so I do recommend it for everybody. I hope you like it too.” — Mac Blankenship

“I think it was sad because the owners of Green Gables wanted a boy instead of a girl.” — Gavin

“It was great because of the actors.” — Fletcher

“I loved it because the characters were really good.” — Bryce

“It was a new experience because I had never heard the story before.” — Lucas

“I liked Anne because she was trying to be good.” — Sam

“I liked Anne because she was always asking questions.” — Hayden

“I think they did a really good job. I was surprised that the dad died.” — Meredith

“I really think the characters did a good job of acting.” — Anna Kate

“I liked the acting of Marilla in the play.” — Henry

“I liked the actress who played Ann with an ‘e.'” — Trisha

“It was very unique and special.” — Luke

“It was the best play I have ever seen.” — James

“I thought the characters did really well.”  — Georgia

“I enjoyed ‘Anne of Green Gables’ because Anne was the main character and because she was smart. She cared about the people that lived with her and I loved the house. I thought it looked cool. I liked the play.” — Jayden W.

“I watched ‘Anne of Green Gables’ and I liked it because it was funny. My favorite character was Matthew.” — Jacob F.

“I liked the play because the outfits were old-timey. They also showed passion, and I liked the lighting changes and I liked the graphics. I was entertained. Some parts were very funny. I loved this play so much.” — Adaline B.