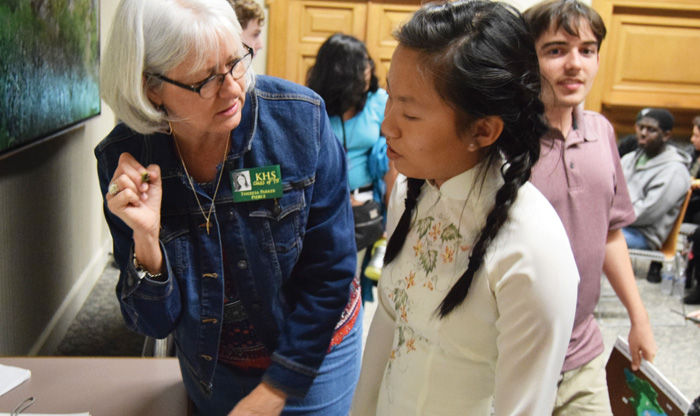 Theresa Pierce, left, talks to Amy Nguyen, right, about her project on the Vietnam War era. Nguyen is wearing a traditional Vietnamese dress which belonged to her grandmother. Rebecca Rider/Salisbury Post

One by one, students from Theresa Pierce’s honors world history class talked about what they’d learned from studying the Vietnam War.

The program, dubbed “The Times They Are a’Changing,” is the culmination of an award the library received from the American Library Association and WETA in Washington. The award helps facilitate programming and conversation on the Vietnam War and includes viewings of the 18-hour “The Vietnam War” documentary that aired on PBS in September.

The Rowan Public Library was one of only two in North Carolina, and 50 nationwide, to receive the award.

Pierce said the library approached her about a possible collaboration.

“So they asked us, ‘Well, what could we do?” Pierce said.

While Pierce’s classes study the conflict every year, the partnership gave students the opportunity to lift the veil on a war that tore the country apart.

“The kids have said to me, ‘Now I get it.’ It’s like digging deeper. …It’s more meaningful than just pencil and paper,” Pierce said.

Since the documentary began airing on PBS in September, Pierce said there’s been a “big push” for educators to examine the Vietnam War and the scars it left on two countries.

Pierce said she remembers living through the strife of the war herself.

“I remember watching it every night on black-and-white TV. … I remember just the horrific images on the television,” she said.

And she remembers the violent backlash from the American public. Pierce, whose father is a World War II veteran, said the public’s reaction to Vietnam veterans left her “heartbroken.”

“How could they treat a soldier that way — especially one that was drafted?” she remembers wondering.

Over the past month, Pierce’s students have studied every aspect of the war and the era. They pulled together topography maps, compared music from America and Vietnam, and imagined diaries of soldiers.

On Monday, they came together, dressed in prairie skirts, traditional Vietnamese clothing passed down from a grandparent or fringed jackets that relatives had worn to Woodstock.

Rowan Public Library representatives chose a handful of students to present their projects to the general public, and students talked about what they’d learned — the horror of the war, the struggle of the times and the stories of their own families.

“We kind of learned about a history no one else knew about,” student Dylan Kegeris said.

Vietnam veterans are a generation that is beginning to pass away, he said, and people who lived through it are reluctant to talk about the war — so there’s much that’s left out of history books.

Coleman Bready said he had been surprised by learning about the difficult terrain and stress soldiers had been under.

“It was a very hostile environment. … It’s heartbreaking to think of people fighting in that,” he said.

Student Amy Nguyen said the project gave her a chance to learn more about her family.

“I didn’t know much about my heritage,” she said.

Nguyen wore a handmade Vietnamese dress that belonged to her grandmother, who wore it only on special occasions.

While what she’d learned had been eye-opening, Nguyen said there was one quote from the lessons that stuck out to her: “Vietnam is a country, not a war.”