Sharon Hovis wins seat on Spencer Board of Aldermen 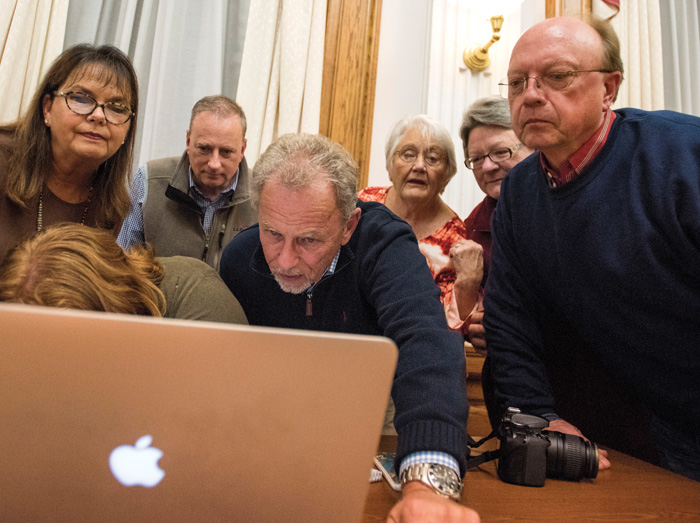 JON C. LAKEY / SALISBURY POST Spencer candidates and family squeeze in to watch the final results of the Spencer votes to be counted and updated. David Lamanno (back left), Jim Gobbel (front), Mike Boone (far right) and Sylvia Chillcott (back right) all got re-elected. Candidates for attend one of two locations to view the results of the several municipal races that was voted on on Tuesday. Most gathered at the Rowan County Board of Elections office at the West End Plaza while a smaller group gathered at the traditional location of the Rowan County Commission Chambers in downtown Salisbury. Tuesday, November 7, 2017, in Salisbury, N.C.

SPENCER — The Spencer Board of Aldermen traded one member for another once all votes were tallied Tuesday. Challenger Sharon Hovis beat out incumbent Howard White for a spot on the six-member board.

Hovis, 49, earned the most votes of any board candidate with 235 — beaten only by Mayor Jim Gobbel, who earned 272. Gobbel, 66, ran for mayor unopposed.

Hovis, 49, is a Spencer resident who serves as the police chief in East Spencer. A Rowan County native, she earned her degree in criminal justice from Livingstone College.

She surged forward in the early minutes after polls closed and kept the lead until all results were in.

“I thought I could, but I didn’t think I could smash,” she joked. “But I’m humbled. I’m thankful all these people believed in me.”

Hovis said she knew that the board has lots of projects and dreams for the town and that she is eager to work with others on the board.

“I just want to be a part of what they’re trying to do,” she said.

Hovis also plans to try to communicate constantly with community residents about what the board is working on and how they can help or be involved.

“I want to keep enticing and inviting them to come to the board meetings,” she said, “because their opinion matters.”

After his loss, White said he wanted to thank the people who did vote for him, and he wished those elected Tuesday “the best of luck going forward.”

Of his time on the board he said: “I enjoyed it thoroughly and wouldn’t change it for anything.”

White plans to stay involved in the town.

Incumbents sat together, chatting as the time passed and races from other towns were called.

Results from Spencer were the last to come in Tuesday night, showing up on the State Board of Elections’ website after races in all other towns had been called.

By the end of the night, Chillcott said she was relieved.

“I’m glad it’s over,” she said with a laugh. “We got here first this evening, and we’re the last to leave.”

Re-elected board members said they were pleased with the results and look forward to improving the town. Gobbel said he hopes that he and the board will be able to bring businesses and industry into Spencer over the next few years. He also extended a hand to Hovis.

“We welcome our new board member,” he said.

Board members said they look forward to working with her and to the future of the town.

“I’m excited about seeing the board continuing the work we’ve started and a bit of a new look over the next two years,” Kevin Jones said.

“I feel that we have a great board, and there’s a lot of progress for Spencer ahead with the new board,” David Smith said. “ …  I think there’s gonna be great things coming out of this board.”