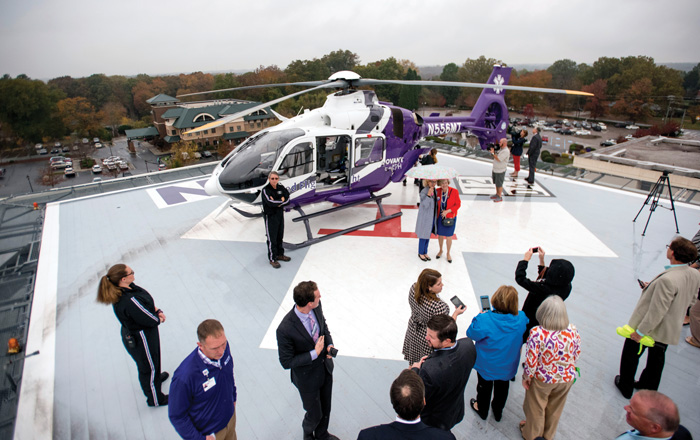 SALISBURY — Med Trans Regional Director Henry Ward got a call from a South Carolina fire chief who was bragging.

“Which is, normally, you get those phone calls and you’re like, ‘Oh, how’s this going to go?” Ward said.

But in this case, it was “a great call” — the fire chief had called to brag about the efficiency of a Med Trans helicopter.

The launch celebrated a new partnership between Novant Health and Med Trans, as well as the fact that Rowan County was selected to be the base for the aircraft.

Ward said Med Trans’ decision to partner with Novant Health was based on their mutual focus on compassion for patients.

“And so, when Novant and us started talking, it was as much us interviewing them as them interviewing us for the safety records, their patient care, their focus, their vision and values. And our DNAs are so much alike,” Ward said.

“Our emergency department sees all types of patients, from sprained ankles to broken arms to situations that are life and death,” Bream said. “And it’s not just the transport time, but about the level of care that patients will receive aboard Novant Health Med Flight.”

He said the Med Flight helicopter would primarily serve patients whose conditions must be treated quickly in order to prevent long-term damage, like trauma and stroke victims.

“That procedure needs to be done, to have optimal outcomes, in less than six hours,” Bream said.

Dari Caldwell, president of Novant Health Rowan Medical Center, said that given the heavy traffic on Interstates 77 and 85, it can be difficult to get patients to other facilities quickly using ground transportation.

Bill Wagoner, chairman of the Novant Health board of directors, said the helicopter will cover 170 nautical miles in every direction from the center, where it is based.

Wagoner said those 170 nautical miles include areas of South Carolina, a “tremendous amount” of North Carolina and parts of southern Virginia.

“And with that, we’re going to be taking people to all of the critical care areas that they may need,” Wagoner said.

He said the helicopter will transport people to and from any facility, even if it’s not associated with Novant Health.

Caldwell said she is “very proud.”

“Not only Novant Health Rowan Medical Center, but very proud as Rowan County to see this kind of growth in our community. I think it speaks volumes about the progress we’re making in Rowan County and the progress yet to come,” Caldwell said.

The helicopter is a new 2017 H135 twin-engine aircraft that is capable of flying in almost all weather conditions, according to Ward.

Three people will work on the helicopter — a flight paramedic, a flight nurse and a pilot.

Novant Health estimates that the helicopter will transport 300 to 400 people in its first year of service.

According to a Novant Health news release, the helicopter will join 13 ambulances in Novant Health’s existing critical care transportation fleet.