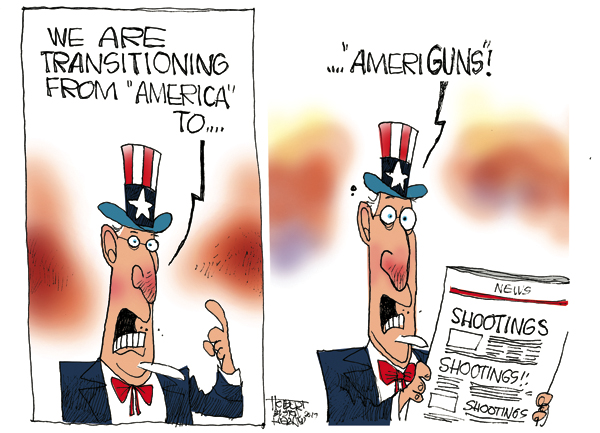 Leonard Pitts: Why are we OK with mass shootings?

Everybody hates them, of course: innocent death, fathers, fiances, best friends, and sons snatched violently away, sudden carnage crashing ordinary days. But I hate them for an additional reason.

Shall I parse the killer’s motivations? I did that after Columbine.

Shall I praise heroism in the midst of massacre? I did that after Aurora.

Shall I call out the evil in this world? I did that after Virginia Tech.

Shall I demand a re-examination of our gun laws? I did that after Umpqua Community College.

And it’s a mark of how often this sort of thing happens, how routine it has become, that you probably don’t even remember Umpqua. Or Isla Vista.

So no, I’ve got nothing — and even that is something I’ve said before.

The need to have something is, as you doubtless know, occasioned by our latest atrocity: 26 people shot dead in a rural church near San Antonio. Half of the victims reportedly were children, including a toddler 18 months old. The 26-year-old killer, reportedly motivated by a domestic dispute, shot babies point blank, according to an eyewitness.

Yet even at that wretched extreme, the whole thing feels routine, just another Sunday in America. Which leaves me with nothing. Except a question:

Why are we OK with this?

Not you and me as individuals, perhaps. But America, as a corporate body? It seems ever more obvious that for all the lip service we pay to “thoughts and prayers,” for all the candles we light and tears we weep, this is a thing we accept. As opposed to Islamic terror, which we don’t. You can read the distinction starkly in Donald Trump’s tweets.

After a Muslim shot up a nightclub in Orlando, the then-candidate decried our lack of toughness and demanded a ban on Muslim travel.

After a non-Muslim killed nearly 60 people in Las Vegas and wounded over 500 more, he said the killer’s “wires were crossed pretty badly in his brain.”

After a Muslim killed eight people in New York City, he mused about sending him to Gitmo and demanded the “DEATH PENALTY.”

After Sunday’s murders by a non-Muslim, he promised to stand with the people of Sutherland Springs.

It’s not that Trump won’t condemn a non-Muslim killer, but that he saves his greatest energy and outrage for the killer who claims to worship Islam, even though the former is the far deadlier threat.

And though Trump is often an outlier, his moral inconsistency here seems to reflect America’s own. Do you think that if the Texas killer had had an exotic name or begun his attack with a cry of “Allahu Akbar!” our responses would be limited to thoughts and prayers and lawmakers would be content to mouth impotent pieties?

As a wag named Michael Skolnik pointed out on Twitter, “One shoe bomber tried to blow up a plane and now we take off our shoes.” When the killer is not a Muslim, though, we treat the killing like rain, a natural vexation we lament but also accept because, what are you going to do?

But this is not rain, just a different kind of murder. Why are we OK with it?

Not until it stops being OK.

Yesterday, I was looking for the Sugar Fairy Sweet Shop in Spencer. I wondered why the banners and sandwich board... read more