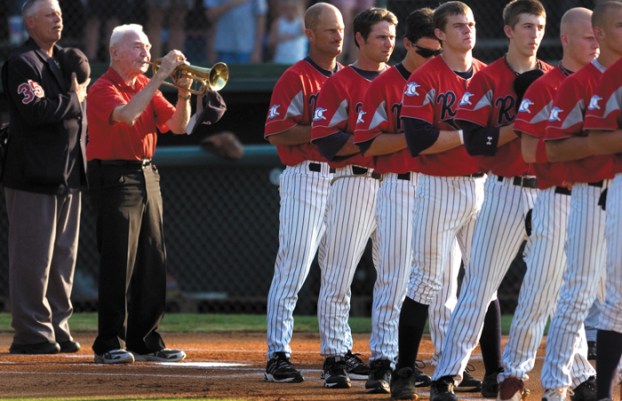 Forever Young: Dr. Clyde and his trumpet hit all the high notes

SALISBURY — Many great things could be mentioned about Dr. Clyde Young — his service with the Navy in World War II, his 41-year career as a pediatric dentist, his community service activities and his passion for golf and Duke University sports.

But let’s talk about Clyde and his trumpet. The two were inseparable.

Since the 1960s — Young himself didn’t know exactly when it started — Rowan County American Legion baseball fans at Newman Park knew to anticipate Young belting out notes on his trumpet.

Young died Monday at the Trinity Oaks Health and Rehabilitation Center. He was 94, and for the last couple of years, his health hadn’t allowed him to attend the legion games.

On his trumpet — and he had the lung capacity to make the sound carry — Young often played the national anthem. blasted through patriotic songs during the seventh-inning stretch, encouraged the home team to rally and even took musical jabs at the umpires.

Always mischievous, Young might play strands of “Three Blind Mice,” if an umpiring decision went against the home team. “Occasionally, someone would have to say, ‘Let’s not do that,'” Carter said.

When called on, he played “Happy Birthday” for someone in the stands or “Here Comes the Bride” to mark a marriage or anniversary. A rain delay might prompt Young to trumpet “Stormy Weather.” He always tried to cover all the military branch songs between innings and often saved “God Bless America” for the seventh-inning stretch.

In later years, Young wrote down a playlist in a notepad to make sure he didn’t forget any of military anthems. This was American Legion baseball, remember.

Rowan players heading to the plate sometimes had their own walk-up music to Clyde’s trumpet.  “I try to inspire people,” Young said back in 2014.

Young and his trumpet would travel. When the Rowan team made the playoffs, Young drove to the away games and would play in the stands, “if he could get his trumpet in the door,” Carter says.

Some years back, Young was escorted out an exit gate in Sumter, S.C., by host team officials who didn’t appreciate the trumpet. Young then stood outside the stadium and played loud enough so the crowd could still hear.

In 2014, the American Legion honored Young (and hot dog man Pinky Trexler) before a game. Young received his plaque, took some bows near home plate, returned to a walker-accessible spot behind the home dugout and promptly played his first song, “Take Me Out to the Ballgame.”

Young liked to say his salary for playing trumpet at Newman Park was always free admission, two Cheerwines and two Pinky dogs per game. He thought of it as his summer job.

In his younger days, Young positioned himself toward the top left side of the main grandstand.

Young carried his trumpet to other places — Salisbury High, Catawba College and community events. When he was part of Veterans Honor Flight to Washington, D.C., he walked up and down the center aisle, playing a few of the military songs.

When permitted, he also would play his trumpet at Duke University games. Young never attended Duke, but his love for the Blue Devils never wavered.

Young and his second wife, Libby, also entertained at clubs and parties over the years.

Carter grew up with her father playing the trumpet at their home in Forest Hills.

“He used to play on the screened-in porch of our house, and it echoed through the neighborhood,” Carter said. “Everyone knew when he was playing.”

Carter isn’t exactly sure when her father started playing the trumpet — she thinks it was in high school. He played a lot in the Navy and later in Salisbury formed a band he called The Music Makers.

Carter recalled the bandstands holding everybody’s music that he set up in the garage for the practices. He handled the band’s bookings, and The Music Makers always played in matching jackets.

“It was not a swing band, but it would be the equivalent of that now,” Carter said.

Music — particularly jazz — and golf probably were his two biggest loves beyond family.

A memorial service for Young will be held at 11 a.m. Thursday at First United Methodist Church, and his burial will take place at Rowan Memorial Park before the funeral.

Carter thinks her father’s music — and trumpet — kept him young.

“He enjoyed life, every minute of it,” she said.

GRANITE QUARRY — It took Kim Cress’ daughter, who was flying for Delta some 800 miles away, to instruct him... read more