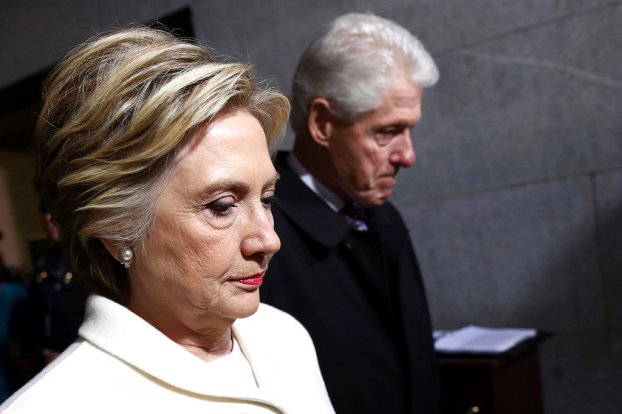 FILE - In this Jan. 20, 2017, file photo, former Sen. Hillary Clinton and former President Bill Clinton arrive on the West Front of the U.S. Capitol on Friday, Jan. 20, 2017, in Washington, for the inauguration ceremony of Donald J. Trump as the 45th president of the United States. Time has not healed the Democratic party’s wounds. On Election Day 2016, Democrats suffered a devastating and shocking loss. A year later, they’re still sorting through the wreckage. The infighting, the divisive personalities and the questions about how it happened are still front and center, threatening to hold the party back in elections on Tuesday and into next year’s midterms. (Win McNamee/Pool Photo via AP, File)

How do they do it? I am not the first to compare the Clintons to Harry Houdini, the great magician and escape artist, but Bill and Hillary make him look like a rank amateur.

No law seems to touch them. No regulation seems to control them. No prosecutor wants to take the risk of holding either Clinton accountable for anything. OK, Bill was impeached by a Republican House, but not convicted in the Senate.

The latest escape for Hillary involves former FBI Director James Comey and the law governing classified materials. The Hill newspaper’s John Solomon has obtained an early draft of Comey’s statement about Hillary’s mishandling of classified documents on her email account.

Initially, Comey was going to charge her with being “grossly negligent,” a violation of the law which subjects one to prison and fines. In a public statement that sounded like an indictment, Comey changed his description of her actions to “extremely careless,” a distinction without a difference, but which he said was not an indictable offense because she didn’t intend to violate the law.

About Comey’s rationale for changing the words in his draft memo, the public does not yet know, but Comey testified before a Senate committee that it made him “mildly nauseous” when he considered the FBI’s impact on the election.

Gregg Jarrett, an attorney who frequently offers legal opinions on the Fox News, has been keeping track of Hillary Clinton’s skirting of the laws and escapes from its penalties.

Here is his account of recent examples of what might be a twist on the song “I Fought the Law (And the Law Won).” In her case, Hillary fought the law and bested it.

As for the anti-Trump Russian dossier, which a Republican operative initially paid for and Democrats, including those associated with the Clinton campaign and the Democratic National Committee took over and continued to pay for, Jarrett says it’s a violation of federal law to pay foreign nationals to impact a U.S. political campaign (52 USC 30121), and it’s also a violation to file a false or misleading campaign report (52 USC 30101). He said it appears the Clinton campaign did just that by financing the dossier through middlemen.

“I’ve been hearing Democrats say, ‘Oh, those are just civil penalties,’” says Jarrett. “They are not. The government produces a book — it’s 319 pages — outlining the federal election laws and all those who have been criminally prosecuted and ended up in prison.”

How does Hillary Clinton get away with it? Jarrett says: “The Clintons are escape artists that would make Houdini proud. Whenever they are caught dangling their feet over the edge of illegality, they usually dummy up.”

When Hillary Clinton spoke with FBI investigators about her private email server, she said, “I cannot recall” 39 times.

If the Justice Department refuses to appoint a special counsel to hold Hillary accountable under the laws the rest of us can’t escape, and if Robert Mueller won’t do it, then Congress should continue with its own investigations.

We often hear “no one is above the law.” That has never applied to the Clintons.

That loud sound you heard Tuesday night was Republicans in North Carolina gulping nervously as the election returns from across... read more