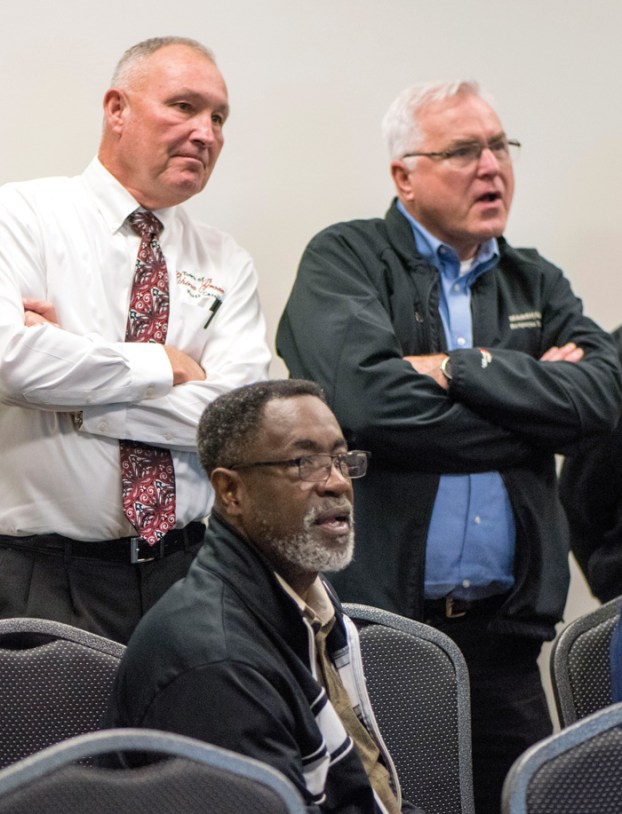 JON C. LAKEY / SALISBURY POST China Grove's Arthur Heggins (front) and Rodney Phillips (back right) and Charles Seaford (right) watch the results of the China Grove election come in at the Board of Elections. Tuesday, November 7, 2017, in Salisbury, N.C. Arthur Heggins, owner of Wash Me Detail Shop in China Grove, was elected to his first four-year term. He faced two other new faces in the town council race.

This was a big night for the Heggins family, as Heggins’ cousin Al, claimed the top spot in Salisbury’s City Council race.

Heggins received 194 votes in China Grove. He said the victory represented a huge milestone for the city.

“For me, being the first black man to ever run for elected office in China Grove and to get the position is a tremendous feat,” he said. “I’m so grateful and excited for the opportunity.

Heggins’ next steps on the council are to make further contact with present members. He said he wants to educate himself on where they are and what they’re doing. Specifically, he wants a firm understanding of what is in the future for China Grove.

Brandon Linn, a Landis Police officer, and Charles Seaford, a training coordinator at Buck Combined Cycle Plant, were each re-elected for their third four-year terms on the council. Linn received 221 votes, and Seaford received 184.

“I’m so very honored that the people of China Grove thought so highly of me,” Linn said. “I think (today’s results) reflect that it’s all about how you treat people. If you treat them well you’ll get good results.”

Linn said he is ready to “hit the ground running.” Specifically, he plans to work with other council members to recruit businesses to the town and work towards securing grant funds for a local youth sport complex.

Seaford said the pair’s re-election was grounded on the hard work they’ve put in over the last eight years.

“We spent most of the day together at the community center as voting took place,” he said. “I had a real good time getting to know (him) and I look forward to serving with him. He’s a great man and very well thought of in this community.”