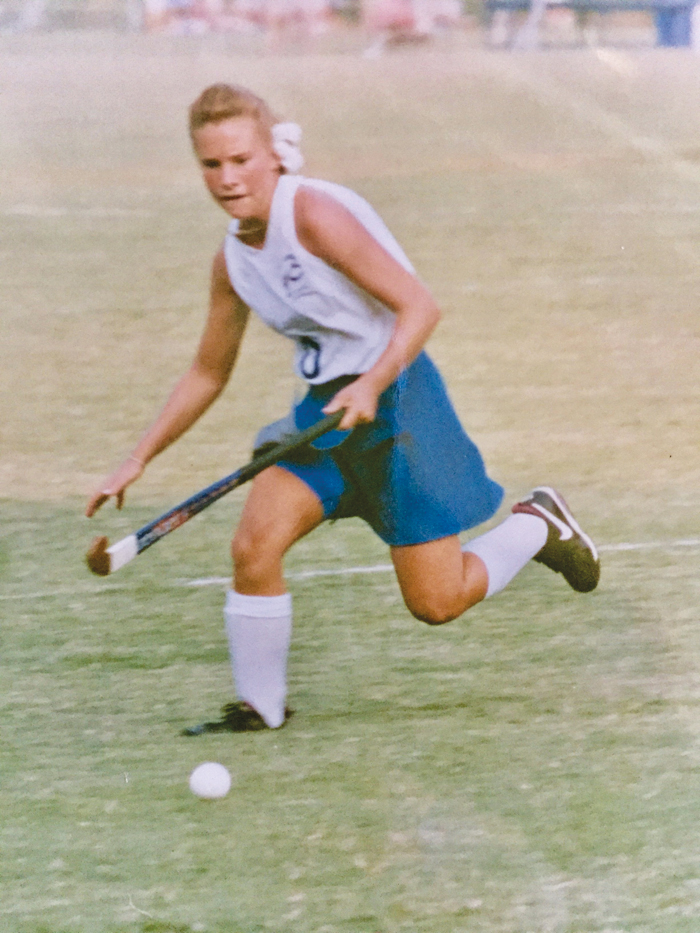 Catawba Sports Information ... Adrian Whitley Gantt, playing field hockey during her career at Catawba College (1994-98). Gantt, who goes into Catawba’s Sports Hall of Fame on Friday night, also played softball for the Indians. She also returned to coach both sports.

SALISBURY — Adrian Gantt is standing on third base, but not because she just laced a triple to the gap.

The former Catawba field hockey and softball standout is there because she’s prudently navigated around life’s tricky basepaths and arrived with a smile.

“There’s a lot of determination here,” Gantt said. “It’s in my blood. It’s something that’s carried me a long way.”

“It’s a phenomenal list of people going in,” said Gantt, who was notified by Associate Athletic Director Jeff Childress early last summer. “I was more surprised and shocked than anything. There are so many people more deserving than me, by all means of the word. It’s truly an honor.”

Gantt’s induction writes a new chapter in school history. She is the wife of Catawba baseball coach Jim Gantt — making them the first husband-wife tandem installed in the hall. She’s also the daughter of Nan Whitley, Catawba’s long-time softball and field hockey coach and the first female inducted — making them the first mother-daughter pair to be enshrined as well.

“I was recruited to play softball elsewhere, at a Division I school,” said Gantt, an East Rowan High School graduate. “But I wanted to play both field hockey and softball. And Catawba’s been a part of my life since I was three or four, when my mom started coaching there, so the decision wasn’t that hard.”

Playing center mid and center field for her mother from 1994-98 was never easy, but Gantt was twice an all-American in field hockey and a two-time all-SAC selection in softball.

“I was probably harder on her than some of the others,” said Whitley. “I had rules to follow and she adjusted. She’s always been very open, strong-willed and independent. As an athlete, she would go the extra mile and do what needed to be done.”

Through it all, Gantt maintained a cheery demeanor. “I felt I was under extra scrutiny from her,” she recalled. “Being there, playing for my mom, was hard at first. There were higher expectations than what should have been. And developing peer relationships was also a challenge, but we got past all of that. Looking back, it was a happy time.”

Gantt finished her softball career with 109 hits, 67 runs scored and 38 stolen bases. Her field hockey stats pale in comparison — two goals and nine assists, including a team-high six as a senior — but she clearly wasn’t designed for the gentle cycle.

“I was very, very aggressive,” she explained. “I wasn’t always the most talented player on the field, but I wasn’t going to be outworked. I was one of those blue-collar players, the ones who work their tails off.”

In 1998, Gantt was named the school’s Lomax Award winner, an honor bestowed annually on Catawba’s best senior female athlete. She graduated with a degree in biology, then earned a master’s in exercise science from Appalachian State. From the fall of 2000 through this past spring, she served as a Catawba assistant softball coach — under her mom’s watchful tutelage — where her influence and caring nature flourished.

“She was honestly my biggest influence,” said Amanda Watson (formerly Terry), the girls tennis coach at East Montgomery High School and a Catawba outfielder from 2009-13. “If I had a role model, she was it. She inspired me to go into coaching. She built that character into me.”

Gantt’s coaching style was as forthright as her playing career. “She’s somebody who would push you and push you,” said Jessica Rivera, a catcher from 2002-05, who currently works as a Novant physical therapist. “But she did it because she saw your potential. She did it in a supportive way. It’s funny. She evolved from being a coach to being one of my best friends.”

Gantt’s contract with Catawba wasn’t renewed after last season, leaving her time to concentrate on her business as owner of Extreme Performance, a Salisbury training facility where athletes can work on improving softball and baseball skills. “It’s not designed for your everyday players,” she insisted. “It’s designed for intense players who are motivated to get better.”

“I’ll be done in December,” she said, a wide grin creasing her face. “Prior to starting, I was a ride-along for four weeks and absolutely loved it. I’ve always loved coaching, but this fills the void. Good gracious, look at me — I’m trying to become a fireman at age 41. Talk about a midlife crisis.”

It all looks good on Gantt, but that’s the view when you’re standing on third base and smiling at the world.