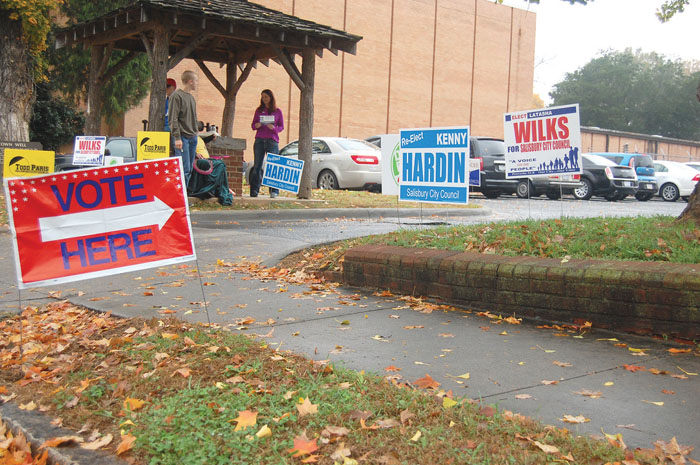 Precinct volunteers wait to give voters information at the headquarters of Rowan Public Library — one of approximately 10 polling places around Salisbury — on Nov. 7. Jessica Coates/Salisbury Post

SALISBURY — As of approximately 2 p.m., the headquarters of Rowan Public Library — one of the approximately 10 polling places in Salisbury — had 124 voters come through.

The chief judge for the precinct, George Jones, said that 124 was on par with the number of voters expected, based on the 2015 municipal election results.

“But it’s not a good showing, that’s for sure. I’d like to see a lot more,” Jones said.

This is Jones’ first year as a polling precinct judge.

He said based on previous elections, the Board of Elections expected about 10 percent of his precinct to vote over the course of both early voting and election day.

“And so we’re on track — actually a little above ours. But the hope would be that there would be a whole lot more. I mean, particularly with all that’s going on in the world and the divisiveness that’s going on between the parties, you would expect to see more people interested in voting and getting out there and trying to make the system better,” Jones said.

One of the 124 voters who came to the library’s headquarters at 201 W. Fisher St. to vote was Marietta Johnson.

“I think we have some good candidates and I think there will be some change. And I’m optimistic,” Johnson said.

Since Johnson moved to Salisbury in 2014, she has voted in three or four elections. She said that when she was out of town for the 2016 presidential election, she voted by absentee ballot.

Salisbury City Council to discuss role of committee in…