How a so-so cake became a breakfast delight 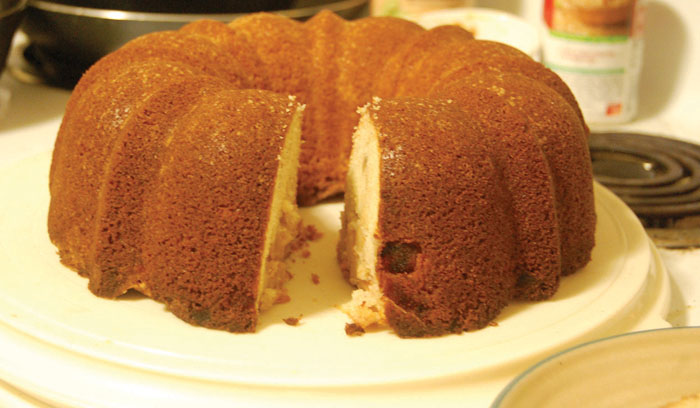 Deirdre Parker Smith/Salisbury Post This year's version of apple cake was just so-so, but it made an awesome bread pudding.

It was going to be the annual apple story, but the recipe we chose for an apple cake, one of our favorite things each fall, was a bit disappointing.

In the past, our apple cake batter was dark with a variety of spices and the cake was rich and delicious. As soon as we finished it, we wanted to make a new one.

Well, we ended up trying a different recipe. The batter was a cheery yellow, and instead of spicing the batter, the recipe called for tossing the spices with the apples.

Spice. Cinnamon. The instructions were to do a layer of batter, a layer of chopped apples, more batter, then another layer of apples, then the rest of the batter, so the apples would be throughout the cake.

But when we cut into it, pretty much every single piece of apple had sunk to the bottom, giving us the dreaded soggy bottom, and a bland cake above.

So, it sat around for a few days. We had a slice here and there; it was a nice ending to a savory meal.

Then we took it with us to visit a friend up in the mountains and came up with the idea that that cake would make good French toast or bread pudding.

We used a Betty Crocker bread pudding recipe, modifying it to go with the cake. For one thing, we cut the sugar down from 1/2 cup to about 2 Tbsp. If our friend had had nutmeg in her cabinet, we would have added that, too, but we stuck to cinnamon, and we added a healthy teaspoon of pure vanilla extract to the custard.

We sliced the cake, poured the custard over it, baked it and served it with crispy bacon for breakfast. Our friend asked us to write down what we did.

Well, first we made an apple cake …

Our constant apple success every fall and winter is apple sauce. Using a variety of apples, more tart than sweet, we cook the apples down with butter, vanilla, cinnamon, nutmeg and a touch of clove. To ensure it’s a nice consistency, we add apple cider, orange juice, cranberry juice and/or a touch of alcohol, such as a bit of bourbon or whiskey.

It’s fantastic with any kind of meat, pork especially, or you could pour it over a warm biscuit for breakfast or add a little vanilla ice cream for dessert.

So, if you’re looking for a simple apple cake with ingredients you already have, try this one from allrecipes.com

Preheat oven to 350 degrees. Grease and flour a 10-inch Bundt or tube pan. In a medium bowl, combine the diced apples, 1 Tbsp. sugar and 1 tsp. cinnamon; set aside.

Sift together the flour, baking powder and salt; set aside.

Pour one-third of the batter into the prepared pan. Sprinkle with half of the apple mixture. Alternate laters of batter and filling, ending with batter.

Bake in preheated oven for 55-60 minutes, or until the top springs back when lightly touched. Let cool in pan 10 minutes, then turn out onto a wire rack and cool completely. Sprinkle with 1/4 cup confectioners sugar if desired.

When reading the reviews online, nearly everyone modified the cake in some way, some changing the recipe almost completely.

If you just want a nice, easy apple cake, I would add cinnamon and nutmeg to the batter, and consider using half brown sugar and half white sugar. The brown sugar adds depth of flavor and will make the crust a bit crispy.

Heat oven to 350 degrees. Spray a 2-quart baking dish, round or square. Slice apple cake into half-inch slices and place in pan so that each slice is slightly upright, leaning on the slice below.

In a 2 quart saucepan, heat milk, half n half and butter over medium heat until butter is melted and milk is hot. Do not allow to boil.

In a large bowl, mix eggs, sugar, cinnamon, salt and vanilla. Pour over the cake slices in the pan.

Bake uncovered 45-50 minutes or until a knife inserted one inch from the edge comes out clean.

Serve with ample syrup, if desired, or just serve as is with a side of bacon for a decadent breakfast.

You could use this bread pudding recipe with any pound cake or quick bread. Pumpkin bread would be delicious, or banana bread, just adjust the amount of sugar in the custard. You don’t need a super sweet custard if the bread is already sweet. You could also use a loaf of cinnamon swirl or cinnamon raisin bread.

This is a super easy and very tasty weeknight meal. We’re going to combine prok chops with apples, sear the chops and finish the dish in the oven.

2 tart apples, such as Granny Smith

Slice or dice apples and sprinkle with cinnamon and nutmeg, set aside. Slice onion and set aside.

Season both sides of pork chops with thyme, sage, salt and pepper. Heat olive oil in a large, ovenproof skillet and brown pork chops on both sides, adding onions halfway through to soften.

When cops have browned, sprinkle apples over the pork chops and dot with the butter. place in oven, uncovered for 15-20 minutes, depending on the thickness of the chop. For thicker chops, it may take up to 30 minutes to reach an internal temperature of 160 degrees for medium.

Serve with green beans and some cauliflower rice (available in frozen food sections).