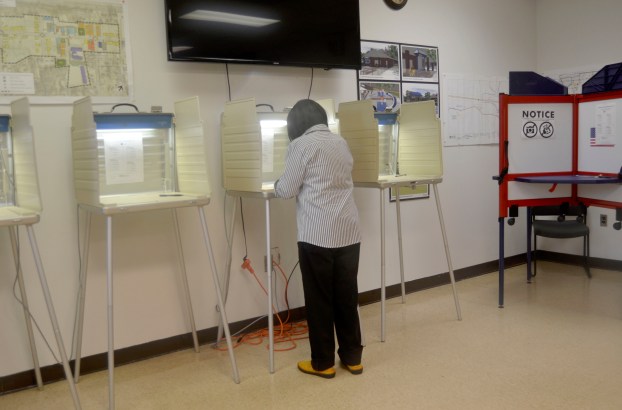 Dwayne Holmes, left, who is running for town board, talks with voter Erick Neely at the East Spencer voter precinct on Tuesday. In the background are left, Phronice Johnson and Mayor Barbara Mallett. Candidates Teon Robinson and Otis Gibson, not shown, were also at the precinct. Shavonne Walker/Salisbury Post

EAST SPENCER — Lillie Bell McCluney sat on the passenger’s side of the car waiting to vote in Tuesday’s East Spencer municipal election, one of many she’s proud to have voted in, she said.

McCluney, 91, has voted in every election — presidential and municipal — since the election of John F. Kennedy, she said.

She said she cast her vote for Mayor Barbara Mallett, who is running for re-election because of her knowledge and experience.

Brenda Kelley rode with her brother, James Kaiser, to vote Tuesday. The most important reason Kelley said she voted in the municipal election was because she wants to see improvements made in the town. The East Spencer native said she voted for the people whom she felt were capable.

As of 12:20 p.m., Chief Election Judge Andrea Kirk said 104 people had voted at that point, which was more people than during the last municipal election around the same time.

“It’s been kind of busy and pretty steady,” Kirk said of turnout.

Erick Neely said it’s great to vote during the presidential election, but the city elections are what impact residents locally.

“The city is where you get your information from; it’s very important to support your city,” Neely said.

The local businessman stands behind Tony Hillian, who is a supporter of his barber shop business, and he believes in the issues that Hillian stands on, Neely said.

He appreciates meeting with all of the candidates one-on-one during this campaign season because it has given him a chance to learn in-depth about their individual platforms.

Staff report The Post has an updated list of polling places for Election Day — Tuesday, Nov. 7. The following... read more