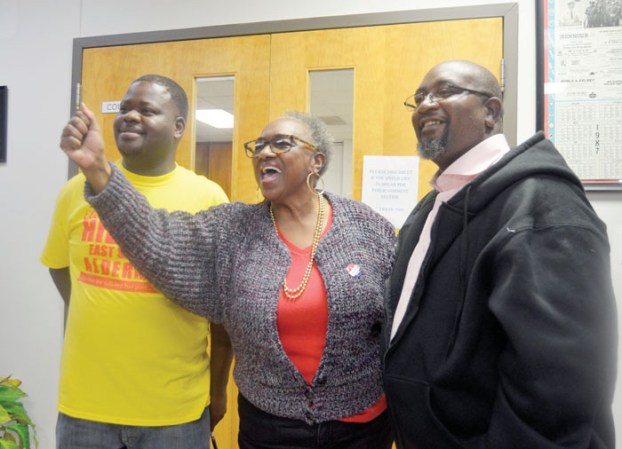 East Spencer Mayor Barbara Mallett celebrates her win as she makes a return to the board along with newcomers Tony Hillian, left, and Douglas "Dwayne" Holmes, both of whom received the top votes as aldermen. The three pose for pictures from friends and family. Alderman Otis Gibson, not pictured, also returns to the board. Shavonne Walker/Salisbury Post

EAST SPENCER — Only one of three East Spencer aldermen will return to the board. With him, Mayor Barbara Mallett keeps her seat in a landslide victory.

Retired educator Otis Gibson will return to the board and newcomers Tony Hillian and Dwayne Holmes will join him, according to results from Tuesday’s election. Incumbents Tammy Corpening and Phronice Johnson trailed.

Dwayne Holmes received 181 votes or 23.82 percent. Tony Hillian came in right behind Holmes with 21.58 percent or 164 votes. Jamilla Kennedy, who ran for office for the first time, received 85 votes or 11.18 percent.

“It was a well-run election. The people have spoken,” Mallett said.

She said her numbers show that the people of East Spencer believe in her.

Robinson, who is a firefighter with the East Spencer Fire Department, said this is not the last voters will see of him. He has plans to run again in two years.

“We ran a great campaign. The pressure is still on for the board,” he said.

Robinson said he hopes to still be involved in town government by serving on a board or committee. He thanked his campaign managers, Ryan Stowe and Le’Andre Blakeney.

He said it’s still important to hold the board accountable.

Robinson said he’s happy that some change did come to the board with the wins by Hillian and Holmes.

Holmes said his ultimate goal is to please the people of East Spencer.

He also thanked his campaign manager, Kelly Taylor, who spent the day campaigning with him and joined him at the precinct to hear the results.

Holmes compared his campaign to the Carolina Panthers mantra — “Keep Pounding.” He said he just kept pounding with face-to-face interaction with voters. He sent his congratulations to the others who won.

He said he was still in shock at the results that showed him with the highest number of votes among the top three contenders.

Hillian said he is grateful to his family and friends for their support throughout the campaign. He said he just left the decision up to the voters.

“I know my grandmother, Essie Mae Foxx, is smiling down on me,” he said.

“It’s time to get to work. People are tired of the talking. It’s time for doing,” Hillian said.

Foxx, who was a pillar to the town of East Spencer and a longtime advocate of youth and community activities, died in May 2016.

Hillian, who was surrounded by family at the election precinct, said he wanted to thank his campaign manager, Esther Atkins-Smith.

“I’m happy for all the candidates. It was a fun experience. I plan to return again,” said Kennedy.

Corpening said she wishes those who were elected good luck. She noted the low voter turnout in the East Spencer race as well as all of Rowan County.

“It’s sad that not that many people went out to vote. I wish everyone well,” she said.

As of 1:55 p.m., 193 people have voted in the Landis municipal election. The candidates for the Board of Alderman... read more