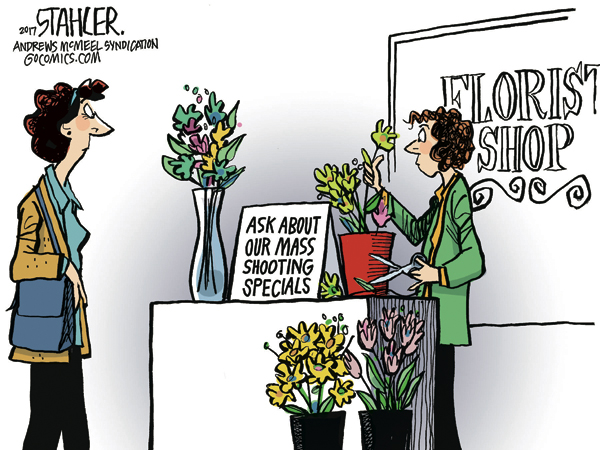 Darts & laurels: Are we so powerless? A law enforcement official investigates the scene of a shooting at the First Baptist Church of Sutherland Springs, Monday.
(AP Photo/Eric Gay) Dart to the crimes that have come to be identified as a largely American phenomenon — mass shootings. Whether the culprit is too-easy access to guns or proliferation of untreated mental illness, neither reflects well on the United States. A man gunned down dozens of defenseless churchgoers in Texas on Sunday, killing 26 in a horrific attack outdone only by the country’s powerlessness to stop mass carnage. This time President Donald Trump found himself commenting on a U.S. mass murder as he stood alongside the prime minister of Japan, a country where mass killings are relatively rare. If, as Trump said, people with mental illness are the problem, shouldn’t the nation do all it can to keep guns out of their hands?

Laurels to an important lesson that Salisbury Police Chief Jerry Stokes said he learned from last year’s officer-involved shooting — make sure officers wear body cameras. The killing of Ferguson Laurent Jr. during the serving of a search warrant last November spurred community turmoil and a long SBI investigation. Stokes came away convinced that footage from body cameras would have been useful. “I may have been able to quell some of the concerns I couldn’t answer,” Stokes said recently. The City Council has OK’d buying a new body camera system for police. This is a positive step.

Dart to the dangers of texting while driving or walking. Since even the days of bag phones — remember those? — safety experts have lamented the distractions of using phones while driving, and texting seemed to increase the danger exponentially. Drivers in North Carolina are banned from texting while their vehicle is in motion. Now the risks of distracted walking have come to the fore. Last month, Honolulu became the first major American city to make it illegal to text while crossing the street. In fact, the city made it a crime to look down at any electronic advice in that situation. Four years ago, a study found that more than 1,500 pedestrians were treated in hospitals for injuries related to walking with a mobile device, Newsweek reports, but most of them weren’t texting. The study found that 69.5 percent of those who were hurt were talking on the phone. Maybe smartphones need collision warning systems.

Editorial: Don’t be silent in this election

People died to secure and protect our right to vote in the United States. Be sure you exercise that hard-won... read more