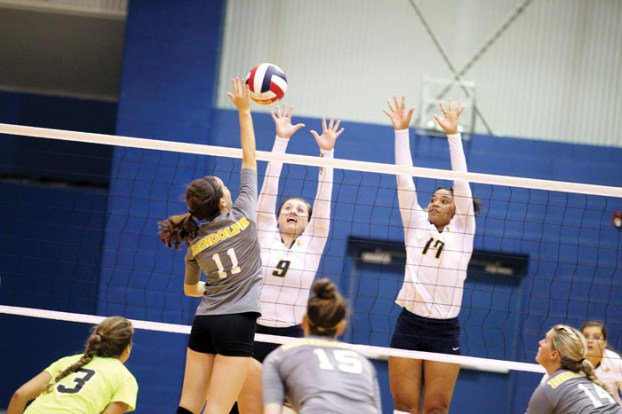 DANVILLE, Va. — Senior Lynsey Corriher’s volleyball career ended off the court at 12:30 p.m. on Monday when the Division III regional pairings were announced and the Averett University Cougars weren’t included.

Averett was ranked sixth in last week’s South Regional voting, but it dropped out of the top eight after losing on Saturday to Covenant College (Ga.) in five sets in the USA South Conference Tournament championship game played in Averett’s gym. Covenant got the league’s automatic berth.

Averett beat Covenant and went undefeated in conference play during the regular season, but now it’s over.

“We played some tough non-conference games this year — Johns Hopkins, Randolph-Macon, Washington & Lee — as preparation,” Corriher said. “If you don’t win the tournament, you still want to be able to make the playoffs as an at-large team.”

But the Cougars fell short. The good news is that Corriher, a South Rowan graduate, will get to suit up one last time when Averett travels to Costa Rica for a series of exhibition games in January.

“It’s coming to an end, but it’s not quite over,” Corriher said.

Corriher had a nice career at Averett, a remarkable one, really, for someone who took up volleyball so late.

She was basketball 24/7 as a youngster, but when she got to high school, Jan Dowling, now at West Rowan, was coaching South’s volleyball team. Corriher and Dowling are related, and Corriher wanted to play for her.  Corriher proved to be a natural. She showed enough potential that she made the varsity squad as a freshman.

“Growing up, I’d always thought I’d be a college basketball player,” Corriher said. “But I wanted to try volleyball. I’m glad I did.”

Corriher also made South’s varsity basketball team as a freshman.

By her sophomore season, Corriher was all-county in volleyball and she’d started playing volleyball with a Junior Olympic program. She also was a basketball starter as a sophomore, scoring 16 points against East Rowan and 17 against North Rowan.

“That was a life-changing injury and surgery,” Corriher said. “It was like learning to walk all over again. And having to sit and watch was the hardest thing I’ve ever had to do.”

She tackled the rehab with gusto and made it back for her senior volleyball season. Less than eight months after surgery she was back on the court. She was stiff and sore, but she also was team captain, team MVP and all-county. Her last high school game may have been her best. She pounded 15 kills against East Rowan.

Her last high school basketball season also was successful. She was South’s only senior, but her post defense and rebounding were a large part of coach Jarrod Smith’s Raiders winning 18 games, including two in the 3A state playoffs.

Corriher was a 5-foot-9 post player, so college basketball wasn’t really an option. She was either going to UNC Wilmington as a normal student or to a small school where she could continue to play volleyball.

A visit to UNC Wilmington ruled that out. It was too big. She felt lost.

Corriher ended up at Averett because of Nicole Barringer, the South Rowan setter who had become one of the best in Averett history. Corriher and Barringer were three years apart at South, but they’d been teammates when Barringer was a senior and Corriher was a freshman. Barringer told Averett head volleyball coach Danny Miller about Corriher. That led to emails, Corriher’s visit to the school in Danville, Va., and a tryout. Averett had about the same number of students as South Rowan and was a perfect fit.

Corriher’s combination of athletics and academics earned her a Presidential Scholarship at Averett. That meant $14,000 annually.

But there were adjustments to be made to college sports and the ACL injury had cost Corriher vertical leap and lateral quickness that were slow to return.

She had a limited role as a freshman. Then her sophomore year was a disaster. She didn’t get on the court at all.

“Some injury issues, but mostly it was due to a concussion,” Corriher said. “I was still traveling with the team and putting in a lot of time, so it was really difficult being on the sideline. I wouldn’t say I came close to giving up, but it was very frustrating.”

Corriher came back strong as a junior, mostly in a defensive role. She contributed 136 digs and 34 kills to an Averett team that went 26-10 but lost to Meredith in the USA South Tournament championship game.

“There was a point where I wasn’t doing much at all,” Corriher said. “Finally, I just told myself to play like every game might be my last one. Why not leave it all out there?”

Once she started leaving it out there, Corriher started getting great results in the role of Averett’s right side hitter.

On Oct. 20, Averett was taking on Meredith on a neutral site in Winston-Salem.

“We always seem to go five sets with Meredith,” Corriher said. “They’re our biggest rival, and those matches are always intense. I probably had my best college game against Meredith this year. We beat them, and everyone was dog-piling and then everyone was crying because we’d won the conference again. After the match, they told me I had (a career-high) 16 kills, and that was amazing. I had no idea.”

“It was nice, a big crowd, and even my brother (Cameron) who goes to N.C. State came to see me,” Corriher said. “But it didn’t really hit me very hard. It wasn’t like a normal Senior Night because I knew we’d still be back playing in our gym in the conference tournament.”

Corriher played well in that conference tournament. She had 25 kills in Averett’s three matches. Seven came in the loss to Covenant that crumpled Averett’s season.

Corriher’s senior season was her best. She accumulated 165 kills (fourth on the team), 58 digs and 38 block assists.

Averett was expected to be good, but the Cougars exceeded projections in Corriher’s last year. She was a big part of that.

Corriher’s impressive-sounding major is biomedical sciences. She’s taken lots of biology and chemistry classes, so she got used to taking her textbooks on the road trips. She’ll graduate on schedule this spring. After that, she hopes to be accepted into a graduate program where she can pursue a Master of Science in Occupational Therapy degree.

Corriher has given a lot to volleyball, but it’s also given her a lot back.