College football: Like Walker, Peppers is a coach on the field 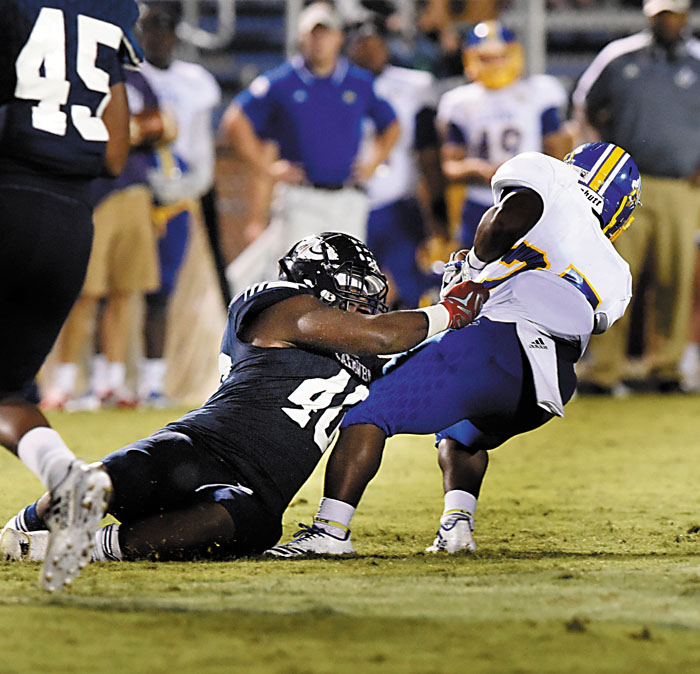 His mother, Takoma, worked as a business officer at Clemson for a large chunk of Michael’s life, although she was promoted to budget analyst at the university in June, a few months before he began his senior year at Catawba College.

“Sure, I dreamed of going to Clemson, and a lot of my high school teammates did go on to Clemson,” Peppers said. “To this day, I’m a Clemson fan. I’ll always follow Clemson football.”

Peppers played for the Daniel High Lions on talented, tradition-rich teams. Houston Texans receiver DeAndre Hopkins and Kansas City Chiefs defensive end Jarvis Jenkins are just two of the Lions who made it to the NFL.

The Lions shut out five opponents and went 14-1 in the fall of 2013, Peppers’ senior year. They lost in the 3A state final to Myrtle Beach, 24-21, at the University of South Carolina’s  Williams-Brice Stadium.

Peppers played on a defensive unit with Solomon Brown, who would become an All-American at Charleston Southern. He also played next to the Davis twins, J.D. and Judah. They were the sons of Jeff Davis, captain of Clemson’s 1981 national champions and now an assistant athletic director at Clemson.

It’s hard to believe there was anyone left over for Peppers to tackle, but he still found plenty of people to hit. Peppers made 262 tackles in high school, 43 for loss. He was all-region three times and played in the North-South All-Star Game.

Four of Peppers’ teammates, including the Davis twins, announced their intentions of moving on to Clemson on National Signing Day, although running back Jae’lon Oglesby, a Shrine Bowler and one of the state’s best prospects, wound up at Fork Union Military Academy before signing with Memphis.

The only flaw anyone could find in Peppers’ game was that he was 6 feet tall. That lack of ideal height led to a quiet signing with Division II Catawba, which had been in contact with him since his junior season. Catawba head coach Curtis Walker personally made a visit to Daniel High to recruit Peppers.

“He spent an hour and a half one day with me,” Peppers said. “That’s when I knew I wanted to go to Catawba and play for him. He didn’t just talk about Catawba football. He talked about life. We talked about what I was going to do after I graduated from Catawba.”

As a true freshman in 2014,  Peppers became a starter. That was in the fourth game of the season against Carson-Newman at Shuford Stadium. He’s been out there every game since then. Saturday’s win against Newberry marked the 41st consecutive start for Peppers.

At 225 pounds, Peppers brings more smash than flash. He’s not going to fly around for sacks and interceptions. But he’s always around the ball. He sticks his nose in and puts people on the ground. If you’re going to try to run the ball against Catawba, you’re going to see a lot of No. 40.

“When I played linebacker at Catawba, they said I was like a coach on the field,” Walker said. “Now Peppers is that coach on the field for us. He’s solid. He’s dependable. He’s durable. He understands the tendencies of the other team. He understands the game so well. He’s always in the right place and he helps get his teammates in the right place.”

Peppers’ career goal, not surprisingly, is to be a football coach. He aspires to be a defensive coordinator in the college ranks.

“I’ve always loved the game and studied the game,” Peppers said. “I’ve known for a long time that’s what I wanted to do.”

Catawba found itself in a weirdly challenging game on Saturday against Newberry. Both Newberry quarterbacks got hurt, and the Wolves’ offense was being operated by either a running back, a receiver or a tight end, and often they were just taking off with it. When the ball is being snapped directly to the guy who is running it, it changes the numbers, there’s an extra blocker, and Catawba had to make adjustments.

Peppers was a rock. He made three stops in the Newberry backfield. He was even better than normal.

“Peppers was really moving, moving to his left, moving to his right,” All-America linebacker Kyle Kitchens said with a laugh. “I don’t what happened to him.”

Peppers left the field feeling he hadn’t performed at his best. But Monday’s film session swayed  his thinking.

“I thought I just played OK,” Peppers said. “But then when I saw the film, yes, I did play pretty well. We did a good job of taking the outside away from them. We forced them back in and then we made the plays.”

Peppers (seven tackles, one QB hurry) was productive enough that he named Catawba’s defensive player of the week.

“I think he probably played the best game he’s ever played for us, and that’s saying something,” Walker said. “A lot of nice tackles.”

Peppers has actually hit even more people in college than he did in high school. His tackle tally at Catawba is now at 268. He’s not far from being in the school’s all-time top 10.

As was the case in high school, Peppers plays next to higher profile people. Catawba linebackers Kitchens and Trey Evans were both first team All-South Atlantic Conference last season, and deservedly so, while another linebacker Jamal Lackey, a senior in 2016, was second team All-SAC. Peppers was the only one of the four starting  linebackers not to receive accolades.

It’s difficult to get recognition for everyone, but Walker is sure to push as hard as he can for Kitchens, Evans —  and Peppers —for the All-SAC teams.

Catawba is ranked sixth in the region, but a lot would have to happen for Catawba to move up to No. 4 and get a home game in the playoffs. In all likelihood, Saturday’s game will mark the final home appearance for Kitchens, Evans, Peppers, star receivers Keyon West and Sam Mobley, quarterback Patrick O’Brien and nine of their teammates.

So the goal is going to be win and at least retain that No. 6 spot. With a loss, the season is almost certain to come to an abrupt end.

“This has been our home for four years, so  it’s going to be an emotional day,” Peppers said. “Lenoir-Rhyne is our rival. They want to spoil our season.”