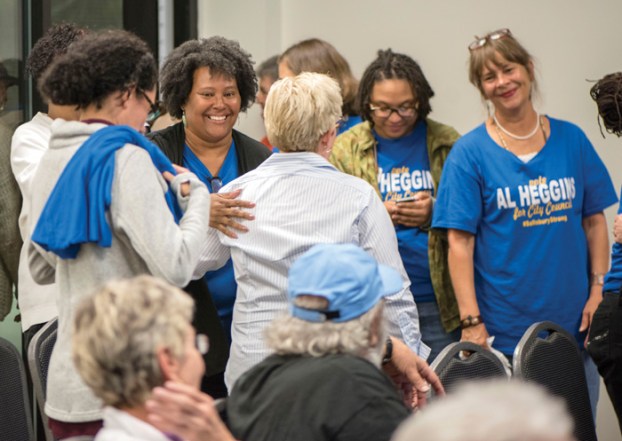 SALISBURY — With 2,152 votes — or 12.38 percent of the total — challenger Al Heggins received the highest number of votes for Salisbury City Council on Tuesday.

“We’re going to work together to write our next new chapter,” Heggins said through tears. “We have great things ahead of us as a community, working together, and that’s what our strength is.”

Incumbent Councilman Kenny Hardin lost his bid for re-election, coming in seventh in the 13-candidate field.

He said he’s looking forward to tackling issues like the future of Fibrant, getting a seven-person City Council and helping schools in more ways than just “providing a little bit of money to Knox every year.” Alexander came in third place with 1,768 votes, or 10.17 percent. She said she felt “wonderful” and that she is looking forward to “opportunities to continue serving citizens.”

“I’ve put the work in for six years and, by not getting a seat in 2015, it’s made me rededicate myself to this city. I’ll never give up on this city. So I’m glad to get to do the work,” Sheffield said.

“It’s great. It’s a lot of work for one night, but it worked out well,” Miller said.

He said the thing about this campaign season that stood out most to him was how respectful candidates were to each other.

“Salisbury picked who it needs to lead it. But I’m still going to be here. Salisbury comes first,” Ricks said.

Hardin was next with 1,478 votes, or 8.5 percent. He said he is “100 percent good” with the result and that this might be a good time for him to take a step back from public life.

“I enjoyed my time on the council and making an impact, but it’s time to allow this new council to forge their identity,” Hardin said.

“I don’t think of it as a loss; it’s just that I didn’t get elected,” Struzick said. “You know, I had a good run, and for my first endeavor into politics, I think I had a fairly good showing.”

Latasha Wilks finished with 951 votes, or 5.47 percent. Wilks could not be reached for comment after the final results came in.

“I am so fine because I see some new blood going on the council and that’s good,” Belk said.

She said she hopes the new council will recruit jobs with good wages and “turn that big ship called Fibrant around.”

“I don’t have to be elected to win,” Paris said. “I’m just saying there are some wonderful things for Salisbury from these results.”

He said he’ll continue “influencing the public decision-making process any way I can.”

“My whole objective in running was to get five good people on City Council, and I believe that goal has been accomplished,” Queen said.

Ryan Evans came in last with 363 votes, or 0.31 percent. He said he believes he can learn from the winners and “take notes” about how they campaigned.

“I just want to see the youth, find something for them to do. Keep them out of the streets,” Evans said.

He also said that he “appreciates everybody.”

By Jessica Coates jessica.coates@salisburypost.com SALISBURY — As of approximately 2 p.m., the headquarters of Rowan Public Library — one of the... read more