Through music, support, Voices of Hope event helps with the healing 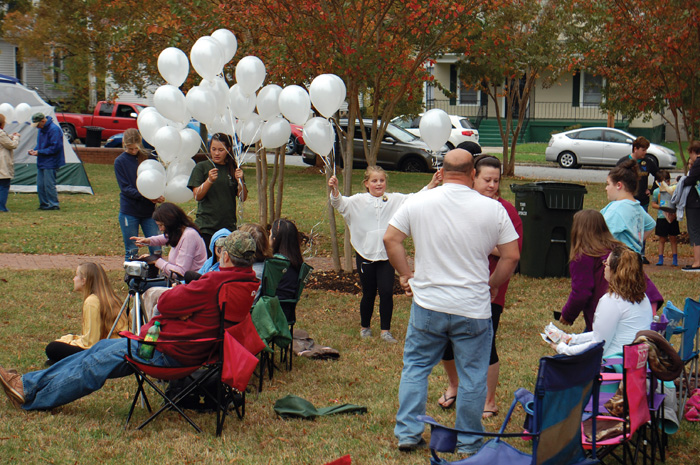 Mark Wineka/Salisbury Post Balloons are passed out in the Voices of Hope crowd prior to their release at the event's finish.

SPENCER — Sunday was All Saints Day and a birthday for Tanner Pierson.

Tanner died two days into his life 17 years ago, but Renee Pierson never allows his birthday to pass without making a cake and visiting his gravesite at City Memorial Park. It just so happened Sunday she could travel from the cemetery to the Voices of Hope concert at Library Park — something she never misses.

Parents and others left behind develop their own ways of coping after a child dies, but for 16 years now Voices of Hope has celebrated the lives lost, while also offering some collective healing through music.

Angelina actually made Tanner’s birthday cake Saturday night, and the family left a slice at the cemetery Sunday. In the park, as the concert came to a close, the Pierson family waited for Tanner’s name to be called out.

When it came, they released their white balloons to the sky in his memory.

“They love him and like doing things for him,” Renee said of Cameron and Angelina. “He has really touched their lives, though they never met him.”

Voices of Hope began in 2002, a year after Lori and Steve Yang’s son Michael died when he was 23 months.

The annual afternoon of singers/musicians, food, games, socializing, door prizes and a traditional balloon release at the end goes to support the Michael Yang Foundation. The foundation supports many things such as Kindermusik, college and camp scholarships.

But maybe its biggest outreach is the Circle of Hope support network created for bereaved parents — something the Yangs saw a glaring need for when they were trying to cope with Michael’s death.

Circle of Hope meets at 7 p.m. on the second Thursday of each month at Steve Yang’s dental office, 2290 Statesville Blvd. But many other individual or group counseling sessions for parents are available beyond the regular Circle of Hope meetings.

Renee Pierson has helped through the years with parents, such as her, who are trying to deal emotionally with the loss of a baby. And many other bereaved parents who turn to Circle of Hope for help become important support systems themselves later.

“It’s a meaningful event for us,” Steve said.

Lori said the Voices of Hope gathering gives her a chance to see many of the Circle of Hope participants, recognize “how far we’ve all come” and hear testimonies on how Circle of Hope has worked.

Every year, Lori’s grandmother, Dot Honeycutt, hand sews a quilt that’s given away as one of the top door prizes.

“And I’ve got a couple stored back for when I’m not here,” Honeycutt said Sunday. She also has never missed a Voices of Hope event.

Abby Robinette flew back home from her freshman year at the Belmont University School of Music in Nashville, Tennessee, to sing at Voices of Hope — something she has been doing since the eighth grade.

Robinette returned to Nashville Sunday night. She sang three songs in Spencer with the help of mentor Blaine Smith on the guitar. Robinette said she sang for the first time at Voices of Hope after her younger brother had lost one of his best friends, Lillie Edwards.

She has not missed singing at a concert since.

Robinette, who is majoring in music therapy and commercial music performance, said music can offer a sense of peace and healing for everyone.

“I really believe music can do a lot and change a lot,” she said. “It’s a whole other language, really.”

Behind the performers was a continuous slide show 0f 71 photographs of children, whose names were among the many also spoken during the balloon release.

Roger Campbell, speaking on behalf of BRAKES (Be Responsible and Keep Everyone Safe) told of the nonprofit’s efforts — through professional racers — to save lives by educating and training teenage drivers. The program is an advanced car control school for teens 15 to 19.

At the end of the two hours of performances, Lori Yang read from two pages — each four columns wide —  of names and spirits to be remembered. The names also were scrolled on the screen.

Some 150 balloons went skyward this year with names tied to many of them.

This year, Michael Yang would have been a high school senior.

His parents will never forget Michael and will forever be thinking of various benchmarks in life he would have been experiencing.

It’s what parents do.

Tanner Pierson probably would have had his driver’s license and be talking about visiting colleges, Renee said.

“I always think about what he would be doing,” she said.