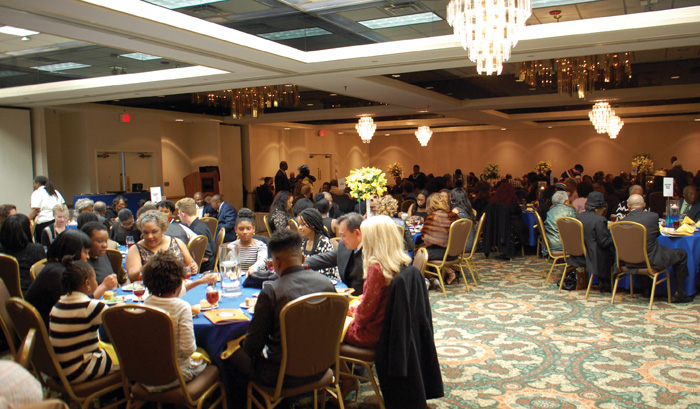 SALISBURY — The Salisbury-Rowan Branch of the NAACP’s Freedom Fund Banquet took place Saturday night on the eve of one of the more important Salisbury City Council elections in many years.

Many incumbents and challengers in the race populated the banquet room, Of 13 candidates for City Council Tuesday, five are African American in a city that, as one speaker pointed out, is now 53 percent black or brown.

Yolanda Woods, second vice president of the Salisbury-Rowan Branch, said voting for blacks was a right borne of much struggle.

“We have been through too much to be lax about voting,” she said.

Leanese Woods, secretary for the branch, urged each person in Saturday night’s crowd to vote Tuesday, “and take four people with you.”

The 23rd Annual Freedom Fund Banquet was held at the Livingstone College School of Hospitality and Culinary Arts. The Salisbury-Rowan branch was founded in 1979, and the NAACP as a national organization goes back to 1909.

The stated vision of the National Association for the Advancement of Colored People “is to ensure a society in which all individuals have equal rights and there is no racial hatred or racial discrimination.”

Much of the evening was devoted to dinner, music and community awards. Theo Chunn, an academic success counselor and coordinator of the Freshman Male Initiative at Winston-Salem State University, was the guest speaker.

Another special guest was Amos McClorey, a state NAACP district deputy, who said Salisbury-Rowan Branch President Gemale Black is looked on as a rising star in NAACP circles.

McClorey said Black is recognized as the strongest, youngest president in the state.

“You have a good leader in Salisbury,” McClorey said, “so embrace him, because the state of North Carolina has.”

The oft-repeated theme during the banquet was straightforward, as expressed by mistress of ceremony, Robin J. Whitehurst, and other speakers: “Steadfast and Immovable: Every Generation Has Its Moment. This Is Ours.”

Ryan Stowe said when he drives around Salisbury, “I can hear the community crying for help,” whether it be about crime, poverty, education or even discussion about the relevancy of historically black colleges.

“We must live up to the urgency of now,” Stowe said.

Chunn’s motivational message emphasized the need to take stock in one’s self and waking up dreams and aspirations dormant for too long.

“When was the last time you had a meeting with yourself?” Chunn asked.

Chunn has been a motivational speaker since 2007, often talking to professional groups, along with college and high school students. At WSSU, he conducts a monthly motivational seminar for staff members.

Too many times, Chunn said, people do not own up to the things they think or say.

“You are the owner of you,” he told his audience.

Chunn said it’s important when doing anything — walking, sleeping, meeting — to do it with a purpose. He also told his listeners not to limit themselves.

“You become the solution,” he said. “Sit down, talk to yourself. if you motivate yourself, guess what — the world will be a better place.”

Chunn spoke of his farmer grandfather from Arkansas who had a limited education but still accomplished things and how the family benefits from his hard work today, though he is no longer living.

Often, as a way to keep himself accountable, Chunn will ask out loud, “Grandfather, did I make you happy today?”

“Every day is a chance to wake up again and make them (your ancestors) happier,” Chunn added.

Black said in his banquet greetings the awards handed out Saturday night were meant to recognize people who exemplified the spirit of the NAACP “by going in the community and giving others the opportunity to be the best they can be.”

Two posthumous awards went to the Rev. Dr. Clary L. Phelps Jr. and William C. Peoples Jr. Family members for each of the community leaders were present to accept the recognitions.

Black gave his President’s Award to Christopher McNeil and appreciation plaques to the city of Salisbury and Food Lion, who were among the corporate sponsors for the event. City Manager Lane Bailey accepted on behalf of Salisbury.

“I realize we have challenges in this community,” Bailey said, “but I think together we can make things better.”