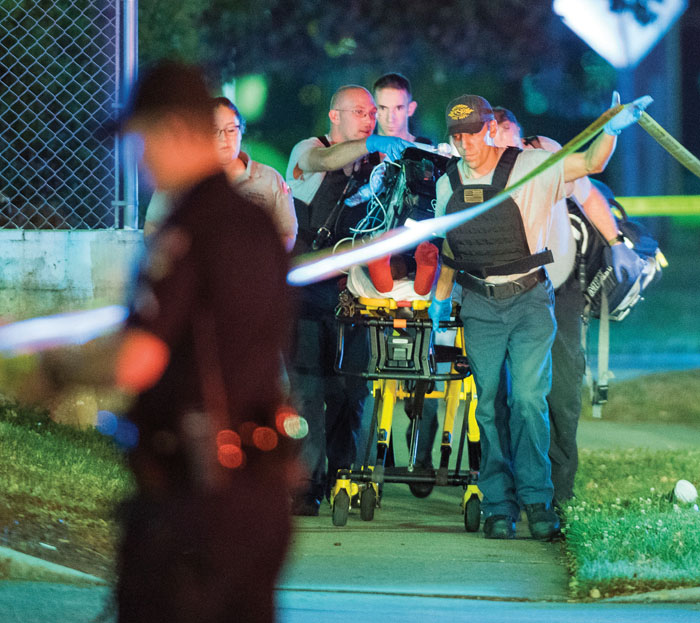 A shooting victim is taken to an ambulance outside Taco Bell in Salisbury Friday night. He later died at the hospital. Jon C. Lakey/Salisbury Post

SALISBURY — Deshawn Patrick Clark, 30, of Salisbury, was the man who was shot to death Friday night in the Taco Bell parking lot at 510 E. Innes St., Salisbury police said Monday.

Investigators and the State Bureau of Investigation are continuing to work on the homicide, which was reported at 8:44 p.m. Friday. Shots also hit several vehicles in the vicinity.

“It doesn’t appear to be related or retaliation to any other homicides we’ve had,” said police Capt. Shelia Lingle.

The shooting was not random, she said. Clark and the suspect had an altercation before the shooting on the same day, she said.

“He knew the person,” Lingle added.

After the gunfire, the victim ran into a neighboring tobacco shop and collapsed, witnesses said. He was transported to Novant Health Rowan Medical Center, where he died later Friday night.

Lingle said both Clark and the suspect were outside vehicles when the shooting took place. The incident was not a drive-by shooting, she said.

Tips may be submitted online at http://tips.salisburyrowancrimestoppers.org.