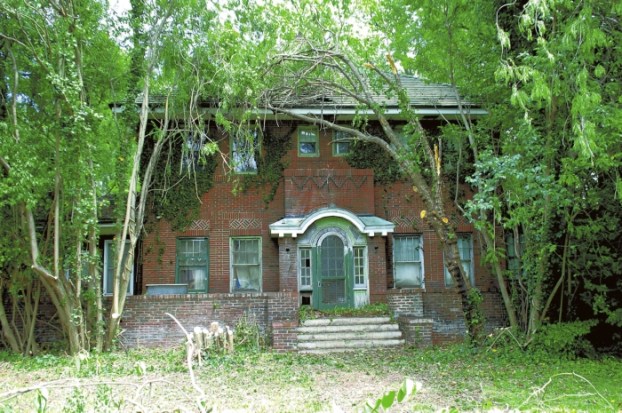 A work crew from Historic Salisbury Foundation spent a morning cutting through the vegetation that had covered this house at 128 W. Thomas St. in May 2016. Mark Wineka/Salisbury Post Ivy and other vegetation cover the front entrance to the 1922 house at 128 W. Thomas St. Mark Wineka/Salisbury Post

The foundation said Monday that it sold the McCanless-Busby-Thompson House to Pier & Curtain Home Restoration LLC, a North Carolina company specializing in the renovation of historic houses in older neighborhoods. The corporation bought the house from the foundation on Oct. 26.

The principals of Pier & Curtain Home Restoration, Dylan and Taylor Ellerbee, moved to Salisbury from Durham a year ago, according to a news release from Historic Salisbury Foundation. An advertisement posted by local Realtor Greg Rapp in a national publication drew the Ellerbees’ interest to Salisbury.

“Salisbury’s dedication to historic preservation is rightfully recognized across the country,” said Dylan Ellerbee. “The number of preserved, historic homes in Salisbury is incredibly impressive for a town of its size. Within hours of seeing Salisbury for the first time, we knew it was a perfect fit for us.”

The Ellerbees learned about the McCanless-Busby-Thompson House in mid-2016 and began working with Rapp and the HSF to acquire it.

Many people assumed the Colonial Revival house, which the foundation worked on last year to uncover from overgrown vegetation, was beyond saving. A Post headline referred to it as “the house that disappeared.”

The foundation had a different view, one shared by the Ellerbees. It took more than a year to accomplish, but they now own it.

The foundation purchased the house from John M. Cheek on Sept. 24, two days before a scheduled demolition hearing.

Built in 1922 for Charles McCanless, son of Napoleon Bonaparte McCanless, the two-story house is listed as a “contributing structure” by the National Register of Historic Places and is in the West Square Historic District.

According to the news release, the foundation says the Ellerbees are uniquely qualified to renovate the house, having recently restored a home believed to be beyond repair in a downtown adjacent neighborhood in Durham. They will begin work to stabilize the McCanless-Busby-Thompson House immediately.

Historic Salisbury Foundation is a private, nonprofit organization whose mission is to preserve, protect and revitalize the historic fabric of Salisbury and Rowan County.

Anyone interested in the foundation may contact the office at 704-636-0103 or office@historicsalisbury.org. It receives no tax money for operations. All donations are tax-deductible.

Staff report The Post has an updated list of polling places for Election Day — Tuesday, Nov. 7. The following... read more