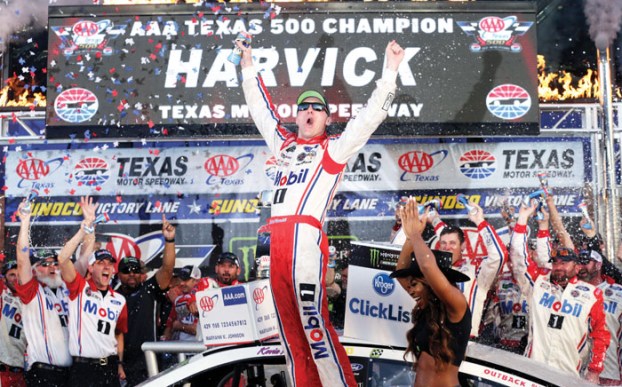 FORT WORTH, Texas (AP) — The timing was perfect for Kevin Harvick’s first NASCAR Cup Series victory at Texas. So was his winning pass.

Harvick went around the outside of Martin Truex Jr. for the lead with 10 laps to go, then stayed in front the rest of the way Sunday to earn his championship shot in NASCAR’s finale.

“It’s been a long time coming,” said Harvick, who had won five Xfinity races and a NASCAR Truck race there in the past. “Great to check that one off.”

Truex led 107 of 334 laps and was still up front until his bobble on the backstretch that allowed Harvick to take the lead. But Truex, with a significant points lead and wins in three of the eight playoff races, also locked into one of the four spots to race for the championship at Homestead in two weeks.

“A little disappointed to come up short, but to clinch a spot in Miami is unbelievable,” Truex said. “Definitely got the job done today, and came here and did what we needed to.”

Kyle Busch had already clinched a championship spot with his win at Martinsville a week ago to start the third round of the playoffs. That leaves only one spot up for grabs among the five remaining playoff contenders next week at Phoenix.

After doing a long burnout along the frontstretch in the No. 4 Ford for Stewart-Haas Racing, Harvick went to Victory Lane, where the Texas celebration was missing the traditional firing of six-shooters by the winner.

TMS officials bypassed the use of the pistols after a man opened fire inside a church in a small community about 300 miles south of the track near San Antonio earlier Sunday. Authorities in South Texas said the shooter killed more than 20 people and wounded at least 10 others before being killed or killing himself.

Denny Hamlin, another of the playoff contenders, finished third, while Brad Keselowski was fifth and Ryan Blaney sixth. Chase Elliott finished eighth, and his teammate Jimmie Johnson dealt with a loose car all day and finished 27th.

Keselowski dropped from third to fourth in points, 57 behind Truex. Hamlin is fifth in the standings, followed by Ryan Blaney, Elliott and seventh-time Cup champion Johnson.

“I’d feel confident if we were locked in. These races you don’t know what’s gonna happen,” Keselowski said.

Elliott knows that feeling, having been in the lead and two laps shy of the checkered flag at Martinsville before getting wrecked by Hamlin. Instead of the possible win then that would have clinched a championship spot, he now likely has to win at Phoenix to advance.

“Yeah, I guess. … I assume so,” Elliott said. “We’ll just go on to Phoenix. We are going to try our best, try to get a victory and go on to Homestead.”

Harvick felt good about his car all day, but had to earn the victory in Texas. Tony Stewart, the former Cup champion and car owner, liked what he saw in those last 20-25 laps.

“It wasn’t just the fact of winning this race, but it’s just how it was won,” Stewart said. “I know Kevin, and I can tell watching his driving style, there’s something that field and those other three guys that are going to make it to Homestead here in a couple of weeks, they’ve got something to be worried about.”

After several laps chasing down Truex, Harvick was eventually able to get around the No. 78 when he executed on a cue he had taken from watching Kyle Larson driving really deep into turn one earlier in the race.

Then to Victory Lane and a championship shot.