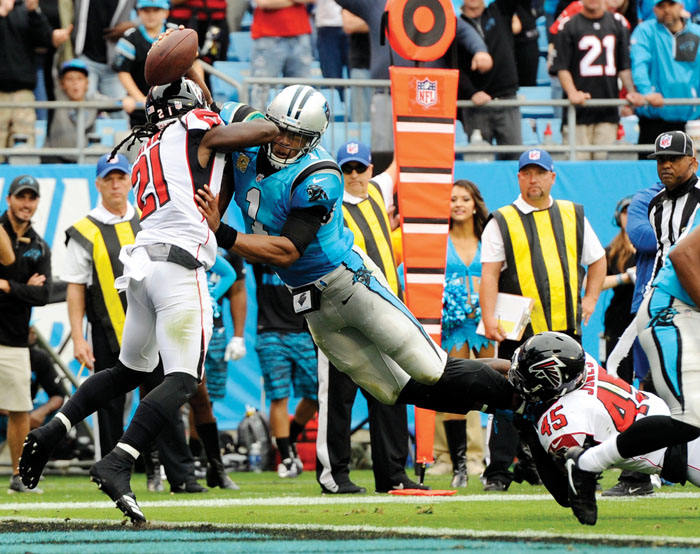 Carolina Panthers' Cam Newton (1) dives over the goal line for a touchdown against Atlanta Falcons' Desmond Trufant (21) and Deion Jones (45) in the first half of an NFL football game in Charlotte, N.C., Sunday, Nov. 5, 2017. (AP Photo/Mike McCarn)

CHARLOTTE (AP) — Cam Newton felt the Carolina Panthers needed an emotional lift. He gave them one on Sunday.

An energetic and seemingly motivated Newton ran for 86 yards and a scored on a head-first diving 9-yard touchdown run as the Carolina Panthers erased an early 10-point deficit to beat the NFC South-rival Atlanta Falcons 20-17.

Newton pumped his fist, flexed his muscles and played up to the crowd in a game he knew the Panthers (6-3) had to have to remain a half-game behind the first-place Saints in the NFC South.

“When the Panthers are emotionless, good things don’t happen,” Newton said. “If we can get Bank of America Stadium with a pulse, that’s when we are at our best. And that is what I was trying to do.”

Newton was coming off an emotional week in which his top target — and best friend on the team — Kelvin Benjamin was traded to the Buffalo Bills.

With Benjamin gone, the Panthers turned to back to their running game, racking up a season-high 201 yards on the ground. Newton led the Panthers’ rushing attack for the fourth straight week, while rookie Christian McCaffrey added a career-high 66 yards rushing and a touchdown. Devin Funchess, now Carolina’s No. 1 receiver, had 86 yards on five catches.

And another tough loss for the Falcons (4-4).

Atlanta continued to struggle running the ball, Matt Ryan had a costly first half interception and a wide-open Julio Jones dropped a 39-yard touchdown pass in the end zone.

“With fumbles and drops and things like that, we’re not trying to do it,” Jones said. “It’s just happening, We are not taught to drop balls or fumble balls. It’s just the luck of the draw right now.”

The Panthers spotted the Falcons 10 points before the game turned late in the first half, with Carolina scoring two touchdowns in the final 2:35 to take the lead for good.

The Falcons failed to convert a fourth-and-1 at the Carolina 35 when Devonta Freeman was stuffed at the line of scrimmage by a gang of Panthers. With the crowd fired up, Newton took just six plays to get the Panthers into the end zone, shuffling a pitchout to McCaffrey for a 4-yard score.

Ryan, who threw for 313 yards and two touchdowns, tried to get the Falcons more points before halftime but the strategy backfired when his receiver slipped and Mike Adams intercepted his pass and returned it to the Atlanta 25.

Four plays later, Newton leaped from the 3-yard line and flew through the air before he dunked the ball on Falcons cornerback Desmond Trufant for the score. Newton turned to the crowd and began jumping up and down repeatedly, thrusting both arms in the air.

“He’s gifted,” Funchess said with a smile. “I just try to go out and be as gifted as him.”

The Falcons cut the lead to 20-17 on a 19-yard touchdown reception by Tevin Coleman with 3:25 remaining in the game, but Carolina’s defense kept Atlanta from scoring on its final drive to seal the win.

With six catches for 118 yards, Julio Jones became the first receiver to surpass 100 yards receiving against the Panthers this season.

But Jones will likely remember the one he didn’t catch. The perennial Pro Bowl wide receiver’s drop with 8:12 left would have cut Carolina’s lead to three.

“There are no excuses, just a missed opportunity,” Jones said.

Said Ryan: “He makes that play 100 out of 100 times. He’s made more plays on this team than probably everybody.”

Panthers safety Kurt Coleman immediately ran over to console Jones, putting his arm around him after the drop.

“He said some spiritual things to me,” said Jones, who had never met Coleman before. “I guess he’s a very spiritual guy.”