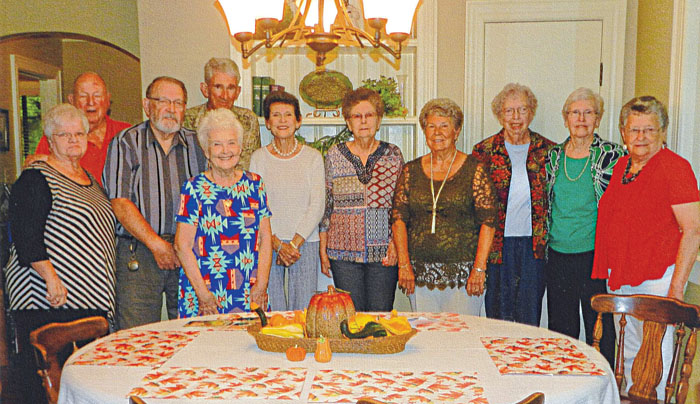 The 1945 class of Rockwell High School celebrated its 72nd class reunion on October 20, 2017. Ten students and six guests enjoyed lunch at Blue bay Seafood Restaurant. Past memories were recalled of their school days and all enjoyed catching up with family events. We are looking forward to our next reunion in October of 2018.

On Sept. 17, 2017, the 67th Annual Trexler Reunion of the descendants of Lawson Alexander and Lula Moore Trexler was held at Rockwell Park with approximately 67 registered in attendance.

Recognitions went to the oldest family member present, Hazel Trexler-Campbell (94 “and a half” years young); the youngest family member present, Grayson Coble (2 months old); the family member traveling the farthest to the reunion, Tina Trexler (235 miles from Knoxville, Tenn.); the most newly married family couple (George and Amy Almond, married on April 22, 2017), and the longest married couple (John and Vetra Culp, having been married for 55 years).

Next year’s host family is the Maude Wilma Trexler Smith family for the reunion which will be held on Sunday, Sept. 16, 2018, at Rockwell Park.

The Rockwell High School Class of 1952 enjoyed lunch, fellowship and much fun on Saturday, Oct. 7, at the home of class member Sue Misenheimer, as they celebrated their 65th reunion. Sue and Norma Jean Lester prepared and served a delicious meal to eight class members and five guests. Mike Conry graciously offered to pick up the cost. The tables were decorated with lovely fall colors.

We are fortunate to not lose any classmates or spouses this past year.

After lunch Sue led a discussion where we remembered 21 deceased members as we recalled personalities and fun stories. We also shared information about those who could not be present, several due to health issues. Some sent good wishes. Those present shared fun stories of our years in school.

The class of ‘52 meets annually and is looking forward to 2018 when they will again laugh, tell stories and enjoy each other’s company.

Amy Earnhardt Blackman, descendant of Charlie Edward Earnhardt, welcomed everyone and gave the blessing before the covered dish lunch. A collage was made of the 2016 reunion descendants, and copies were given to everyone. Past reunion pictures were on display. Fall arrangements decorated the dining area.

Marriage since the last reunion was Gary and Faith Earnhardt (Charlie Edward Earnhardt).

The Rowan Redbuds Garden Club met Thursday, Oct. 26, at Foil-Tatum Park in Salisbury. President Carolyn Alexander presided. If you are interested in visiting the club, call 704-637-0928 for more information.

Meet Salisbury city officials, enjoy food, fun and fellowship, the Salisbury’s Got Talent talent show and a hot air balloon demonstration. Bring a chairs. Sign up sheets for Quadruple “E” will be available.

Quadruple “E” is a program sponsored by concerned citizens who want to see youth age 8-16 empowered with the tools necessary to reach their maximum potential.

Beginning in November will be an 8-month program to educate, empower, encourage and entertain the youth of our community, every Saturday of the month from November-next June.

For more information, contact A.J Alexander at lalexanaj@gmail.com, 704-636-9139 or Darlene Scott at bellemajesticff@gmail.com

Songs from Poulenc, Hundley and Frazelle, and arias from Handel and Dvorak were featured.

McGill is a student of Levone Tobin-Scott, formerly a professor at UNCG. This season, there will be a local performance in March, 2018 at the First United Methodist Church of Salisbury.

McGill has performed with Opera Carolina, and starred in major roles with the Charlotte Opera and Charlottetowne Players.