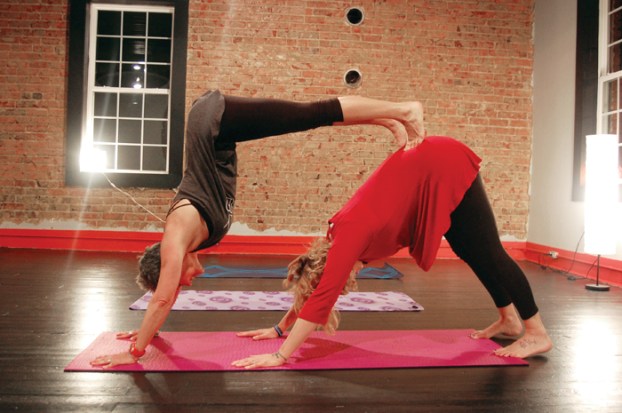 New yoga studio is a soulful addition to SoFul neighborhood

“West Asheville had a renaissance where people that were more interested in the arts and working collaboratively…really brought the renaissance together,” Bohland said.

Bohland — who owns the building that has Mean Mug Coffee, Better Loafing Artisan Bread Company and 10thread on South Fulton — said that she’s seeing the same thing beginning to happen in SoFul.

She feels this way, in part, because of her building’s newest tenant — SoFul Yoga and Wellness Studio —which is located above Mean Mug Coffee at 1024 South Fulton St.

“There’s been a vision for what the space in our neighborhood would be,” Bohland said. “People would have a place for inspiration, reconnection with themselves. A place where we celebrated everybody in the community. A good place with a good soul.”

Bohland first showed the space to Nye Hartwick — one of the eight teachers who started the SoFul Yoga studio — earlier this year.

“And when I saw it, I walked in and I thought, ‘God, what a beautiful yoga studio,’” Hartwick said.

Hartwick is on the board of directors for Happy Roots — which is in a building that Bohland also owns — and has been doing yoga for 23 years.

Hartwick said that, after Bohland showed her the space, she “tucked away” the idea of starting a yoga studio there.

“There were no studios in Rowan County, that I know of. … So some were teaching at the YMCA. I was teaching at a dance studio,” Hartwick said. “And then Emily (Ford) dropped into one of my classes and, although we were friends on Facebook, we had never personally met.”

Hartwick and Emily began reaching out to other teachers, via word-of-mouth and social media.

“And Emily apparently knows everybody in Rowan County, so all of the sudden everybody just kind of started coming together,” Hartwick said.

Ford said that the eight teachers met for the first time in person in July. Hartwick said that they started paying rent for the space in October.

“And we were allowed to come in in September and start cleaning up. This space was halfway done with some construction, so there was construction lumber, trash, dust, dirt. Maybe ancient bodies, I have no idea. This space had not been used in a very long time and, when we all came up to look at the space the first time, I think everybody kind of had to take a deep breath and really put on their HGTV glasses,” Hartwick said.

Using an app called Slack, the women coordinated who would clean the space, paint the floors and sew the curtains.

“We all brought a different skillset to the table. And it was pretty cool how everybody just kind of picked her forte or whatever she already knew or what she was already good at and just kind of came together,” Ford said. “It was a synergy; it really was.”

The studio opened Oct. 23 and offers 18 classes a week, as well as two monthly classes.

Hartwick said that, for anyone who thinks they are not “the right shape, size, whatever” for yoga, they should come and try a class anyway.

“If you’re not sure which class would work best for you, contact anybody here at the studio. We would be happy to direct them to the class that would best suit their needs. Anybody can do yoga. Absolutely anybody can do yoga,” Hartwick said.

For more information about the studio, visit sofulyoga.com or the SoFul Yoga and Wellness of Salisbury Facebook page.