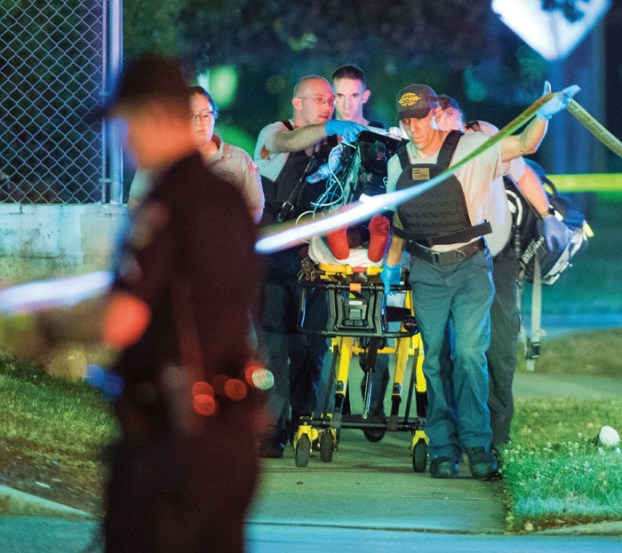 A shooting victim is taken to an ambulance outside Taco Bell in Salisbury Friday night. He later died at the hospital. Jon C. Lakey/Salisbury Post

A 30-year-old man died Friday night after being shot in the parking lot of Taco Bell on East Innes Street. If it were  possible for a city of 34,000 to speak with one voice, Salisbury would say, “Oh no, not again.”

This brings to nine the number of people who have died as a result of gun violence in Salisbury so far this year. That’s a sad fact. Yet there’s reason to have hope about curbing this trend.

After racking up a list of a dozen or more unsolved murders in recent years, the Salisbury Police Department has been able to identify and charge suspects in all but the most recent of this year’s killings (as of this writing). Help from the Rowan County Sheriff’s Office and the State Bureau of Investigation has made all the difference as the police department works to fill its vacancies and train new officers.

A shooting in the parking lot of a popular fast-food restaurant at 8:44 at night — with one person killed and shots hitting several cars — is harrowing. What if people had been hit in the cars, too?

But no one in Salisbury is shrugging off this crime or wearing blinders about what it means for the city. Though concrete solutions are few, City Council candidates realize the importance of reining in crime.

Part of the problem is economic; people who can’t land good jobs turn their attention elsewhere. Idle hands are the gang recruiter’s workshop.

Rays of hope shine in that area too, according to statistics from Rowan’s NCWorks Career Center. The unemployment rate is less than half of what it was just five years ago, falling from 10.2 percent to 4.1 percent.

The jobless rate may not be a true measure of how many people need jobs. Some people give up looking and therefore fall out of the count. Others are underemployed, making less money than they did at better jobs. But those asterisks were present in 2012, too.

A job fair to be held Wednesday at First Ministry Center on North Fulton Street will include nearly 50 businesses and agencies looking for employees.

Debbie Davis at NCWorks says the hiring picture is much better than it was five years ago. This upswing is not the equivalent of reviving the textile industry or gearing up three shifts at Freightliner, but we’ve emerged from a long, dark period.

Part of the solution to Salisbury’s crime problem is prevention in the form of programs for youth — both to keep young people busy with constructive activities and to boost literacy —  from the YMCA to Tsunami Development Literacy Program to Power Cross.

Greater collaboration among all these groups could help. Instead of having dozens of programs going in different directions without consulting each other, why not collaborate and get on the same track? Compare notes and client lists. Figure out who’s falling between the cracks and how to reach them.

This teamwork approach is at work on at least two other fronts in Rowan — literacy and health.

To boost literacy, Ready, Set, Read … Rowan pulls together every agency addressing early chidhood wellbeing and education to work together. The idea is to find out who offers what service, identify gaps and work together toward helping all children read at grade level by third grade, a pivotal point in a child’s development.

Healthy Rowan does the same thing on the health level, bringing partners together to identify and address quality of life issues for the county to improve health for all ages.

If we have groups working together to help people read and be healthy, could we also collaborate on producing law-abiding citizens?

Then again, if kids grew up reading well within families that were healthy, maybe they’d automatically mature into law-abiding citizens.

Kudos to the law enforcement agencies for coming together to work on reducing crime in Salisbury — Salisbury Police, Rowan Sheriff’s Office, the SBI, ATF, FBI and Department of Justice.

Go the other way — poor literacy, poor health, with addiction and neglect added in — and you’re creating a fertile field for crime. Contact with police for young people coming out of such situations will be frequent and punishing.

If they live that long.

Letter: A fair shake for voters

So glad to read that the higher court is going to look at this redistricting. I was gerrymandered from the... read more