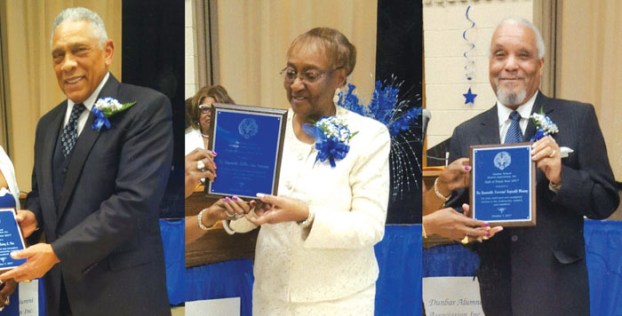 Approximately 200 alumni, friends and guests participated in the 2017 Gala hosted by the Dunbar School Alumni Association, on Oct. 7 at the Salisbury Civic Center. Our biennial gala is held to generate funds for scholarships to be awarded to descendants of former students, teachers or administrators of Dunbar School who are current financial members.

The highlight of the evening was the induction of three alumni into the association’s Hall of Fame: Larry Poe, Willie Jean Kennedy and Rev. Reginald Massey.

Retired Rear Admiral Larry Poe was a member of the class of 1961. He attended Livingstone College before transferring to UNC Chapel Hill, where he received a B.S. degree in science. Poe received advanced degrees from several institutions of higher education prior to enlisting in the United States Navy where he eventually earned the rank of Rear Admiral.

Willie Jean Kennedy graduated as the Valedictorian of the class of 1962. Kennedy attended Livingstone College as one of the first recipients of a Future Teacher Scholarship provided by the State of North Carolina. After graduating with a BA degree in English, she was hired to teach English at the school from which she graduated, and has since provided more than three decades of service to the students and teachers in the Rowan-Salisbury School System. She is currently completing her third consecutive term on the Rowan County Board of Education.

Rev. Reginald Massey was a member of the class of 1964. He earned a BA degree in Sociology from Livingstone College and a master of divinity degree from Hood Theological Seminary. Rev. Massey is recorded in historical records as the first African American mayor of the Town of East Spencer. During his three terms as mayor, Rev. Massey was appointed to the Intergovernmental Commission by the governor of North Carolina. After his tenure as mayor, he worked as a chaplain at the William “Bill” Heffner VA Medical Center. An ordained minister, Rev. Massey also pastored at several AME Zion churches.

‘I’m not a quitter’: N.C. State’s Davis Richards is determined to overcome narcolepsy

By Susan Shinn Turner For the Salisbury Post RALEIGH — Davis Richards and his coach bump fists as they chat... read more